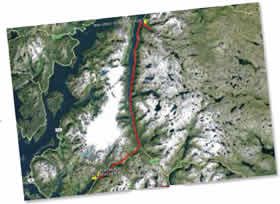 Almost every phone, tablet, or other personal digital device on the market today utilizes GPS in some fashion. Position data is typically provided by an internal GPS receiver, however, the accuracy of these receivers and the time they take to fix your position can vary greatly. The time to fix can be particularly slow when away from reliable cellular service. A 3G-device GPS receiver uses Assisted GPS data from cellular-network towers to reduce startup and signal lock times. As part of this assist, the cellular network acquires and stores information about the satellites, allowing the devices internal GPS to use it without having to download it.

The downside here is that unlike even the simplest handheld GPS, you can’t determine which satellites the device is using or check their accuracy. Another disadvantage of internal GPS receivers is the additional power draw they require, which can shorten a phone or tablets battery life considerably.

To rectify these problems, Bad Elf created the GPS Pro, an external Bluetooth wireless GPS receiver and data logger. Bad Elf is a U.S.-based company that designs and manufactures niche hardware and software with an emphasis on Apples Made for iPod program.

The GPS Pro is designed to work with a wide variety of iCritters (iPod Touch, iPhone, iPad), be they cellular or WiFi only. Bad Elf states that the company is planning a firmware update that would open the Bad Elf GPS Pro up to work with other operating systems, including Android-based systems, and laptops, but they have given no specific target date.

The Pro can simultaneously share GPS data (latitude, longitude, altitude, speed, and heading) with up to five Bluetooth capable i-devices. In addition to providing GPS info, its also a standalone data logger that allows you to record up to 100 hours of trip location data. After downloading the Bad Elf app, you can transfer and enjoy a geographical view of your travels, as well as share it with friends and family via email, Facebook, or Twitter.

The 3.2-ounce, palm-sized GPS Pro can be easily carried or worn around the neck using the provided lanyard. All functions are accessed by three buttons, while information is shown on a grayscale backlit LCD display (backlighting can be toggled on or off with a quick push of the power button).

The Bad Elfs battery life is approximately 16 to 20 hours when paired with a device, 30 to 35 hours when not paired (i.e. Bluetooth off). Changing the units default data rate from 1- to 10-second intervals increased battery life in tests, which accounts for the ranges we reported.

We used the GPS Pro while hiking and sailing in Norway and were able to get satellite fixes inside sailboats, ferries, even at cruising altitude in a jet. During the course of the field testing, the unit was dropped several times, used in torrential downpours, banged around on the outside of a backpack for several days, and left to bake on a car dashboard. It survived-as it should.

Testers found operation of the three button controls to be simple, straight forward, and intuitive. The screen is small, but it still provides good readability at night and in bright sunlight, although visibility is distorted when using polarized sunglasses.

We paired the unit with a wireless-only iPad 4 and used it to provide GPS info for two navigation programs, Navionics and Navimatics (PS, February 2012), with satisfactory results.

We also downloaded the Bad Elf utility app and gave it a spin. It was simple to use and provided impressive views of the various hikes and trips saved using the datalog feature. The app also allows you to get and display the same position and status information as shown on the smaller Pro display, but in a much bigger format.

One thing testers liked about the GPS Pro was the wireless feature, which eliminates the hanging dongle dilemma with similar devices.

As for cons, although well-constructed, the splashproof-only rating could be an issue in the marine environment. This is further exacerbated by the tethered, plastic mini-USB charging/data port cap, which is loose and prone to falling out. (Bad Elf said it is aware of this and is working on a solution.) Another negative, in our opinion, is the Pros use of a non-user changeable battery, which means the unit will have to be returned to the manufacturer at some point for battery replacement.

Improvements wed like to see: increased stand-alone GPS features (waypoints, navigation, time, and distance calculations, etc.) would be nice. A fixed mount/charging station would also be a plus.

The Pro has a suggested retail price of $180, however, a quick online search yielded prices just over $100, which makes it a cheaper option than purchasing a cellular iPad just for the internal GPS feature.

Bad Elf recently introduced a new plug-in GPS designed to match up with the latest generation of Apple products, equipped with the Lightning Connector. This compact plug-in GPS receiver turns your phone or iPad into a chartplotter, and has a suggested retail price of $130.

For those looking to add GPS functionality to a WiFi-only Apple device or simply increase the accuracy of any Bluetooth device, the GPS Pro is a well thought-out unit that combines wireless convenience with improved GPS accuracy.