There are lots of things that can make being aboard a boat unpleasant. Among them: Too little wind, seasickness, crowded waterways, rain, guests with individual bottles of sun tan oil, too much wind, bugs, a Wagnerian mother-in-law, no more ice-the list is so long that one wonders occasionally…

Allied with too little wind is too much heat, especially when anchored, at a dock or in a following breeze that exactly matches your speed.

Thats when the wee word fan looms large. The word has special meaning for those who do their sailing in tropical climes, where fans are de rigueur. (Air conditioning? Tres bien!)

Whether trying to do chart work, prepare a meal, grab a nap or read a while, the need to move air is particularly acute below in the cabin.

Static devices (like Dorades and fabric scoops) to direct air through the cabin are useless if there is no air movement to direct. Thats when one can fall in love with anything that makes a breeze.

We collected almost a dozen fans-just about everything on the marine market-and put them through their paces.

Most of the fans are meant to be bulkhead mounted-plus one to place in a portlight. Included are fixed, oscillating and directionally adjustable fans, most with caged blades, but one with open soft blades.

Most are 12-volt models, but several are for dual or even triple power sources. The names are familiar-Guest, Hella, Caframo, BOAT/U.S., West Marine, but some of the fans are Far East knockoffs which invite a look askance.

We even included a fan which we-and a lot of readers-hold in high regard. It is Caframos Model 737, which runs on 4 D cells, or with 6V supplied by a 110V or 12V adapter. It can perhaps serve as a general benchmark to air flow. If you examine the photo on page 15, it seems almost certain that you will recognize this popular fan.

Another fan that makes this what could be called an apples-and-avocado test is a new cabin ventilator made in Michigan. This 110V or 12V fan is meant to be mounted in a fore hatch or companionway, and quietly draw air through the entire boat. We suspect it would most often be used dockside.

The Test
In putting the fans through their paces, the primary interest was in how well they move air, close up and at several more distant ranges.

The air speed readings were taken at three distances-very close up, at 1′ and at 3′. Because some fans seem to generate the greatest air movement in a ring coming off the tips of the blades while others appear to produce what might be viewed as a focused shaft of air near the hub, the anemometer was handheld to feel always for the highest velocity. The anemometer used was Speedtechs Skywatch Elite, which has a convenient maximum reading window.

Close behind air volume in importance was the power consumed; its almost always a concern. The amperage was read with an auto-ranging, LCD digital multimeter.

Noise is a factor, too, so each fan had its decibels read with a Quest sound level meter. The meter was moved around to pick up the maximum sound. For guidance, ordinary conversation is about 60 dB; 85-90 dB is considered the level at which some danger of hearing loss begins. A food blender goes about 95 dB, an outboard engine about 100. A 10-point difference in dB is very significant.

It must be noted, of course, that the volume of air, the noise and the power consumed are inextricably linked.

You can do your own blending with the test results, which, along with the customary specs like weight, price and warranty, are displayed on the chart on page 16.

The Field
Taking them alphabetically, as they are on the chart, the two Caframo fans, made by a Canadian company that specializes in blade design, are the open-bladed, 12V 747 (also known as the Ultimate, and available either with a suction-cup, wall-mount or clamp base) and the 737 or Mini-Max mentioned immediately above. The 737, normally powered with 4 D cells, can be hard-wired with either of two optional converters-a 12V/6V box ($8.99) or a 110V/6V version ($9.99). In all respects, the Caframo fans are high quality.

The two fans carrying the label Carlyn are Chinese imports sold by BOAT/U.S. The large one, an oscillating or fixed position wall-mount, looks identical to one sold by West Marine…except for the round label stuck on the hub. (The label had fallen off the BOAT/U.S. version.) The small Carlyn, a box-shaped, fold-away wall-mount that operates on 4 AA batteries or a 12V transformer, is a Chinese near-knockoff of the Guest Fold-Away, except that the Guest is straight 12V, has a fuse and appears to be of much higher quality. However, they tested about the same.

The two Austrian-made Hella fans are all-plastic, light and appear to be of excellent quality, but a bit expensive. The larger, two-speed Hella doesn’t move air like the three oscillating fans in this test, but it uses far less power and is much quieter.

The little Hot Wire is puny on low speed and an annoying hummer on high. It comes with two loops of shock cord that permit it to be mounted in a portlight (see photo) and used as an exhaust fan. Its a clever idea, but somewhat rudely executed.

The Seafit oscillating fan sold by West Marine appears to be, as mentioned above, the same as the Carlyn oscillator…except that it did not test quite as well.

The big Kool-O-Matic exhaust ventilator, meant to be mounted in a 17″ or larger hatch, is similar to a residential window fan. Mounted in a fore or main hatch, it would exhaust air in a hurry. It comes with a thermostat and manual on/off switch for a variably speed motor. Available in 110V or 12V models, this new fan is expensive. Because of stowage problems when underway, it probably is best for dock-side usage. Because it is entirely different, we did not test it.

The Longevity Issue
What we cannot do easily is ascertain just how long each fan will last before breaking down.

And break down they will…if you use them month after month, for years, piling thousands of hours on the brushes and bearings.

The issue of longevity was raised by our editor-at-large, Nick Nicholson, who is off in the tropics aboard Calypso. About 500 miles offshore, the smell of cooked wiring sent him scrambling. He found that a Hella Turbo fan (he has seven of them aboard) had fried its internal controls. The Hella fans Nick wrote about in the Offshore Log are made in Austria.

In a subsequent letter, Hellamarines Reese Bishoff explained that for a time Hella fans used 2,000-hour motors made by a new motor supplier. Bishoff said that Hella, Inc., in the United States, realized that 2,000 hours was not enough for equipment that often runs 24 hours a day. He said Hella introduced its new 5,000-hour motors in January of 1998.

Another illustration of longevity was our test in 1994 and 1995 of the above-mentioned Caframo Mini-Max. Operated with D batteries, it ran continuously for 767 days-about 18,000 hours, before it quit. It led us to conclude (in a October 15, 1995 report), We cannot recommend this fan if you expect it, in normal use-maybe 25 times a season for a couple of hours at a time-to run for more than 350.2 years. In the 24-hour tropics, its a two-year fan.

Following our bench tests for air speed and noise, we mounted two oscillating fans and two regular fans on a board-the Guest, Hella Turbo, Caframo and Seafit-and let them run continuously. It was anticipated that after they were securely mounted, wired through proper fuses to a good transformer and turned on, thered be nothing to report for months, perhaps even a couple of years. Not so.

Several manufacturers may be displeased, but there is no reason not to give Practical Sailor readers this interim report.

The Seafit failed after running only 21 hours. It started making a grinding noise. When turned off and back on, it did not turn the blades. Attempts to kick start the fan by twirling the blades did not work-with or without the oscillator.

The other oscillating fan-the Guest-quit running after 123 hours, a little more than five days. When the oscillator mechanism was turned off, the fan blade started turning again. It ran for another 82 hours, stopped and could not be induced back to life.

Neither the Seafit nor the Guest blew their fuses. They just stopped running. When the test is finished, they will be dismantled to determine what failed.

As of the time this was written, 1,540 hours or more than two months after the test commenced, the Hella and Caframo press on.

The Bottom Line
One way of ranking these fans is to place them in order according to the air velocity produced per milliamperes consumed. The range is not insignificant. The best fan produces a velocity more than four times that of the poorest.

If done that way, Caframos 737 portable ( the 4 D cell or 12V model, run on low) is best. Next in order would be the Hella Turbo (run on high), the Caframo 747 open blade (run on low) and the single-speed Hella Jet. The actual figures are shown on the chart.

Another column on the chart shows the decibels produced by each fan. Again, there are remarkable differences.

For pure flat-out wind velocity, the chart displays three ranges, with the best figures generally recorded by the oscillating fans from Guest and Carlyn. We do not know why the West Marine fan, which appears to be identical to the Carlyn, produced different numbers. If you want an oscillating fan and can tolerate the noise, the Guest is the clear choice over the two Chinese knockoffs.

The combination of rankings on the chart should permit you to select what best meets your needs.

In our view, the Hella and Caframo fans are superior. The Hella models draw less current but lack the power of the Caframo fans, which are Best Buys-unless you want an oscillating fan. But we haven't yet found an oscillating model that lasts long enough to recommend. 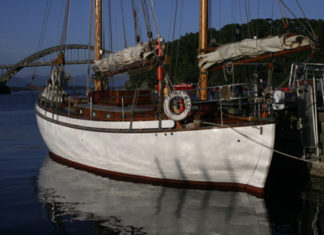 June 9, 2021
One of the most common questions we get regarding marine varnish is what kind of finish is best for a mast. Even though aluminum has long since replaced Sitka spruce as the material of choice for a sailboat mast, there is no shortage of boats that still have wooden masts. Many of the Taiwanese-built boats of the 70s and 80s had wooden masts, and of course, a wide range of U.S.-built classics still have their original wooden masts.