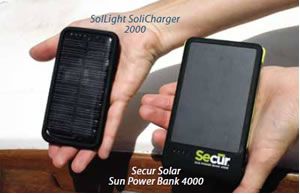 Testers recently took a look at two portable solar-powered chargers for small electronics-one of them is new to the market, the Secur Solar Sun Power Bank 4000, and the other, Davis Instruments SolLight SoliCharger 2000, is an updated version of a product we reviewed a few years ago.

Weighing in at a scan’t 4.2 ounces, the Sun Power Bank has a 4,000-mAh, 3.7-volt, high-capacity lithium polymer battery that can recharge an iPhone twice without needing its own recharge. Four LED lights on the 4000s face indicate how much power is available.

During tests, a fully powered Sun Power Bank 4000 had no problem charging two cell phones in less than an hour. When we re-tested with only 10 to 40 percent power available, the Sun Power Bank was still able to charge an iPhone from 40 percent to 75 percent within a half-hour.

The Sun Power Bank is not waterproof, but it comes in a rugged, lightweight plastic case. It retails for $69. Testers found Secur Solars customer service to be prompt and helpful.

The SoliCharger 2000 is a small, lightweight, solar-powered charger designed to power up smartphones, MP3 players, cameras, and other smaller electronic devices. We reviewed the 2000s predecessor, the Simply Brilliant SolLight Solicharger, in the November 2010 issue and the SolLight SoliCharger-SP, a solar charger with speakers for a phone or MP3 player, in the October 2012 issue. (Davis Instruments recently acquired Simply Brilliant.) Testers gave both those products the thumbs up as good buys, so we were hopeful the new 2000 would impress as well.

With a 2000-mAh lithium-ion battery, the SoliCharger 2000 doesn’t quite carry enough power to fully charge larger electronics such as iPads and other digital tablets-unlike the Sun Power Bank 4000-but it had no trouble charging an iPhone in tests and can top off the larger devices.

The 2000 has a solar panel output of 120mA at 5 volts. According to the maker, it can be fully powered up via a USB output in two to three hours. In the direct sun, the 200 can fully charge in 20 to 24 hours, Davis said. Our tests found these claims to be accurate when in the direct Florida sun. Testers found the SoliCharger 2000 was unable to charge past 40 percent when charging on a cloudy day, or when placed in indirect sunlight.

When Davis acquired Simply Brilliant, it also acquired the SolLight products that Simply Brilliant had in stock. That means only 700 SoliCharger 2000 units are available, and they are being sold at a substantial discount: $20 each. The chargers are not on the company website, so buyers will have to call Davis direct. Also, the USB cables that come standard with the unit may not match up to some newer smartphones, so be sure you can get what you need.

Testers found Daviss customer service to be quick to respond.

Both companies offered excellent customer service, with quick, helpful responses. The SoliCharger 2000 topped its predecessor, but it is an older model, and with a limited supply, the only reason wed choose the 2000 over the Secur Solar Sun Power Bank 4000 is its deeply discounted price.

The Sun Power Bank 4000 is a more advanced, more relevant charger, offered at a great price; we recommend it. Secur also offers a mini charger for $30, and a beefy, water-resistant 6000 model with dual ultra-high efficiency solar panels for $129. If you want music speakers on your charger though, youll have to return to the SoliCharger-SP.