As a USCG Master who does offshore deliveries, I rely on accurate and current weather forecasts. After exploring several options, I finally settled on a satellite-based system that not only enables me to get affordable, accurate forecasts, but is portable enough to take with me from boat to boat. In this part one of a two-part series, I’ll describe some of the options for obtaining weather data.

The first step in evaluating how to get weather at sea was to identify the options. Once outside the range of NOAA VHF radio broadcasts there are six general methods of getting weather aboard:

2. SSB receiver, often temporarily mounted, although it could be a permanently installed.

3. Satellite hotspot, such as Iridium Go

Each of these methods have their own strengths and weaknesses. Keep in mind that my decision was based on my particular needs as a delivery skipper—many sailors will have other priorities.

The PS archives library has a wide range of articles on this topic, found by searching under the term “weather.”

A fix mounted SSB radio remains an important part of communications for offshore vessels. But, particularly for a delivery skipper who moves from boat to boat, it has some shortcomings that modern alternatives have overcome. The SSB allows you to receive text, charts, and GRIBS (gridded binary “raw” weather data files generated by the US NOAA/NCEP). File size depends upon the amount of data requested and can be from a few tens of Kb upwards. Although you can automate the process, getting weather products dirctly via SSB requires the radio to be on, a modem connected, and a computer connected during the time of broadcast.

An alternative method to get GRIBs is to use an email service such as SailDocs (the originator of this service), or the many services that now that now provide GRIBs upon request. These servers respond within a 1-2 minutes with the requested data. Requesting the file directly allows one to get the GRIBs when the radio is manned and are ready. It is a good option if you already have a fixed SSB radio. You can also receive weather from weather routers like Chris Parker.

In addition to its ability to collect weather, an SSB is a powerful communication tool, allowing you to reach other ships at sea, as well as participate in the Global Maritime Distress Signaling System. 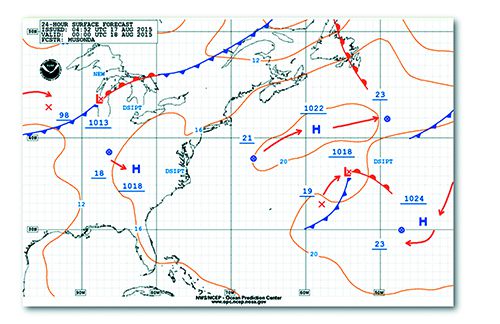 A single-sideband receiver is the least expensive way to receive weather, but you must often have an antenna installed to get good reception. Like SSB transceivers they have the ability to receive information from weather routers. They also do not have the ability to provide tracking. As such, the router will not know your location and can only provide a generic weather forecast.

Hot spots provide two-way text and voice communication, like SSB send/receive one can request and receive specific GRIB files. Hot spots can send tracking information, but one must engage a mapping service to see the track, or even location on a map. To use the hotspot requires a smartphone, tablet or computer. Hotspots also provide text and voice communications. The popularity of the device has prompted a number of new services that focus on delivering on-demand cloud-based forecast products, including Predict Wind (www.predictwind.com), Luck GRIB (www.luckgrib.com), Sea Tech (www.sea-tech.com), OCENS (www.ocens.com) and others.

At $60 a month (not including the black box reciever) and with only a limited number of weather forecast products, subscription services like the Sirius XM weather, which can be integrated into a chartplotter, were not an option for me.

Satellite phones offer the same functionality as a hotspot, with the addition of voice. Satellite phones like the Iridium 9575 Extreme, need to be connected to a computer—via the Iridium hotspot or a USB to collect weather data, which requires an external antenna.

Messengers are standalone device. Until recently I only used a previous version of the Garmin inReach. The ability to text provides an easy means of communication. They also offer tracking. The messenger can send/receive text messages with no additional devices, although connecting a smartphone via Bluetooth makes typing easier.

The messenger can receive weather as well as send/receive written updates from a weather router. Using the Garmin automated weather system, a prudent captain can also track moving weather patterns. It is also possible to get weather routing through an inReach by leveraging cloud routing services like www.fastseas.com, but the 160 word limit can be constraining.

One chief difference between a portable satphone and single-sideband radio is that the former is typically point-to-point device-one caller contacting one or more designated recipients. An SSB transmission can be received by any device within broadcast range listening on that frequency. As with any apples-to-oranges comparison of two different systems providing similar functions (both SSB and a satphone can deliver voice communications and email, for example) both will invariably have pros and cons.

Operationally, the most obvious advantage of a satellite phone is its familiar form and operation. Even a non-sailor who has never used a VHF can probably figure out how to use a satphone. Another advantage is that its easy to call a landline phone with a satphone. And, for the sailor who likes to do his own installations, the satellite device greatly simplifies setup.

A satellite phones portability is also a plus. You can bring it on shore excursions, or even bring it with you should you need to abandon ship.

There are also cons to handheld sat phones: just like cell phones, handheld portable satphones are not meant to provide ship-to-ship safety communications or communications with rescue vessels or aircraft. Private party contractors like GEOS Alliance will help route rescue calls placed via satellite devices to the Coast Guard, but the U.S. Coast Guard doesn’t advocate cell phone or satellite phone as a primary means for making distress calls. They have proven, however, to be a very effective backup.

One of the main reasons sailors choose a marine SSB over a satellite phone is so that they can participate in various regional safety and cruising nets that allow cruising sailors to stay in touch and share local knowledge-and if needed, ask for help. You don’t, of course, need a transceiver to simply listen to these stations or nets-an ordinary portable multi-band radio that can tune into SSB frequencies will do.

An additional safety benefit of the modern SSB is Digital Selective Calling (DSC). DSC is an essential element in Global Maritime Distress and Safety System. All commercial ships mandated to have DSC are required to monitor DSC marine SSB frequencies while at sea. In the event of an emergency, they can receive your exact location and nature of distress at the push of a button.

As with VHF DSC, the DSC function effectively takes the search out of search and rescue, allowing rescue agencies (or nearby Good Samaritans) to provide immediate assistance, rather than waste valuable time trying to locate you first.

Although direct cost comparisons between SSB and satphones will depend on the particular unit or system being considered, its fairly typical to find that the initial cash outlay will likely be a bit less for a portable satphone (particularly if installation costs of the SSB are factored in). However, a more accurate assessment is lifetime cost, which can be determined by factoring in the costs associated with each system over the years—.

For over-the-counter portable satphones, lifetime cost ultimately depends on the service plan selected, but it can mean hundreds of dollars in annual, recurring costs. For SSB, unless you’re utilizing some type of commercial service (for weather routing, email, etc), transmitting and receiving over the airwaves is free, and free is good.

Satellite messenger subscriptions services have a few shortcomings. First, while doing a transatlantic delivery the weather forecasts provided through the device stopped working. I emailed the firm that provided them. My email explained that we were mid-Atlantic.

It was impressive to receive a response in an hour. The weather service provider advised me to contact Garmin. I sent an email to the Garmin support team explaining my situation. Instead of responding to the inReach, Garmin emailed me at home. Fortunately, my wife monitors that email account and relayed the message. Garmin advised that the weather forecast would be down “for a few days.” I believe all three of us  aboard “cursed like sailors.”

Using my account with Chris Parker, we were able to get forecast and guidance. Although Chris is a very competent router and for the crossing, I like to take control of my own routing. Without GRIB files, it felt like I was sailing blind.

The inability to see GRIBs and the failure of the integrated weather forecasting relay was motivation for upgrading my onboard weather receiving equipment.

Evolution of Text Weather for Sailors

The satellite messenger was eliminated as a primary means of weather collection for the reasons cited above.

The SSB options were eliminated for a few reasons. First as a delivery captain, whatever I bring has to be easy to; carry, install, use, and remove from each boat.  SSB also does not provide tracking information. Therefore, the SSB transceiver was not an option for me.

Satellite telephones and hotspots were both considered. The telephone option was eliminated as the connection to a computer was wired. This brought me to the Iridium GO. It was simple, raise the antenna, use an optional small antenna mounted to the rail or in the cockpit and download. After investing $699, I was the proud owner of an Iridium GO. So far, I am very satisfied with the results. Next month we’ll look at Predict Wind an extremely helpful Weather App to pair with the system.