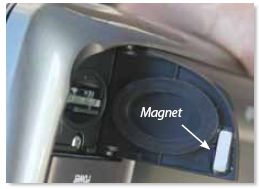 Practical Sailor evaluated the Garmin 740s chartplotter-sounder and other similarly sized plotter-sounders in the November 2011 issue. For this followup report, we took a close look at the new Raymarine e7D. The Garmin 740s and the Ray e7D are similar in size, and both have a baseline chartplotter with sounder functionality, but the e7D has many new-to-the-marine-marketp capabilities that include WiFi and Bluetooth interfaces to mobile computing devices such as iPads and iPhones. The e7D is also capable of being fully networked with other members of the new Raymarine chartplotter family and the C and E-series widescreen units, while the Garmin 740s was designed to be a standalone, multi-function display (MFD) system.

For this report, PS testers compared the basic functionality of the Raymarine e7D to the Garmin 740s. This included sounder capabilities, ergonomics, chart systems, interface capabilities, screen visibility, and installation requirements. We also looked at some of the new features of the e7 such as the UniControl rotary joystick, the Bluetooth RCU-3 remote control, and the WiFi interface app for mobile devices.

Fogging screens, water intrusion, poor visibility in bright sunlight, and slow redraw rates are the most common complaints we get regarding plotter-sounders. Better construction, new screen technology, and faster processors in our current crop of test units seem to have addressed these issues. None of the test products experienced serious problems during our environmental testing. Our tests focused on four key elements:

Ease of installation: Testers used accompanying literature to install the units as directed and evaluated instructions for interfacing with peripheral devices. They made two mock calls to customer support at lunch hour on a weekday, asked identical questions, and rated the responses.

Screen visibility: Three testers subjectively rated screen visibility in bright sunlight (with and without polarized sunglasses), at night, and in the shade. Screens were viewed from different angles. Dimming ability and palettes also were compared.

Environmental tests: Testers evaluated the units’ resistance to heavy splashing and rain to IPX6 standards, which require that a device withstands water sprayed through a 12-millimeter nozzle at a rate of 100 liters/minute for at least three minutes.

Sounders: Each sounder was rated for presentation and ease of use while following a test track on the Intracoastal Waterway (ICW) near Sarasota, Fla., and doing spot soundings over known structure. Speed during the ICW testing was approximately 6 knots and depths varied from 6 to 12 feet. Water clarity was about 3 feet, and water temperature was in the low 70s.

All units were first tested under default “auto” settings at 200 kHz. Sounder images under these settings were examined for clarity. Testers later manually adjusted the primary settings such as gain, zoom, and color palette, and evaluated image clarity. Key features such as bottom lock were also tested underway, as were some pre-set modes for detecting fish or bottom structure. Total distance covered for each sounder test was approximately 2.5 nautical miles.

The e7D is the smallest, and newest of Raymarine’s new series of networked MFDs, and it incorporates all of the features available in the larger e95 and e125 units.

This is a hybrid touchscreen unit, meaning it uses both tactile knobs and buttons coupled with touchscreen functionality. The e7D also has drag and drop capabilities, while the 740s is touchscreen only. The e7D and the 740s are very close is size (approximately 9 by 6 by 3 inches), and both have 7-inch diagonal daylight viewable displays with 800 by 480 WVGA resolution. GPS receivers and sounder modules are internal with both units. Interfaces for the systems include radar, NMEA 2000/0183, and AIS support.

The two units diverge when it comes to networking. The e7D can stand alone, but is also capable of being fully networked with the older E-series widescreen MFDs and the new e7, e95, and e97, e125, and e127 MFDs. The unit can also be networked with the non-touchcreen c95, c97, c125 and c127 MFDs. As mentioned, the new Raymarine MFD family now includes WiFi and Bluetooth wireless interfaces, along with touchscreen integration of the FLIR thermal vision cameras.

Because of its network capabilities, the e7D has some features that need to be enabled if it is being used as a standalone device, notably its internal sounder module and internal GPS.

The 740s comes preloaded with Garmin’s Blue Chart maps for U.S. coastal waters, and the e7D comes with a Navionics “USA Raymarine” microSD map chip that has the Navionics Silver charting package. This chart package is sold only to MFD manufacturers, and according to Navionics, the Silver mapping package contains the “Minimum content for safe navigation,” and therefore does not include any tidal or current data. Navionics does offer a migration path forward for Silver users to Gold or higher, starting at $169. The e7D uses micro SD memory cards and has two slots to accommodate them; the 740s uses the standard SD memory cards and has one slot.

Chart detail and presentation in the 2D chart view for both units were clear and well presented. The e7D with the Navionics chip allows color coding of water based on user-defined “Safety Contours” settings. For example, setting the safety contour at 7-foot colors all water that is 6 feet deep or less a dark blue, and deeper waters are lighter colors. The 740s color contours are fixed, with blue indicating waters that are 6 feet deep or less, and all other water is white. Upgrading to Garmin’s G2 Vision chip, however, enables a similar ability to customize contours on the 740s.

Testers did find the Navionics e7D’s 3D chart view to be sharper than the 740s, and they liked the speed and ease of use of the e7D’s Unicontrol.

Testers were reminded that the accuracy of these vector charts is not so precise as some users believe. At one point, both Navionics and the Garmin Blue Chart showed the test boat over the edge of a shoal when the it was well within the 12-foot-deep channel.

For sounder testing, the e7D was connected to a 600-watt Airmar P66 transducer, and the 740s was connected to Garmin’s 500-watt transducer. Both were transom-mount units. The Raymarine e7D and the Garmin 740s have internal sounder modules, and both produce the crisp images of bottom structure and fish targets that we have come to expect from the latest generation in sounder technology. Both units also performed very well in their auto-gain setting.

Sounder menus are intuitive and easily accessed in both units, and the functionality of both is very similar.

The e7D has a number of capabilities not present in the 740s that include the ability to do a “Shift” function that allows a closer view of any part of the water column, and easy access to four user-defined, preset sonar configurations. These included single-frequency, dual-frequency, shallow-water, and deep water. Each of the preset configurations can be edited to rename the configuration setup. For example, preset 1 could be named “Flats.” Preset configurations can also be easily adjusted manually on the fly to accommodate changing conditions. The e7D also allows you to manually adjust transmit power. Testers liked being able to select one of three preset auto-gain settings (cruising/low gain, trolling/medium gain, and fishing/high gain).

By adding an adapter cable (E66066), the e7D supports the expensive 1000 watt (RMS, root mean squared) transducer (for deep water) tilted-element transducers (internally compensated for hull deadrise), in-hull transducers (no drilling required), and some additional stainless-steel options. Even with the 1,000-watt transducer, the output is still 600 watts, but you get the benefit of the more focused beam pattern.

PS testers found both units to be intuitive in menu layout and basic features functionality, but due to the e7D’s increased capabilities, its manual is around 300 pages long, while the 740s’s manual is a mere 100 pages. Both manuals are easy to understand, but the e7D’s additional features such as the FLIR thermal camera touchscreen controls, media streaming, WiFi, and networking aspects increases the systems complexity.

In addition to the touchscreen, the e7D has a UniControl (rotary/joystick/push-button) combination control that is both fast and easy to use. As mentioned in the Inside PS blog in April 2012, this feature allows system cursor control with gloves on, and some may find this easier to use in heavy sea conditions than the touchscreen alone.

The e7D also uses dual-use push buttons. Touching the waypoint button momentarily takes you to the waypoint management page. When pushed and held longer, the same button creates an MOB waypoint. Display icons also change, depending on the context. A moving vessel uses the icon you selected for it, but when the vessel is stationary, and with no heading data, the icon changes to a black circle. This approach is used system wide, and although we liked the concept, the user will have to study the manual to understand these.

Both the 740s and the e7D are ideally sized for binnacle helm mounting, but testers were concerned that both used small, but strong, magnets to hold their chart chip compartment doors closed. Garmin specifies a 32-inch safe compass distance for the 740s, while Raymarine specifies safe compass in six directions with the closest distance being 7.87-inches when the e7D is mounted below the compass; the furthest distance was 27.5 inches (mounted forward of the compass).

Buyers should check compass impact carefully prior to mounting these units. Although the electronics themselves will cause compass deviation, the magnets were the chief offender. Magnets are should be avoided for this application, in our view.

This was not exactly an apple-to-apples comparison, but we felt there needed to be a basic functionality comparison for the e7D, and the Garmin 740s was the best option currently available for testing. PS liked both of these units. They are compact, and both performed basic navigation and sounder functions well.

The bottom line is whether you want the added capabilities the e7D offers such as additional MFD networking and the WiFi and Bluetooth interfaces. If you just need a single-station system with radar, we would judge the Garmin 740s the better buy. If you need more than a single station, then the e7D is the obvious choice. If you can’t live without interfacing your mobile devices, then the e7D is for you. Budget oriented sailors who just want a chartplotter-sounder should consider the Lowrance Elite 5, while serious fishermen who want side-scanning capabilities will want to check out the Humminbird 798ci HD SI; both of these were described in more detail in our November and December 2011 issues.