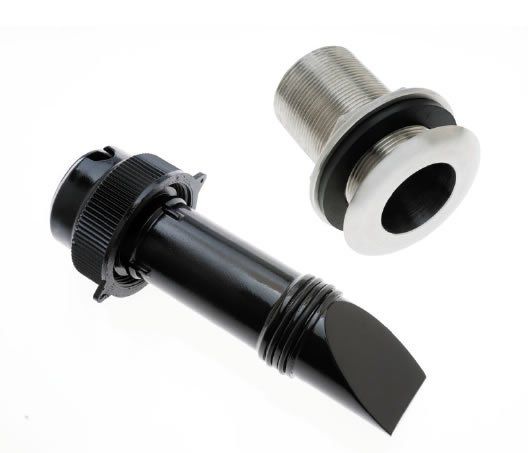 Most depthfinders are historical instruments. They collect and display information from the recent past-not the best arrangement for the sailor. By the time the sounder indicates a shoal, its already beneath you. But this is changing rapidly.

Technology that lets us see the water depth in front of us is now becoming both more user-friendly and more affordable. PS testers recently had the opportunity to test two new forward-looking sonar (FLS) technologies: the Simrad ForwardScan (discussed here) and the recently introduced Garmin Panoptix system, which uses Mill Cross arrays that can electronically steer the sonar beam to sweep the forward area and can even create 3D images. We will be reporting on the Panoptix technology in a future issue.

In the field of forward-looking sonar, Simrad and Garmin are the most familiar names to sailors, but there are other contenders. One of the oldest builders of these systems, Echopilot, offers a twin-transducer, 3D, forward-looking system along with smaller, free-standing units. Farsounder, founded in 2001, also has a high-performance, forward-looking sonar suitable for larger yachts and commercial vessels.

Almost all new sonar systems will let you record and save your sonar data for later playback and analysis. This includes the ability to mark a spot of interest and save the waypoint information. A sophisticated user can take advantage of this feature to create high-resolution bathymetry charts with contour line resolutions as small as one foot. Navionics has an app that does this. The app is compatible with a range of depthsounders made by Humminbird, Lowrance, B&G, Simrad, Garmin, and Raymarine. Garmin released its own multifunction display-based version called Quick Draw in January. Maxsea and other navigation programs offer similar software for PC users. PS will be taking an in-depth look at all of this technology this year.

FLS technology is not new, but earlier versions such as the Interphase system (see PS April 2008 online) displayed bottom images that were often challenging to interpret. It took practice to discern what the myriad scattered dots on the display were truly representing-fish, rocks, something else? The Simrad system cleverly removes this ambiguity. Although users still have the option of seeing the raw data-the dots, so to speak-we can also view a computer-generated rendering of the raw data that presents an easy-to-interpret profile of the sea bottom in front of the boat.

The Simrad ForwardScan is compatible with Simrads NSS evo2, NSO evo2, or B&Gs Zeus Touch2 multifunction displays (MFDs) and plugs into their integrated Sonar Hub module. The transducer, which also includes a temperature sensor, operates at the 180-kilohertz frequency, which eliminates cross-talk with most other transducers. This means we can use it simultaneously with an existing depthsounder without worrying about interference. A complete Simrad system starts at about $2,000, with the following breakdown: $1,100 for display (7-inch evo2), $600 for Sonar Hub, and $800 for the transducer.

The forward-looking range is variable, but due to the physics of the technology, its at best eight times the water depth. As an example, in 20 feet of water in optimum conditions, the system can see 160 feet. In 8 feet of water, it sees forward only 64 feet-about two boat lengths, or less, depending on the boat. The maximum forward view range is around 300 feet. Simrads specifications indicate that in nominal conditions, the forward range is four to five times the depth.

The system uses a vertical array of transducer elements that looks down and forward with a port-to-starboard beam width of 15 degrees. In our 20-foot depth example, the beam width is 42 feet at the theoretical forward distance of 160 feet. At the maximum range of 300 feet, the beam width is nearly 80 feet.

Given the limited forward range of this technology, we would operate at much slower speeds when using forward sonar to find our way up a difficult channel or through coral heads into a secluded cove. This is not such a big deal for a sailboat, which already operates at relatively slow speed. To put it in perspective, at 10 knots, you will travel the maximum range of 300 feet in just 18 seconds. Eighteen seconds doesn’t give the skipper a lot of time to react, much less come to a full stop. At 3 knots, you would have a minute, enough time to stop the boat.

We evaluated a ForwardScan transducer that was mounted on a Beneteau 55 and connected to a B&G Zeus2 glass helm, 12-inch (nominal) multifunction display located at the helm. Testing took place in the Florida Keys. We used the sonar for pass approaches, near shoaled areas, and in confined channels at speeds varying from near idle to 9 knots.

The Simrad ForwardScan transducer uses a 2-inch, stainless-steel Airmar housing and is installed like most transducers. It has a fairing block that will accommodate dead-rise angles up to 20 degrees. However, a fairing block is unnecessary if the hull is relatively level in the area forward of the keel. It can also be installed on the hull sides forward of amidships, so long as the sonar has a clear view forward. Simrads software can make a transducer correction of up to +/-15 degrees out of vertical plane, easing installation requirements.

Like other Airmar transducers that use the same housing, the Simrad transducer insert has O-ring gaskets, and the housing has a valve to facilitate removing the transducer and inserting a blanking plug while in the water. The transducer has a 30-foot cable that will need to be routed to the multifunction-function display.

The MFD setup procedure requires the user to enter several values. The first pair of values are critical: forward range and minimum water depth. The second pair is the forward range and depth warning parameters. These values are dependent on your anticipated travel speeds and transducer location when using the system. It is during this phase of the setup procedure that you can adjust the vertical alignment of the transducer, if required.

The Simrad ForwardScan system has several page configurations controlled by menu options. Users can view the bottom solely as it is interpreted by the sonar software or can display the interpreted view with the raw data (the dots) overlayed on it. The latter view is the one testers preferred.

There are a few other ways to adjust what and how data is displayed. Users can select the amount of previous sonar history that remains visible (to track bottom trends or anomalies). Users can also determine whether they want the warning zones to appear on the screen, or want to show a birds eye view of the chart, with an image of the vessel showing its position. Ahead of the boat is a colored cone indicating depths by color-green for safe, yellow for caution, and red for danger (see photos). Ideally, the boat should be upright when scanning forward, otherwise the bottom image will be skewed.

You can adjust the depth range automatically or manually. Testers found that the automatic functions worked so well, there was no need to set the depth manually. There are no classic gain-adjustments that you typically find on sonars, but there is a menu-driven interference filter to help remove screen noise if required.

Throughout the duration of our test, the system was very responsive, and the display had no problem keeping up with vessel movement. Water conditions were close to optimal for using this type of equipment. The water was both clear and relativity calm, so the system was running near or at its maximum 300-foot range. We did not get the chance to see how the system would operate in rougher conditions, but we plan to do so in further testing in the future.

No matter the conditions, users should be careful to match the boats speed to the sonars range and the water conditions. If the forward-looking sonar is to be of any use, the skipper should be capable of coming to a full stop before the end of the preset warning zone. During most of the test, we were maneuvering at around 3 or 4 knots. Testers could clearly see a shoal on the sounder, and by turning from port to starboard, the channel center through the shoal area was clearly visible. The system also picked up a large, shallow, rocky spot to the port side of the channel and accurately visualized a seawall as we turned past it into a canal.

Bottom line: PS testers liked this technology. What makes Simrads system so much more practical than previous forward-looking systems is the way the engineers were able to translate sensor data into images that sailors can actually use to avoid obstacles ahead. When used properly, it can be a powerful aid to navigation. We can see it being particularly helpful in poorly charted areas, allowing the off-the-beaten-track sailor to creep into anchorages that see very few visitors. Even in well-charted areas, the forward-looking sonar can alert the navigator of new hazards, or when he has strayed out of the center of thoroughfares like the Intracoastal Waterway. This technology certainly isn’t something that every sailor needs, but for those who are already equipped with a Simrad multifunction display and like the idea of exploring new territory, it is definitely worth considering.

When Interphase Marine launched its forward-scan technology with the SE-200, PS contributor and high-latitude voyager Andy O’Grady was one of the first onboard. O’Grady reported that the SE-200 helped him navigate some tricky channels (see PS April 2008 online), but as the screen grabs from the SE-200 above illustrate (photos 2 and 4), the images were sometimes hard to interpret. By comparison, the new Simrad ForwardScan technology (photos 1 and 3) simplifies interpretation with more user-friendly views of the bottom ahead. The raw data also can be viewed, as can processed images.

1. A split-screen view from the ForwardScan shows the bottom contours ahead (left side) and a bird’s eye view of hazards based on pre-set alarms—red for danger, yellow for caution, green for safe (right side).

2. A split-screen view of the SE-200 offers similar views, but the pixelated presentation is not as definitive or easy to interpret.

3.This split-screen view is similar to the one in Photo 1, but this time, the bird’s eye view is overlayed with a satellite image and is zoomed out.

4. A relatively flat bottom delivers a somewhat scattered return in the overhead view (right) on the SE-200.