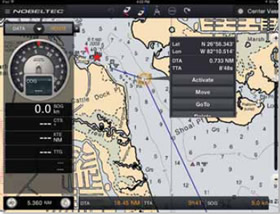 Nobeltec, a marine-navigation software developer based in the U.S., recently released a new chartplotting app for the iPad: Nobeltec TZ (or Time Zero). We took it for a weeklong test cruise and found it to be a good basic nav program with some significant strengths and notable shortcomings.

The Nobeltec TZ apps basic chartplotting functions-displaying real-time position, speed, and course on marine charts, creating routes and waypoints, showing tides and currents, and so on-are as good as the other leading iPad nav apps weve tried (PS, April 2013, March 2012, and February 2012). Nobeltec TZ also does a comparable job of overlaying satellite images on top of marine charts, including a good 3-D view. We rarely use this feature in everyday sailing, but others may find it more useful. The app also offers a convenient way to take photos and screenshots on the iPad and to store and activate them in the nav screens.

Another plus is the apps excellent dashboard, which gives current data when underway such as speed over ground, course, distance to waypoint, etc. It occupies a lot of screen, but it can be hidden when its not in use. The app also does a good job of quilting raster charts. This is especially useful in route planning, for example, when youre laying out a route that covers more than one chart.

As with other apps, charts can be downloaded and stored on the iPad, but with the Nobeltec TZ, they can also be removed, if device memory is a problem. (It rarely is on the iPad, unless you bought the minimum memory and youre heavy into storing movies/videos or 10,000 songs.)

The Nobeltec app has several shortfalls, in our opinion. First, it is not usable on the iPhone, only on the iPad, and theres no Android version for non-Apple tablets.

The program uses raster charts only-and they are expensive ($39.99 for U.S. charts). These are basically the free NOAA raster charts, but you must buy them through the app. Other apps, like iNavX, let you use the free U.S. charts for free. Other Nobeltec charts are also pricey: $49.99 each for Canada, the Caribbean, and most other foreign areas.

A major shortcoming for us was that users cannot name waypoints or routes-a big problem when you have a couple hundred of each. Theres also no ActiveCaptain data for those who are into crowd-sourcing nav information.

Another weakness is that exporting/importing routes and waypoints can only be done through other Nobeltec programs, using the companys proprietary protocol (TZD) rather than the more universal GPX, CSV, or KML formats that most nav programs use. In addition, oddly, you need to use the iTunes program on a PC in order to export or import; its a rather crude process.

And finally, there is no ability to connect to onboard WiFi.

Nobeltec will undoubtedly be updating this new app, as all the other programs tend to do in their first few months, but in its current iteration, it is not among the best iPad nav apps weve tested. However, it will be of interest to sailors who depend on other Nobeltec software on their computers or dedicated chart-plotters.

We still consider iNavX to be the Best Choice iPad navigation app. It would be good if iNavX could quilt the raster charts as well as Nobeltec TZ, but otherwise iNavX is a superior program.

If you want vector charts rather than raster charts, we Recommend Garmin Blue Chart Mobile (www.garmin.com). It has the advantage of including ActiveCaptain (www.activecaptain.com) information. Navionics (www.navionics.com) is a close second.

For the tight-budget sailor, theres Transas iSailor; its the best value. For under $10, users can get the basic navigation app and coastal vector charts for a major U.S. area. Charts for other sizable areas are usually $4.99 each.

Getting Weather Data at Sea