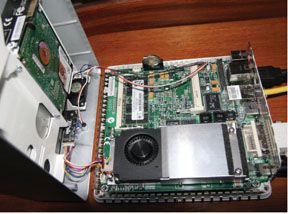 Used to be, that if you wanted an affordable computer on board to handle marine navigation software, a laptop was an obvious choice, primarily because it was small, portable, and power efficient. All that is changing with the introduction of a new generation of small, power-efficient components that can be incorporated into a fairly rugged PC that will fit on an average cruiser.

In this, the first of a three-part series on marine computing, Practical Sailor looks at some of the cutting-edge options for onboard computers. In the next part, well review the most popular navigation software for cruising sailors, and in the third part, well look at the various headaches associated with interfacing your computer with existing marine electronics platforms from Raymarine, Furuno, Simrad, and others.

Faster, better, cheaper is the computer-makers mantra, and the longer you wait, the better your system will be. Right now, dual-core processors are hot, as exemplified by Apples lineup of Intel-based computers. Less well-known, but perhaps more relevant to cruising sailors, is the range of mini-PCs based on the Mini ITX motherboard form factor. Designed primarily for industrial and automotive markets, these compact and efficient units take up very little space and consume less or the same amount of power as an ordinary laptop.

A laptop computer can perfectly suit the needs of the average cruiser, and is very portable. However, for sailors serious about onboard computing, the new compact mini-ITX systems as well as the slightly larger mini-ATX systems, are promising options. PS recent market scan of customized mini-ITX systems reveals that these systems, combined with an LCD monitor are very competitively priced and, as shown on the table on the facing page, offer many advantages that a laptop does not.

The Laptop
Navigation does not require a powerful machine, and unless you are using the advanced features of high-end navigation software packages, todays mid-level laptops-which cost about $1,200-$1,500-are more than adequate. Big hard drives arent that important unless you plan to store a number of raster charts, or you intend to associate many photos with your waypoints-a feature offered by some navigation software. For marine applications, low-power 2.5-inch disks found in laptops can spin relatively slowly (5400 rpm) and still provide acceptable performance. Recently, 160GB drives for laptops became available for a premium ($235 at press time).

Ruggedized laptops are available, but they cost three to five times more than a conventional laptop. And, if you assume your computer will be fairly outdated in four years, for the same money, you can have an updated inexpensive laptop every year.

Powering a laptop on board is usually simple. Dual-mode AC/DC power supplies for laptops-such as those made by Targus-are available. These handy external power supplies allow a laptop to be plugged into a cigarette lighter outlet or A/C power. Modern laptops might draw as little as 4 amps to more than 12 amps on a 12-volt system while running navigation software.

The Custom PC
Desktop CPU enclosures traditionally have been mini-towers, full-sized towers, or some variation. While you can certainly squeeze one of these conventional units onto a big cruising boat, the best choice for a permanent marine installation is a custom computer. Either the mini-ATX or mini-ITX motherboards would be a good starting point for customization. Mini-ATX motherboards are quite small and are designed for low-power applications. The small enclosure can be tucked away somewhere near the nav station with just the CD-ROM drives visible. The even smaller mini-ITX motherboard can be housed in a small cube casing (similar to the Mac Mini), and with careful choice of components the enclosure might not need a fan, or the fan might only run when required.

Both of these systems lend themselves to custom building, and in fact, custom computer builders are about the only places offering them at this time. Custom-built computers can cost about the same as a top-notch laptop, and their individual components are cheaper and easier to service. You can readily purchase 250GB hard drives for less than $100, and 400GB drives are available for less than $200.

Other choices for the average user include Apple Macintosh computers and Linux-based computers. The small, user-friendly Mac Mini is an obvious choice for a marine applications, except that your selection of navigation software is limited. (We are currently testing MacENC by GPSNavX Inc.) Linux-based navigation software exists, but its not really suitable for the mass market.

If youre not using a laptop, youll need a display, and a flat-panel LCD is the obvious choice. You can mount the display at eye level at the nav station or on a pivoting arm. Either way, displays do not take up space on a chart table like laptops do. Microsoft Windows supports multiple monitors, should you have the need and the space for multiple displays. It is common for these ITX-based motherboards to have built-in video output. Some video cards have two outputs, so you could add a video card for a second (and a third) display.

You can run your PC from an inverter, but it is more efficient to run it straight from your 12-volt system. DC power supplies like the Carnetix P1900 that PS found will condition 12-volt power for desktop computers. Even when you take into account power for the requisite LCD screens, these mini computers use no more power than the ordinary laptop. Slower processors will generally consume less power, although new technology is yielding extremely fast, power-efficient modules. Options range from EPIA VIA chips, to high power Intel chips. The EPIA website, www.epiacenter.com, has a link to a power simulator, PowerSimulator v2.17, to calculate the power demands of a custom system.

Youll want lots of USB 2.0 connectors for interfacing. Most marine hardware will now interface with this.

Ruggedized keyboards are readily available, or your favorite keyboard can be covered in a flexible plastic skin for less than $10. Some boats have keyboards mounted in a drawer, on a swinging arm, or set off to one side to be placed on the navigation table when needed.

Although sailboats don’t typically deliver bone-jarring rides, hard drives and CD/DVD drives can be sensitive to vibration. There are a number of hardware and software options for storing and backing up valuable data like waypoints, photographs, or e-mail. USB drives ranging in size from small 256Kb thumb drives to 300GB backup drives are a popular, convenient option. If your computer suffers a catastrophic head crash, the only way to quickly revive your marine computer is to have an identical drive ready to slide into place. This would be an imaged backup drive that would return your computer to exactly the same state at the time of your last backup. Our tester used Future Systems Solution Casper XP v3.0 software ($50, www.fssdev.com) to accomplish this task.

In the not so distant future, you can expect non-volatile memory (like that found in USB flash drives) to replace rotating disks, eliminating the concern of vibration damage. An example of this is Samsungs new 32GB Flash-SSD, designed to replace traditional notebook hard drives. According to the company, its SSD reads and writes data faster than a comparably sized hard drive, and requires 1/20 the power. This type of storage is extremely expensive right now-about $500 for 32GB-but within a few years it will become much cheaper.

Conclusion
If you are a part-time cruiser who only occasionally uses navigation software and cannot justify the expense of a dedicated marine computer, a laptop is probably the easiest type of computer to use, provided that you can keep it dry. Off-the-shelf desktop computers are only viable if you have a lot of space and an abundance of good quality AC power. It is surprisingly easy and inexpensive to have a custom marine computer built to order, and they can be integrated right into your navigation station so they take up a minimum of space and power. Today, the mini-ITX systems look particularly attractive, but we expect they too will be succeeded by faster, more energy-efficient, and cheaper systems. Regardless of which route you take, you should have a backup means of navigating should the system fail.