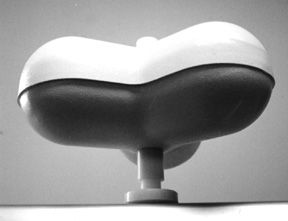 In the September 1995 issue, we reported results of radar reflector testing done at the Stanford Research Institute in Palo Alto, California. This was made possible thanks to Dick Honey, then a semi-retired senior principal scientist at SRI, uncle to former SRI research engineer, well-known navigator and sailor Stan Honey (also the guy who puts the yellow first-down band across the screen of your TV during pro football games). Stan also assisted, as did West Marines Chuck Hawley and a third member of this Bay Area brain trust, Jim Corenman.

Two Types
Marine radar is of two types: X-band and S-band. The former is the type commonly carried aboard small boats. It operates at a frequency of about 9.4 GHz (9400 MHz) and has a wavelength of 3.2 centimeters (cm). S-band radar is used aboard large ships and operates at 3 GHz with a wavelength of 10 cm.

Ship operators generally use their X-band radar near shore because it has better resolution and can pick up smaller targets better than S-band, which is commonly preferred offshore due to its longer range and superior resistance to sea clutter.

Terms
Radar reflectors are described in terms of their Radar Cross Selection (RCS) and their performance is measured in decibels (dB) relative to some reference, usually a 1m2 sphere (profile).

Tri-Lens Radar Reflector
In our 1995 test, a recommended minimum average RCS of 2.5 m2 was adopted at the suggestion of GEC Marconi, maker of the Firdell Blipper reflector.

Radar reflector performance is a direct function of size, proportional to the fourth power of its linear size. Doubling a reflector’s size increases its effective area 16 times. In the 1995 report, we wrote: “As the smallest dimension of a reflector gets down to a few wavelengths of the radar signal, it quits acting as a reflector and starts to act as a lump of metal. Remember that a wavelength is 3.2 cm (1-1/4″) for X-band, and 10 cm (4″) for S-band. So, small reflectors must be looked at with a great deal of suspicion, as there really is no substitute for size.”

Besides strength of return, consistency also is critical. Many radar units are not continually monitored but set to automatically sound an alarm if a target registers three consecutive “hits.” One big hit wont alert the ship’s crew that a smaller vessel is in the vicinity.

Reflectors tested in the 1995 report included the octahedral Davis Echomaster and Emergency; the trihedral and dihedral-based Holland Yacht Equipment, Firdell Blipper, Mobri, High Gain Rotation and Cyclops; and the Luneburg lens-type Lensref. We also tested the Radar Flag, which was practically invisible.

1995 Results
The top-performing reflector six years ago was the Davis Echomaster in the vertex up position with 0 heel, which registered 63% of returns above 2.5 m2. In the double-catch rain position and 20 heel, just 43% of returns were above 2.5 m2.

The Lensref has virtually no nulls; its polar plot is a virtual circle. Had the minimum average RCS been just 2.0 m2, the Lensref would have easily won with 100% of returns greater than the threshold. At 2.5 m2, however, just 30% of the returns exceeded the threshold. And this was at less than 18 heel, over which its performance fell off dramatically. A gimbaled mount was recommended.

The Tri-Lens
Last year, we were contacted by Tim Rozendal of Rozendal Associates in Santee, California, asking us to test his new reflector. Tim said he has supplied more than 20,000 Luneburg lenses to the US Navy, Army, Air Force and Coast Guard. When he became interested in developing a product suitable for the recreational boating industry, he studied our 1995 SRI report and came up with two sizes of the Tri-Lens Radar Reflector. Due to computer problems at SRI, we were unable to have Rozendals Tri-Lens tested in the same anechoic chamber as the others. Instead, we directed Rozendal to Ohio State Universitys Electro Science Laboratory Compact Range. A copy of the 1995 report was supplied to OSU so that the same test protocol could be followed, and a Davis Echomaster was also tested as a control.

The Tri-Lens has a novel configuration of three modified Luneburg lens reflectors oriented about a vertical axis. It was measured only at X-band.

We asked Dick Honey to review the OSU report and interpret the data. In his summation to PS, he said the Tri-Lens shows “the uniform azimuthal response expected of Luneburg lenses, as well as the excellent tilt (heel) response expected from the design, i.e., each lens looks only into its 120 azimuthal sector so that the spherical reflector on the back of each lens can be quite large, with no aperture blocking as occurs with most single Luneburgs designed for 360 coverage. In other words there are very few narrow angular gaps in the coverage between each lens.”

Honey nevertheless had criticism of the Tri-Lens.

“Our reservations,” he wrote, “are not with the angular coverage, but with the magnitude of the reflection. (This same reservation applies to virtually all passive radar reflectors on the market today!) The Rozendal reflectors use 5.25-inch diameter spheres inside a somewhat larger radome, the spheres being approximately 4.2 wavelengths across at X-band, but only 1.4 wavelengths across at S-band. This means that they may not be much better at scattering S-band radar signals back towards the radar than the average winch, and S-band may be the only radar in use on the high seas (if any).

“As mentioned in our earlier test, the radar cross-section (RCS) of similar reflectors increases as the fourth power of the size, so it would take a relatively small increase in the size of the Luneburg lens to bring the X-band RCS up to 10 square meters (m2) the minimum echoing area requirement in the latest International Standard (ISO 8729, Marine radar reflectors, sec. 5.1.1). That is, a perfect Luneburg lens 5.25 inches in diameter should have an RCS of about 2 m2 at X-band, but a lens only 40% larger or 7 inches in diameter should have an RCS of 10 m2. In addition, it would have a 2-wavelength diameter at S-band, where it might begin to reflect better than a winch. Unfortunately, this would add significantly to the weight of a Lens-based reflector, and weight is already a concern with these reflectors, relative to an octahedral reflector like a Davis Echomaster.

“Rozendal also offers a Mini-Lens reflector, which as expected given its small size, cannot compete with any reflector on the market except for the Mobri.

“Wouldnt it be great if a radar reflector could achieve an RCS of at least 10 m2 at X-band over 360 of azimuth with trivial nulls and wide tolerance for heel? Of course, it should be less than a foot in diameter, weigh little, and be ‘almost free,’ as they say in Mexico.”

In response to these criticisms, Rozendal agrees that the Mini Tri-Lens “does not perform well using the 2.5 m2 threshold.” The Mini Tri-Lens, he says, was “intended for small boats and coastal sailing. It should be mounted as high as possible, preferably on top of the mast. The mini Tri-Lens does not have a large RCS but gives a consistent return. It has three narrow dead spots. The Mobri has 16 dead spots and any octahedral will have eight dead spots. A premium must not only be put on RCS but on the consistency of the return as well. Anything that will help improve a vessel’s radar visibility is worthwhile, particularly shorthanded vessels and those without radar.”

The International Standard for Marine Radar Reflectors (ISO 8729) was revised in 1997 and came two years after our 1995 test. In addition to the section 5.1.1 noted above, there are other relevant sections. 5.1.2 requires that a reflector’s azimuthal polar diagram “shall be such that its response over a total of 240 is not less than 2.5 m2. The response shall not remain below this level over any single angle of more than 10.”

And section 5.2 states, “The performance of the reflector up to at least +/- 15 from the horizontal (the degree of heel) shall be such that its response at any inclination remains above .625 m2 over a total angle of 240.”

The standard Tri-Lens measures about 12″ across, is 6″ high, and weighs about 5.5 lbs. It sells for $219 and the Mini version for $129. West Marine now carries them. Price includes a Mast Mount Bracket and a coupler that can be adapted to any marine antenna mount.

While bigger is better when it comes to radar reflectors, there are practical limits aboard small boats. Installing a radar unit may be a skipper’s best defense against collision at sea-the idea being that the best safeguard is for you to see the other guy rather than hoping he sees you-but not everyone wants or can afford a radar set. And even then, hanging a relatively inexpensive passive reflector certainly doesn’t hurt.

Compared to the high cost of the Lensref (about $425), the Tri-Lens is a bargain. It costs more than the Davis Echomaster ($60), but outperforms it. If you’re in the market for a passive radar reflector, we recommend the Tri-Lens (www.tri-lens.com).

Also With This Article
Click here to view “Ranking of Reflectors.”