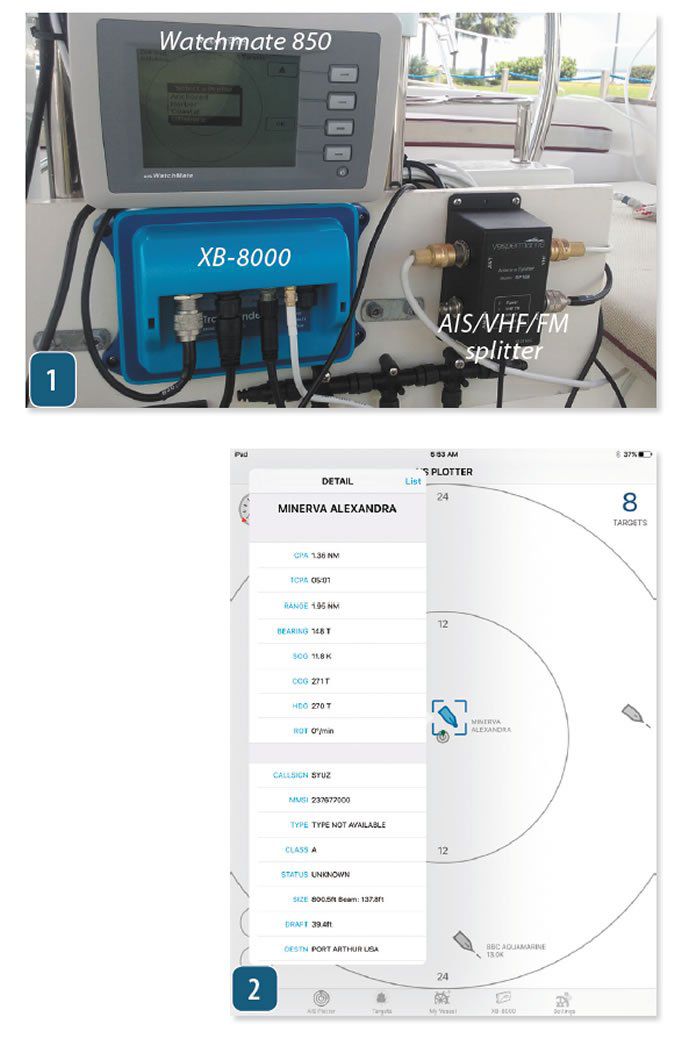 During a recent passage from Sarasota, Fla., to Havana, Cuba, Practical Sailor had the chance to compare the new Vesper XB-8000 Class B AIS transponder with its predecessor, the Vesper Watchmate 850, a stand-alone Class B AIS transceiver that earned our Best Choice pick back in 2013. (See Comparing Class B AIS Transceivers, PS September 2013 online.)

Although both come from the same New Zealand-based manufacturer, the Watchmate 850 and the XB-8000 occupy different niches. The Watchmate 850 incorporates a low-power LCD display that will appeal to the keep-it-simple sailor who leans toward the redundancy of a stand-alone AIS system. The XB-8000 is a black box (no display) that combines an AIS transponder, an NMEA 2000 gateway, and a WiFi router. This enables it to send and receive AIS data, interface with the ships existing NMEA 2000 instruments and displays, and then wirelessly share GPS position, AIS target data, and other key instrument data like depth and speed with up to five different Android and iOS devices. It also integrates NMEA 0183 devices via the NMEA 0183 output, the USB port, and WiFi.

For those who have not yet been initiated into the world of AIS, this is the Readers Digest version. You can find much more information, including PS-test results on other devices, by searching AIS on www.practical-sailor.com.

Under U.S. law and international treaty, most commercial vessels must carry an AIS transponder. The transponders help paint a visual, radar-like overview of ship traffic by transmitting (and receiving) digital information including speed, course, and position via VHF marine frequencies. The name, call sign, and Mobile Maritime Service Identity (MMSI) number of nearby, AIS-equipped ships are also shared, and the system allows users to quickly contact nearby vessels via VHF using digital selective calling (DSC). Class B transponders like the XB-8000 and the Watchmate 850 are designed for recreational craft, which are not required to have AIS. Class B transponders transmit at 2 watts, a much lower power than the 12.5-watt Class A transponder required for commercial ships.

AIS transponders are a key component in the Global Marine Distress Safety System. Similar to an Emergency Position Indicating Beacon (EPIRB), AIS transponders can transmit distress signals with a boats position and other vital information. They can also detect and track the latest generation of AIS-based man-overboard beacons like those we reviewed in the May 2013 issue. (See Field Testing Kannad, McMurdo, and Mobilarm MOB Beacons, PS May 2013 online.) Both Vesper units weve reviewed also have an anchor watch and MOB alarm feature.

The XB-8000 came pre-programmed for our test boat, and setup was no more difficult than that of the Watchmate 850. For testing both units, we used a Shakespeare 396-1-AIS (3dB) antenna mounted on a pole at the stern (12 feet above sea level at the base). Vesper also sells its own antenna, as well as a splitter that allows you to use the ships mast-mounted VHF antenna, which can offer greater range. During the passage, we received targets from as far as 24 miles, and we confirmed that AIS-equipped vessels could see our boat up to 7 miles away (about the maximum range you can expect with 2 watts of output).

The hazard of assuming your own boats visibility was made crystal clear when we picked up the container ship Yorktown Express about 15 miles away. Although the skipper clearly received our voice signal, our AIS signal did not pop up until he was 6 miles away-or about 15 minutes from collision. The XB-8000s integration with both iOS and Android devices was trouble free, and the touchscreen interface made it easy to zoom in and isolate targets.

In terms of performing essential functions, the Watchmate 850 proved just as capable as the XB-8000, and if you want more flexibility, it can be interfaced with computers running various navigation software programs and with your boats NMEA 0183 devices, such as a chartplotter. However, the slick interface of the XB-8000, the built-in WiFi capability, and the NMEA 2000 compatibility are enticing. At one point, the crew was monitoring more than a dozen ships on three different devices using the XB-8000.

Bottom line: The XB-8000 is robustly designed, easy to install, compatible with a range of devices, and extremely versatile. It offers a number of features not found in other AIS black boxes. Although you can use this system solely in conjunction with a smart phone or tablet, we recommend that any AIS device either be fully autonomous like the Watchmate 850 or linked to a network that meets minimum marine standards such as NMEA 2000 or NMEA 0183. If you want something that does both, Vespers full-color Watchmate Vision AIS works as a stand-alone and it can integrate with NMEA 2000 and WiFi devices like the XB-8000. Look for a report on the Watchmate Vision and others in an upcoming AIS update.