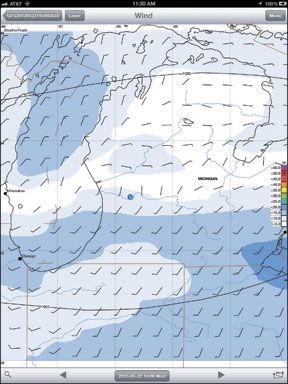 A number of sailors use GRIB files to create their own short-term weather forecasts. In our original report on iPad applications for sailors (PS, April 2012), we noted three apps for using GRIB weather files: the simple PocketGrib and iGrib, and the more sophisticated WeatherTrack. Now theres another, even more sophisticated GRIB iPad app: Weather4D.

If youre new to GRIB, the term is just an acronym for Gridded Information in Binary format, which is the standardized weather data produced by government agencies, such as the National Oceanic and Atmospheric Administration (NOAA). The GRIB data are not weather forecasts in themselves but rather the basic data meteorologists use for virtually all weather forecasting. For a good, basic introduction to GRIB, check out Frank Singletons website, www.weather.mail asail.com/Franks-Weather/Home.

The iPad GRIB apps-as well as programs built into such navigating apps as iNavX or OpenCPN-simply retrieve the weather data and convert it to formats that can be read as forecasts and overlaid on maps or charts. The primary data used for the boating apps are wind direction, wind speed, wave height, rain, and air temperature; a lot of other data such as isobars, pressure, currents, and ozone concentration, are also available but rarely used in the sailing programs. You can get data for specific areas for three-, six-, or 12-hour intervals, generally up to eight to 12 days in the future. To get updated data, you need Internet access of some sort-the sophisticated GRIB apps include the ability to connect via SSB or Iridium satellite in addition to the usual email or web-browser connections.

The more simple programs offer rather crude maps displaying wind and weather information, while the more sophisticated programs provide more detailed maps and are more customizable, letting users choose the area and the specific data they want displayed; they also offer trip planning tools like weather routing. In our 2012 iPad app report, we noted that WeatherTrack might be overkill for most sailors. Weather4D is in the same class, but for the diehard weather addict or the offshore cruiser, both apps are practical and useful. For the novice, the learning curve will be steep.

What We Found
WeatherTrack and Weather4D are very comparable, and someone wanting a sophisticated GRIB viewer would do well to spend a half-hour on the companies websites and watching related YouTube video tutorials before deciding which one best suits their needs.

In general, we would say that WeatherTrack offers a bit more data while Weather4D offers better displays. The 4D refers to the fourth dimension-time-and Weather4D offers better animated forecasts as well as overlaid information for a number of data types (wind, waves, temperature, cloud-cover, and so on). Both apps were created by sailors: Jens-Uwe Mager developed WeatherTrack, and Olivier Bouyssou launched Weather4D. Note that WeatherTracks English is much better than that of Weather4D, which often uses confusing wording and grammar in the translation from its original French.

One major difference between the apps is their price, but it should be noted that new app prices are pretty fluid as they are developed and upgraded. For example, at the time of our original story, in early 2012, WeatherTrack cost $20. Today, its price is $8, however, there are additional charges for in-app purchases such as routing weather ($4). Weather4D is available in two versions: The basic app can be downloaded for $11, and the full-featured app (Weather4D Pro) is $34. Most sailors will want the Pro version. That doesn’t mean the Pro version is worth four times the cost of WeatherTrack-its not, in our opinion-but wed be surprised if those prices remain steady. Both apps cost significantly less than satellite weather services like Sirius and XM, but there are websites where GRIB weather files can be downloaded for free or for very little cost. For a roundup of some of these websites, view the online version of this article.

Bottom line: Testers preferred the visuals of Weather4D, and we Recommend the Pro version for our fellow weather-forecasting sailors out there. However, we suspect the more-geeky do-it-yourself weather forecasters would prefer WeatherTrack, our Budget Buy in this comparison. Be sure to check app-store prices before downloading.

Keep in mind that GRIB files are automated and sent without review by any meteorologist; this means theres a higher potential risk that they include errors in the forecasts.