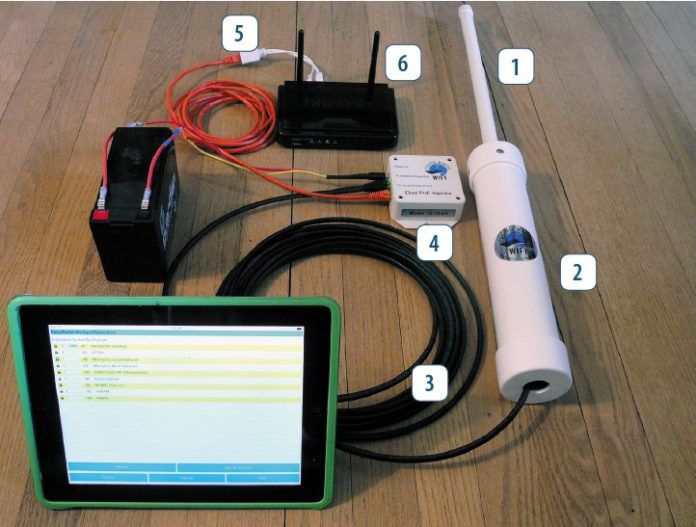 Fast, reliable broadband connectivity is often taken for granted ashore. But once youre out on the water, the digital domain can go downhill fast and access to high-speed, cost-effective digital communications begins to waver. Cellular towers and Wi-Fi hotspots are the inshore sailors next best friend, but since Wi-Fi signals are line-of-sight, the range is limited. How these two important links to Web-based communications-cellular and Wi-Fi- work and what you can expect from the technology in the marine sphere is part of our ongoing electronics update.

In this report, we take a look at Coastal Marine Wi-Fi boosters hotspot-finding capability and what it offers those who spend a lot of time coastal cruising. But before delving into the details, its important to differentiate between the two types of communication needs aboard small craft.

The primary role of marine electronic communication gear revolves around safety and handling emergency communications traffic. And when it comes time to call for help, the preferred process is to use Digital Selective Calling VHF, single-sideband radio, or a designated satellite communication frequency. When trouble on the water intrudes, its time to reach for the VHF mic, not the cell phone. In order to best communicate with the U.S. Coast Guard and other first responders, VHF radio communication remains the first, and best, choice.

The big decision for some cruisers is whether to opt for the anchorage with the best holding or the one with the best Wi-Fi signal or open hotspot. If theres a gale in the forecast, good holding ground and ample protection trumps a chance to surf the Web. But the quest to remain connected is a priority for many cruisers. And after some recent testing, weve found that, when it comes to hauling in the hotspots, Coastal Marine Wi-Fi can extend ones reach.

Coastal Marines technology, like that of others weve tested (see PS, April 2015), is based on enhancing your boats line-of-sight view. The way it works is akin to Jack Tar climbing to the crows nest with a telescope to get a good look at things he would never have seen at deck level using the unaided eye.

The Coastal Marine Wi-Fi relies on an elevated antenna with increased gain and an ability to amplify the signal. The unit combines an 8-decibel Wi-Fi antenna linked via a Power over Ethernet (PoE) cable, which is more efficient than coax cable. The antenna is connected to a maximum-output (600-milliwatt) Wi-Fi transceiver. The plug-and play hardware includes a Wi-Fi access point (router), power-over-Ethernet (PoE) injector, waterproof/UV resistant Ethernet cable (and a standard cable), a passive or active splitter, plus a plug-to-pigtail connector. The devices app (Android, iOS, or Windows) greatly simplifies connecting to hotspots and keeping track of signal strength.

The purchase price for the package ($460) is a bit steep, but when compared to the monthly rates for a 4G LTE cellular network plan-about $50 per month-it seems reasonable.

We easily connected the components following the straightforward, simple directions. In just a few minutes, we downloaded the Coastal Marine app to our iPad. And as soon as we flipped the switch, the Coastal Marine Wi-Fi began receiving signals from an avalanche of Wi-Fi sources, some well over a mile away. Most were password protected, but there were also many open hotspots, and we usually found several dedicated for public use. The selectivity, higher power, antenna elevation, and higher-gain antenna helped to give the Coastal Marine WiFi unit greater range than smartphones and tablets when connecting to a Wi-Fi hotspot. (Cellular connection is a different story.)

One of the most noticeable advantages of the system is how it increases the reception range of most marina hotspots and how it also increases your ability to latch on to free restaurant, library, supermarket, and other Internet access points. We occasionally acquired usable signals from as far as two miles away.

Free hotspots are growing more common, and being able to cast your digital net a bit further is worthwhile, especially since these links deliver reliable, high data-rate connectivity. One of our testers is a shore-side Comcast subscriber, and he was able to tap into Xfinity hotspots, which are rapidly proliferating throughout the east.

In our testing, we found that the systems effectiveness correlated with the height of the installation. Sailors will find that the radio/antenna (sealed in PVC) is too bulky to permanently mount in the rigging. So testers compromise was to set up a temporary mount at the first set of spreaders (about 20 feet above the water). The folding mast steps that span that portion of the spar make the setup and retrieval quite simple.

For comparative purposes, we took along an AT&T Unite 4G LTE cellular hotspot on our test run. Verizons Jetpack 4G, T-Mobile 4G Mobile, and other hotspot devices function in a similar fashion. All of these handy portables provide users with a cellular Internet link, acting as a mini wireless hotspot. The Unites rechargeable, lithium-ion battery provides up to 10 hours of cellular wireless connectivity and access to the Internet. This approach is convenient but costly if you need lots of data handling. In addition to the unit purchase price and in some case an activation fee, there are monthly rates based on how much data is handled. A typical plan can cost $50 per month for 5 gigabytes (GB) of data. Anything beyond that costs $10 per gigabyte.

A smartphone hotspot combo is also a viable alternative. But the small antenna and low power of such technology limits the effective range, especially on the water. We found that the strong signal and efficient antenna of the Coastal Marine Wi-Fi made it a more reliable link to external hotspots, many not even showing up on our smartphone and tablet when we used their internal antennas. However, we found it much easier to find a reliable cellular link using our AT&T mobile hotspot.

Its important to also recognize the security issues with unknown site connectivity, and it makes sense to resist passing along vital personal information or doing financial transactions on unknown hotspots.

Bottom line: Coastal Marine Wi-Fi delivers the extended reach they describe in their literature and those spending lots of time on board, moored or anchored near civilization, will have a better chance of staying connected.

Hotspot Hunt from the Sea

Setting up the Coastal Marine Wi-Fi and putting it to work seeking hotspots was straightforward. Range varies with the height of the antenna and the strength of the shore signal. We occasionally acquired usable Wi-Fi signals from as far away as two miles away.

1. The powered Power over Ethernet (PoE) splitter accepts both the Ethernet cable from the antenna and the cable that links to the local Wi-Fi access point, or router.

2. Four LAN ports on the Trendnet router made it easy to connect with onboard computers and devices.

3. Warnings of weak signals simplify the search for hotspots.

4. Many Wi-Fi connections are password protected, but public hotspots are becoming more available in populated areas, especially along the U.S. East Coast.