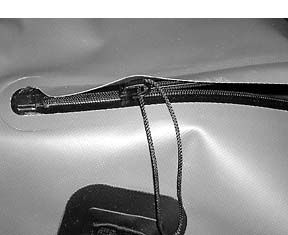 Foul weather, spray-filled dinghy rides, soggy conditions belowdecks, the easy topple from deck or dock-all these situations can be made less worrisome by knowing that your clothes and towels, your important papers, your loose electronics, and maybe even your lunch are stowed in a bag that will keep out the water, or at least deny it access for a reasonable amount of time.

Over the winter we teamed up with our colleague publication, Powerboat Reports, in a quest for a true dry bag. We brought in a big group of contenders and put them through some tough paces. Some took it better than others. Heres what we found.

What We Tested
We started our research by scanning the three major boating catalogues, West Marine, BoatU.S. and Defender Industries, where we read about bags claimed to be Dry as the Desert, Tough as Steel and Bulletproof. We ordered those, and also bought some bags marketed for canoeing, kayaking and whitewater rafting. Some claimed to be submersible and capable of being used as flotation.

In all, we rounded up 26 bags and pouches from seven different manufacturers-Gill, Cascade Designs (SealLine), Watershed, P.I. Outdoors (Gaia), Zero-Limits, and Seattle Sports (the last makes some of the West Marine bags).

The bodies of most of these bags consist of vinyl or nylon (one bag had Kevlar in it). Clips and fasteners are plastic (no stainless steel). Most bags used one or a combination of the following three closure systems: zipper (plastic and metal), fold-and-clip, and Ziploc-type seals.

How We Tested
We put the bags through three tests.

1) Spray Test: With dry paper towels in each, we laid out the bags on the ground and sprayed a light mist of water with a garden hose for 15 minutes. We did not apply a direct stream at the bags because we wanted to duplicate a rain shower, not a flood.

2) Sit-in-Water Test: We borrowed a 76″x56″ childrens pool for this exercise. We placed the bags in 1-1/2″ of water overnight. Our rationale: We figured that these bags might be left on a wet deck or in a wet locker. Paper towels were also placed in the bags.

3) Weight Test: We wanted to find out how these bags would hold up under stress-for instance, being pulled out of the water while heavily loaded. This, we thought, would mimic the classic case of a bag falling off a dock or the deck of a boat and being manhandled roughly back to safety. So we put 75 pounds of bricks in them. We then used the bags’ straps or handles to bounce them up and down. This allowed us to rate the quality of their fabric, stitching, and strap clips. For smaller bags, we used less weight (see table below).

We also operated the zippers, clips, Velcro-type and other seals to rate their ease of use and, of course, took into account their prices.

What We Found
The test results from the first group of bags from West Marine and Gill-ordered from the marine catalogs- surprised us. While many made waterproof claims, six of eight failed our two water tests-miserably. In the spray test, most allowed water to enter through their zippered closures. And while they were sitting in our pool, water made its way through the material or seams. And there weren’t just a few droplets, but puddles.

Our second group of bags-for canoes, kayaks and rafts-generally lived up to their claims. The materials were truly waterproof and their closures-mostly fold-and-clip or Ziploc-type-kept out water.

In all, five bags failed the weight test-the clips of two failed, and three of the bags ripped.

West Marine
The West Marine Explorer Dry Bag, with its sack-style design and roll- and-clip closure, withstood all tests and is very inexpensive ($19) for its size. The large West Darn Dry bag-claimed to be dry as the desert-was darn wet after our spray test; water seeped through its top zipper despite the multiple Velcrod flaps. And the shoulder strap plastic clip on one end broke. The Wet/Dry bag seemed very strong, but failed both water tests. The Kevlar body of the Sail Cloth Gear Bag may be strong, but its clips broke during the weight test.

Gill
Gill literature says its bags are made of heavy-duty waterproof nylon. That may be so, but all of the bags we tested failed both water tests. Indeed, our bags are not waterproof; they are made with waterproof material, says Gill sales manager Jerry Richards in a phrase worth pondering. But the outside flap of the case we tested was saturated. Richards says the bags we tested were prototypes and that newer versions have rubber linings.

Three of the four Gill bags are heavy-duty, with oversize clips and beefy straps with reinforced handles. And these bags boast many compartments. However, the 1005 Compact Bag ripped where the strap was stitched to the bag body.

Cascade Designs
The Cascade bags passed all tests. (Only two were large enough to fit 75 pounds of bricks inside.) However, we prefer the design and ease of use of their Zip Duffle. Unlike the others, which used fold-and-clip closures, this bag opens with a dry-suit zipper on its top. The fold-and-clip sack bags take longer to open, and their depth forces you to dig around for the items you want.

We like the flap on the Kodiak Sac, which helps prevent water from entering the bag when you open it. Cascade also offers a similar style bag with a plug (which allows you to release excess air during sealing) and a small clear Dry Case with a Ziploc-type closure. We found the closure somewhat difficult to seal.

Watershed
Watersheds Colorado was the biggest bag we tested, ideal for storing beach blankets, towels, clothes, and other big items. Its Ziploc and fold-and-clip closure, which spans the top of the bag, takes some practice. The seal is a little difficult to pull apart (wed go with larger flaps that you can really grab), and you have to go back and make sure its closed properly. Nevertheless, the positive airtight seal makes the bag submersible. The other bag, the Large Pouch, works in the same manner. It, too, passed all tests.

P.I. Outdoors (Gaia)
The Dry Stow 30 Widemouth, with its multiple straps and buckles, is a little complicated to close, and might prove frustrating if you had to get in and out of it repeatedly in the course of a day trip. On the other hand, its well-suited for carrying a lot of weight, with four straps that wrap around the body.

Instructions for proper closure are printed on the bag next to its opening. To properly seal it, one of its rigid lips must be completely tucked under the other. The same goes for the other bag tested, the Small 20, which (like the Watershed) has an air-release valve. The bags passed all tests.

Zero-Limits
We had three failures. The Navigator Mapper, which allows storage of maps and small charts, failed our Sit-in-Water test. The paper in both the large and small compartments was wet. The Aqua-Pro Duffels plastic shoulder strap clip came apart, and the D-ring stitching ripped. The side of the 20 Liter Dry Bag ripped during the weight tests. “We do think it was an extreme test,” says Zero-Limits owner Paul Hodder. “From an engineering standpoint, everything is a compromise. Our bags are light, easily foldable and easy to store; they do stand up to everyday use. I know we have a good product.”

The Cell Dry Suit worked well. A cell phone can be used while it’s enclosed in the case.

Seattle Sports
The Seattle Sports Splash-proof is similar in designto the West Marine Darn Dry Duffel, with a standard zipper shielded by fabric flaps. That may explain why it failed the spray test.

We liked the medium Navigator Roll Duffel; it has tough straps, and its fold-and-clip closure is slightly easier to use than some of the others. The sack-type, fold-and-clip Delta should do the job. One side of it includes a triangle-shaped clear section that allows you to see the bags contents.

The Pod 7 provides splash-proof protection for a cell phone or handheld GPS-one or the other. The other side-padded but not waterproof-could hold a pair of glasses.

Conclusions
For our recommendations, we placed the bags in three groups according to their style and closure: the long, narrow, sack-style duffels, the conventional duffels, and the small pouch-type containers.

Sack duffels: The West Marine Explorer Dry Bag is our Best Buy, simply because for $19 it will hold the most gear and keep it dry under most conditions. If a bag is going to take a beating-or its contents cannot get wet-wed spend the extra $20 and get the rugged, submersible Watershed Large Pouch.

Regular duffels: For a large bag, wed buy the air-tight Colorado Duffel. For a somewhat smaller bag, you can’t beat the SealLine with divers zipper, which we think is the easiest to use. Honorable Mention goes to the $64 Seattle Sports Navigator Roll Duffel, which does its duty and is less expensive. We wouldnt leave the Gills on a wet cockpit sole or out in the rain. But their large size, easy access and multiple compartments make them attractive for larger boats with enclosed cabins.

Small containers: Between the similarly priced SealLine and Pod 7 (both about $20), wed take the former because you can store several gadgets as opposed to only one or two in the Pod. In addition, the SealLine is clear, so you can see the items.

Also With This Article
Click here to view the Boat Bag Value Guide.