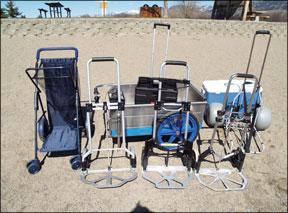 The three hand trucks&emdash;Roleez Folding-Wheel, Sea Bowld, and Dock Dolly&emdash;were nearly identical, with telescoping handles and flip-up bases. The four others&emdash;the Roleez Sports Caddy, Pack N Roll, Wonder Wheeler, and the Foldit&emdash;ran the gamut from a very compact, crate-style cart (Pack N Roll) to the large, workhorse Foldit dock cart. Testers considered each rolling carts performance on and off the dock. They also loaded onto the carts items that are often carried to and from the boat&emdash;a 12-volt battery, cooler filled with food, and a duffel bag of clothes. Testers also noted how easily each was stowed and how much room it took up.

Many marinas and most yacht clubs provide a fleet of dock carts for members to transport coolers, clothing and gear from their cars to their boats. The common type has big spoke wheels, three sides, and sufficient capacity for even a kid to hitch a ride down the dock. But say the above scenario doesn’t describe your berthing arrangement, or you find it useful to pack a compact cart onboard, perhaps for carrying groceries and ice to the boat while cruising distant harbors. What should you buy?

To help answer the question, we procured seven folding, wheeled dollies or hand trucks, plus the top folding cart, the Foldit, from our May 1, 2000 evaluation. Theres some variety in design, focusing on targeted functions, like fat wheels for pushing across beach sand, and net bags for holding loose items. Well point these out as we describe each product. Three of the hand trucks are very similar, so well start with those, then move on to the other three very different trucks, and lastly the Foldit cart.

To test, we loaded each with the items most commonly carried from car to boat: a cooler full of food and drinks, a duffle packed with clothes, and a 12-volt battery (OK, the latter may not be commonly transported, but when you do need to move one, a cart or truck is almost essential).

This hand truck is very similar to the next two: the Sea Bowld and Dock Dolly. Its easy to imagine they were manufactured in the same factory in China, with just enough differences to throw you off. The aluminum platforms, with non-skid bumps, are configured slightly differently. The Roleez is supplied with bungee/shock cords to secure loads to the aluminum frame. Its nicely made and a few pounds heavier than the other two. No assembly is required. Just pull out the airless black rubber wheels, which are folded inward, or push down the platform with your foot (the wheels and platform are integrated to move together). Then depress the “top control cross wire” (actually its more of a metal rod) and pull up the handle so it extends to its full length. Off you go.

Sea BowldPackaging says, “Designed for deck and dock.” Like the Roleez and Dock Dolly, the platform and frame are aluminum. Also like the others, the wheels fold out in concert with the platform going down(http://www.boatersworld.com/). Unlike the other two, two red plastic cams lock the extendable handle in the down position, so it won't inadvertently pop up when being carried in the folded position. A central black plastic clip locks the handle in the up position. Two bungee cords are pre-strung for securing cargo. The wheels are “Non-marring EVA tires.” They measure 6 inches.

Its pretty obvious this hand truck was made by the same company as the Sea Bowld, though there are differences in construction. Whats similar: the packaging, basic design with folding non-slip platform and fold-out “non-marring EVA” wheels, handle lock in up position, and instructions. Whats different: no bungees, no handle lock in down position, and slightly larger wheels (7 inches)(http://www.westmarine.com/).

Now for the specialty hand trucks. The Roleez Sports Caddy (http://www.wheeleez.com/)has an epoxy powder-coated steel tubular frame with telescoping handle and fold-down platform. The platform is not aluminum plate, but is mild steel, a disadvantage in our opinion. Its not as wide as the above three hand trucks, but plenty wide enough to balance a cooler or battery. What makes this truck unusual is its large inflatable polyurethane balloon wheels, which are superior to skinny wheels/tires on beach sand or snow. These doughboy wheels measure nearly 12 inches in diameter and 7 inches wide. Literature boasts theyll also cruise over “rocks, curbs, stairs, and bumps; over grass, and on other environmentally sensitive areas,” whatever those are. And they do. We tried the Sports Caddy on a variety of terrain, including beach sand.

Assembly is fairly simple: remove the elastic netting that holds the wheels to the frame, free the axle from plastic cable ties, insert the axle into the frame and push on the wheels. Open the handle brake, pull out the handle to its full extension or to desired length, and clamp the brake back down. Use the bungee/shock cord and any of the four nylon webbing straps to secure your load. The big wheels hardly make for compact storage.

This suitcase-size dolly has what looks like a black plastic milk crate for a platform. Its wheels are small at 3 inches. The extendable handle is released by depressing a button on the end of the handle, like most small wheeled carry-on suitcases. Unsnap the two sides, shake open, and the hinged floor falls down to secure the square cargo box. Theres a separate, optional ($6) lid which we suspect will be used only in the event of rain…and when all contents fit inside the box. This is definitely the most compact of all the carts. Transporting a cooler requires balanced it on top of the 13-inch-tall crate, though a battery easily fits inside it. The Pack N Roll (http://www.completek-12.com/) is the least robust of the carts tested: The handle wiggles and the wheels are small. Its advertised on television and on the Internet.

Styled as a beach buggy, the Wonder Wheeler (http://www.wonderwheeler.com/)opens easily and locks in position. A red plastic piece locks it in the folded position so it doesn’t pop open accidentally. The front wheels snap on by depressing a plastic tab that looks a little fragile. The rear wheels push onto the stainless steel axle and are secured by a spring clip. The plastic wheels are 10 inches, and therefore better for beach sand than the trucks with smaller ones.

]It looks like a baby carriage but a warning label expressly states that it is not. This misconception occurs because of the soft “seat” and the mesh cargo bag. The packaging shows a photo of the Wonder Wheeler loaded with four beach chairs, a cooler, beach ball, towels and other stuff. Other uses are touted for laundry, gardening, firewood, and trash. No cargo capacity is listed, only this encouragement: “Load it to the Max.”

We can see many uses for this cart around the home, such as transporting groceries in bags, but its not adept at carrying a large cooler. The canvas platform seems weak to support a battery over any bumps, and its loose nature makes it difficult to secure a heavy load. And since most people carry clothing or equipment in duffles or canvas bags, the upper mesh bag for loose items seems less convenient than it might otherwise appear.

The all-aluminum construction Foldit (http://www.norwaycarryall.com/)goes together quickly. All you have to do is remove the bolt and washers from the two axles, using the triangular screwdriver provided, smear some grease (also provided) on the outside of each axle and on the plastic bushings in each wheel, slip on each wheel, and refasten the bolts and washers. It takes maybe five minutes. Before you can unfold the cart you have to extend the tubular handle. It took a minute to realize that theres a push-button on the sides of the handle tubes that must be depressed to release the handle from the rolled cart sides. Once the handle has been pulled out, the cart folds out and locks. Insert the tailgate and youre good to go.

The large size of this cart compared to the hand trucks makes it easier to transport a lot of supplies or equipment, but the downside is the larger stowage package. Whether or not thats a problem depends on the size of your boat and available lockers.

Its manufactured by Tipke Manufacturing and sold through dealers, such as Norway, listed in the Contacts box.

As noted, the three similar hand trucks&emdash;Sea Bowld, Dock Dolly, and the Roleez Folding Wheel&emdash;compare favorably in terms of construction and design. But once you look at price, the Dock Dolly, as sold by West Marine, drops out of the running. At $110, its more than twice the price of the others. Between the Roleez and Sea Bowld, we give the slightest of nods to the Roleez for its simpler operation (depressing the bar is easier than locking and unlocking the two red plastic cams). And you save a buck!

If you like to run your dinghy up on the beach and then hike half a mile to the party, The Roleez Sports Caddy is for you; otherwise, forget it. Its big balloon tires make it too clumsy to carry on board, and the $169 price tag is way above the others.

The Pack N Roll is appealing for two reasons: it collapses to a super small size akin to a portable tool kit, laptop, or briefcase; and its dirt cheap. Theyre available in several sizes and are sometimes seen advertised on TV for less than $20, so its out Budget Buy. On the other hand, theyre not as well made as the other hand trucks, and we didn't find the milk crate-like box as convenient for transporting large items.

The Wonder Wheeler web site extols its versatility, showing it loaded down with beach chairs, a 48-can cooler shoved in lengthwise, and beach towels and lotion and stuff filling the mesh bag. The wheels are on the small side, but again, the beach wasnt our main interest here. Just the dock, maam.

The Foldit stands alone as the only true cart in this report, and we like carts. It doesn’t seem fair to compare it to the hand trucks; its bigger, heavier, and much more expensive: $230.

In the end, for dock use and stowage on the boat, we think wed get the most for our money with the Roleez Folding cart or the very comparable Sea Bowld.