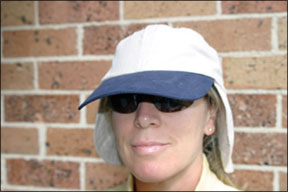 When it comes to onboard apparel, the good old baseball-style hat is often the Rodney Dangerfield of sailing gear: It gets no respect. Many sailors think nothing of forking over a hundred dollars or more (sometimes much more) for a foul-weather jacket theyll use a couple of times a season, but put little thought-or cash-toward something they wear every time they step aboard.

Yes, the baseball hat is ubiquitous and prone to serious abuse, and its maddening when a well-worn version goes missing or is blown overboard, which for some of us, is not an infrequent occurrence. So its no surprise that many sailors would never consider researching or buying a baseball hat, and remain more than happy to utilize the one thats handed to them at a regatta or from a sailmaker.

That, we contend, is shortsighted. A good, well-made, properly fitting baseball hat does many things well: It provides a modicum of warmth on a cool day and welcome shade and relief on a hot one; its overhanging brim enhances visibility, and therefore safety, when the sun is high or low, or its pouring buckets. For some of us, it keeps our hair out of our eyes; and most importantly, for everyone, it can be an effective shield against the devastating effects of powerful solar rays.

When considered in those terms, its hard to dismiss the fact that a hat can and should be an important element in every sailors sea bag.

With all that in mind, for the last several months Practical Sailor has been gathering, inspecting and field testing nearly two dozen hats from a variety of sources ranging from dedicated marine manufacturers to, well, baseball clubs. Though weve “tested” the hats where appropriate, what weve mostly done is wear them, in good weather and bad, on hot days and cold ones, in big winds and mild zephyrs, and in forays along the docks. The last item, we felt, was important, for if you walk around in a hat that makes people laugh at you, you probably won't wear it. At least we won't. Ever again.

When all was said and done, we chose the 11 most useful, innovative or unusual caps, which we evaluate here. Note: Weve broken the list into two groups, one for conventional “All-American” hats, and the other for what weve referred to as “Aussie-Style” caps, those with an integrated neck flap for increased sun protection. Though our list is by no means exhaustive-we could spend the remainder of our days examining the countless ball caps on the market-for sailors purposes, we feel our collection is a solid representation of the best hats available. If you know of a hat that you feel strongly weve missed, please let us know.

To evaluate the hats performances, testers put them into real world use. Each hat was worn multiple times in varying conditions.

Testers examined each hat for construction quality, weight, fastening systems, and fit. We also washed them each several times to determine whether they had any tendency to shrink and to see how well they survived repeated washings.

To measure how long the hats would take to dry on an average day, each one was submerged, then wrungout, and set out to dry on partially sunny, 72-degree day in the late afternoon. Hats that took more than two hours to dry received failing grades. (Expect drying times to be significantly shorter on sunny days.)

The embroidered Cool-Crown cap is the choice of many competitive racing campaigns for a lot of good reasons: Its 100-percent cotton construction is relatively light and durable, and the internal mesh lining wicks moisture and enhances resistance from sweat stains. Plus, its priced right and is good looking. However, the brass clasp on the adjustable leather band can be extremely uncomfortable after extended wear.

The handsome Dri Tech hat from Henri-Lloyd is constructed of DuPont Tactel, a blend of 60-percent nylon and 40-percent polyester, and it certainly lived up to its name in our drying test, where it was the sole hat to completely dry in less than an hour. Though its not inexpensive, retailing at $31, its probably worth the cost for some sailors, with one caveat: Despite its “one size fits all” label, it most definitely is a cap for those with modest head sizes.

This long-time favorite among racing sailors, with its distinctive gold-embroidered logo against the deep-red fabric, is a classic that only becomes cooler when it starts to fade in the sun. You can’t buy a Mount Gay hat; they are distributed exclusively through the company in sponsorship deals with specific regattas or events, which are also embroidered into the hats crown. Typically, you need to sail the regatta to get the hat. Mount Gay has been known to switch suppliers from time to time, dependent on price and availability, but the 2007 line is vintage: all-cotton, lightweight, and quick drying, with a comfortable, adjustable nylon closure.

The Twill Crew Cap currently is unlisted on the Musto website, but sailors arent missing much. It runs on the smallish side, and compared to other 100-percent cotton options, it is neither light nor quick drying. It does, however, have one feature that would be nice to see on other simple ball caps: a built-in lanyard with clip for affixing to a collar or neckband to prevent the hat from flying away on a windy day.

This cotton hat, made in Ansonia, Conn., is sometimes passed out from marine industry magazines, and it is also the in-house cap available at the Bitter End Yacht Club on Virgin Gorda, British Virgin Islands. Its strong and amply sized, and wears nicely over time. Points were deducted in our ratings because its not easy to buy one on the retail market, but for sailors looking to outfit a crew with special, custom-embroidered hats, the NEC model is highly recommended.

The “official” hat for Major League Baseball is a 100-percent wool affair that is probably the last thing a sailor wants on his head. Its hot, takes forever to dry, is prone to sweat stains, and despite the fact that you purchase it fitted (i.e. to your exact head size), it shrinks over time. Professional baseball players wear a version of the Nike Dri-Fit hat in spring training, and why they haven't switched to lighter, better hats for the dog days of summer-after all, they got rid of the wool uniforms long ago-is a mystery.

Say what you will about Nike, the fact that the company remains popular (and profitable) beyond all reason is elementary: Their products are good. The Dri-Fit hat is another example. Its extremely light and well made, and its embedded mesh panels keep you cool in the heat. The quick-adjust back closure is fairly ingenious and can be eased or tightened with one hand, while youre wearing it. We did think it would dry faster, but thats really its only negative. The hat is readily available online from many sources, including golf suppliers (Tiger Woods, of course, wears one adorned with his own logo), for prices ranging from $15 to $22.

We stumbled across this hat in a surf shop, and though the styling isn’t for everyone, we found it to be good value for sailors. Made of a 63/34-percent blend of polyester and cotton (and 3 percent spandex), it dries fairly quickly and is reasonably lightweight. Its available in fitted sizes (small, medium, and large/extra-large), but the thing we liked most about it is the patented Flexfit band, which keeps the hat snug, so snug, in fact, that some testers regularly wear it on motorcycle rides across town without trouble. When it comes to staying put, 25 knots of sailing breeze won't phase it in the least.

Bottom Line: Of the American-style hats, our favorite is the Nike Dri-Fit, a quality hat at a competitive price. We also like the classic Mount Gay hat, but its lacking in availability. For those boat owners looking to kit out an entire crew with custom gear, the NEC hat is a good choice.

The folks at Coolibar, which manufactures a complete line of clothing for protection in the sun, sent us three caps to review, the most intense of which was the white Ultra Sport Hat (not included in this roundup). When testers wrapped this around their faces, they noted it made them look like a cross between an Afghan woman and Peter OToole in “Lawrence of Arabia.” For Practical Sailor purposes, we found the middle-of-the-road All-Sport Cap a more reasonable choice. With its long visor, internal draw-cord for tight fit, and a wicking terrycloth sweatband, its a hat that does precisely what its advertised to do. Its also the only hat tested thats recommended by the Skin Cancer Foundation.

This little gem does everything the Aussie-style cap should do. It keeps the sun away and at a very affordable price (about $10). It is also quick drying and has a slick, adjustable string that exits the rear of the hat-so you don’t have to take it off to tighten it-with a clip for the collar to boot. You can find Shade Shack hats at several retail stores, including KMart, Walgreens, and Wal-Mart.

This versatile khaki hat, made of DuPont Supplex-a breathable, cotton-like nylon material thats water resistant and dries quickly-is the equivalent of a hybrid, dual-purpose cap. With the flaps up, it resembles the All-American style cap; undo a pair of snaps, and you have the Aussie look, with limited protection for the neck but excellent coverage of the tops of the ears. There are some other excellent features, including the integrated chin strap and the extra-large ventilation holes with brass grommets. If there was one small demerit for the Tropical Cap, its that the manufacturer contends that it is shrinkproof. After a couple of washings, we found this to be otherwise.

Bottom Line: Testers top picks in this category were the Shade Shack and Ultimate caps. The Ultimates duality gives it a slight edge, but the Shade Shacks rock-bottom pricing earns it our overall Budget Buy spot.

Like the boats aboard which we sail, hats are compromises. What looks terrific on one sailor may look dorky on another. The most comfortable cap you ever wore may not dry very fast or offer much solar protection. And yes, the Red Sox may have won the Series again, but that hat you wear to Fenway is next to worthless on the water.

All that said, two hats rose to the top of our list and take Best Choice honors. The Nike Dri-Fit Hat comes in many colors, has all the attributes one would want in a hat constantly exposed to the elements, and it is widely available at a very fair price. The Ultimate Tropical Cap costs almost twice as much, but in many ways it gives you two hats in one, is well-put-together, and with an SPF rating of 145, it provides genuine protection from the sun, a fact of modern life to which everyone who spends time on the water must pay heed.