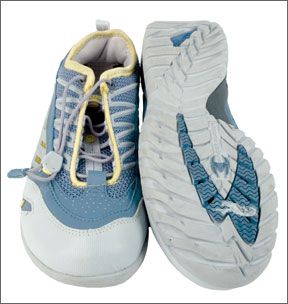 Often times in the personal sailing gear arena, women sailors are left with limited choices&emdash;inflatable life vests and foul weather bibs come to mind. However, when it comes to boat shoes, the selection is endless for both the racer and the cruiser. We tested 13 pairs of performance sailing shoes from the most popular manufacturers. Granted racers and cruisers wont necessarily be looking for the same thing out of a shoe, but we found comfort, grip, and foot protection are key for any footwear to be worn aboard.

Often times in the personal sailing gear arena, women sailors are left with limited choices&emdash;inflatable PFDs and foul weather bibs come to mind. However, when it comes to boat shoes, the selection is endless for both the racer and the cruiser. The styles and colors run the gamut from gray running shoe to pink water moccasin to metallic Mary Jane.

On the heels of our mens sailing shoes review (June 2007), we tested 13 pairs of womens boat shoes. Obviously, we couldnt test all those on the market, but the shoes we tested represent a good cross-section of what is available from the top brands.

This running-shoe-style product was designed by Harken and made by Saucony, a company well-known for its athletic shoes. At press time, the Trimmer had been discontinued but was still available through some chandleries and online footwear stores. (We found it for as low as $25 at

The Trimmer has the grip and breathability of a boat shoe with the heel and arch support of a running shoe. It has a synthetic leather and multi-layer mesh upper, which aids air circulation, keeping feet drier and cooler. The Trimmer also has an ethylene vinyl acetate (EVA) midsole that helps cushion impact to the knees and back, as well as anti-bacterial, silver threads woven into the footbed to reduce odor.

Harkens non-marking sole utilizes a multi-directional siping, which offers excellent traction. Overall, the Trimmer outperformed all other shoes in our grip test. It has good foot protection around the toe and other areas likely to take a beating. Testers also like the shoes laces. The thick, flat, cotton cord were easy to grip and tie whether it was wet or dry.

Its only drawback was its drainage system. After being submerged, the Trimmer&emdash;the second lightest shoe in the test, behind the Tevas&emdash;held a fair amount of water (3.5 ounces).

Testers were disappointed to learn this shoe has been discontinued, as it would have been the top pick otherwise. It outperformed the other shoes in most categories, although wed prefer a better drainage system. If you can find a pair&emdash;particularly one priced as low as we found it&emdash;we recommend snatching them up. The Trimmer is a great shoe, and at $25, its our Budget Buy.

The Valencias Euro-styling is much like the suede bowling shoes of yesteryear. Testers were skeptical that suede would prove an appropriate material for a boat shoe constantly subjected to wet conditions. However, we were pleasantly surprised to find that the Valencias treated suede upper readily repels sea spray and light showers. It doesn’t do as well when its submerged: The 10-ounce Valencia rated in the middle of the pack during the drainage test, retaining 2.7 ounces of water. But when you consider that its a real-leather shoe being compared to shoes made of synthetic materials, its performance wasnt too shabby.

The upper combines the waterproofed suede with breathable mesh. Testers found breathability sufficient during the Florida springtime; however, we expect the Valencia would be too warm for tropical duty.

The Valencia has the same EVA midsole and silver-threaded footbed as the Trimmer. It also has very good grip but accomplishes it through 360-degree radial siping at the foots three major pressure zones. It lacks the stability of the Trimmers wide toe box, however, and so had lower grip test numbers. The Valencias great ankle and arch support offer a feeling of secure footing.

The Valencia offers top-notch support, grip, and odor protection. Testers main concern is water retention. Its a quality-made shoe, and we recommend it for use in cooler climates.

The Helly Hansen line of womens boating shoes&emdash;much like the line of mens shoe we detailed in the June issue&emdash;has very unique styling. For the most part, the look did not fit testers tastes. However, the Hydrator W2 Breathe grew on us. After wearing the shoe in a few regattas and walking around, testers found it comfortable and airy with good drainage. The synthetic leather and mesh upper offers good breathability in even the hottest weather. The shoe sides and lace eyelets feature reflective material that testers figure must be more meant for styling or safety on the street, rather than on the water

The Hydrator Breathe has a removable, perforated EVA midsole that aids in comfort and drainage. It has four, screened “H” cut-outs in the sole sides (two at the inside arch and two on the outer foot) where the water exits the shoe. This, along with the perforated midsole, is part of Helly Hansens W2 (Water In, Water Out) system.

Another characteristic indicative of the Helly line is good foot protection. Added rubber at the toe and heel protect the most abused areas.

One issue we encountered was availability. We had a hard time finding the shoes, and theyre not listed on the Helly website.

These are great warm weather shoes. Theyre not cheap, but if youre willing to spend a little more for a well-made, well-designed shoe, we recommend them.

The Hydro Powers design and performance are quite similar to the Hydrator Breathes. It too has a vinyl and mesh upper for good breathability and a removable, perforated EVA midsole. The W2 drainage system was a success in testers opinions as both top-performing Helly Hansens retained only about 2 ounces of water after being submerged. (Only the Sperry Figawi2 drained better.)

The Hydro Power is a fusion of water and trail shoe, so it has improved support over the Hydrator. It also has a neoprene, sock-like opening and an updated grip system, dubbed “Ultra Storm Grip,” which actually performed worse on the nonskid than the Storm Grip. The sole has varying degrees of siping, concentrated at the ball and heel of the foot.

The Hydro Power offers better foot protection than any other shoe tested. It has a large, hard-rubber toe, and the sole lips up over the foot at the heel and other spots.

The shoes tongue is mostly mesh and is connected to the shoe on three sides, making it easier to slip on and the tongue less likely to slide around.

The Hydro Power has all the great characteristics of the Hydrator Breathe, plus extra foot protection, lower price, and improved design. Its only drawback is its performance on nonskid, so its our Practical Sailor Best Choice for use on teak decks.

The athletic shoe-style Figawi2 features a brushed, waterproofed synthetic leather and layered mesh upper. It has a contoured, foam EVA footbed, which Sperry says promotes water drainage. The shoe also has four screened ports at the upper-rubber sole seam to allow water to exit the shoe. Of the top picks, the Figawi drained the best, retaining only 1.3 ounces of water and keeping the 9.4-ounce shoe lightweight even wet.

The sole incorporates thin, multi-directional siping with separate panels at the ball and heel. Sperry calls the system Quadro Grip, and testers found it performed well.

The rubber sole extends up over the heel about an inch but does not cover the toe, offering better footing but not much protection.

One complaint testers had about the Figawi2 was its cord-style laces, which refused to stay tied.

The Sperry Figawi2 is a lightweight shoe that is as comfortable after three hours standing at the helm as it is in the store. Wed prefer better toe protection, but the efficient drainage system, conservative styling, and unmatched breathability make it more than worth the $80.

The Teva Atrato is a comfortable, lightweight, multi-sport shoe with Good foot protection. At 8.2 ounces, it was the lightest shoe in the test. The synthetic leather and fabric-mesh upper also has vents with metal-mesh backing covered with slotted plastic ribs. Testers expected this unique system&emdash;which Teva describes as 360-degree drainability&emdash;to offer better drainage than the other test shoes as it has larger exit ports and a perforated footbed. However, the Atrato retained 2.7 ounces of water after being submerged&emdash;that was more than all of the other top picks except the Harken shoes.

The area around the ankle is lined with neoprene to reduce friction on bare skin. The lacing system is a thin, continuous line of rounded cord that is cinched with a cam slide. The cord ends and slide are secured via a flap at the top of the tongue that snaps closed. This makes donning quicker and easier, and it also keeps the laces from being errantly snagged. The weak link to this setup is the synthetic leather thumb tab at the laces end. Its not rugged, and easily pulled off the laces of one of our test shoes.

Raised rubber ribs protect the heel, but there is no toe guard. What it lacks in protection, it makes up for in grip. The Atratos sole, dubbed “Spider Rubber,” provided the second best overall grip of the test shoes and tied for the top performance on nonskid.

The Teva offers superb comfort and grip, and better-than-average drainage, all for the lowest price among the top performers, $75. This earns the Atrato the Practical Sailor Best Choice for use on nonskid decks.

Just before presstime, we received a new shoe from Teva, the Sunkosi. At first glance, the Sunkosi looks promising with a thorough drainage system, lightweight construction, and Excellent foot protection. It also has Spider Rubber, so we expect a good showing in the grip test. Stay tuned for a shoe test update.

Below is a brief look at the other shoes we tested. For more information on how these shoes measured up to our top picks, take a look at the Value Guide chart.

Slam Mistral&emdash; Layered mesh upper with suede trim at the sole; adequate breathability, but likely to prove hot in tropical climes; a quality performance shoe held back by poor drainage as neither the midsole or bottom sole have exit ports for water; grip is good; stiff suede trim offers good foot protection.

When it comes to performance footwear on board, look for a comfortable shoe with good grip and good foot protection. Our top picks of the shoes we tested are the Helly Hansen Hydro Power W, the