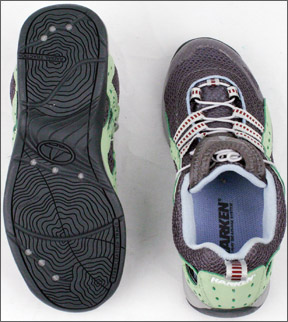 Since we last tested womens sailing shoes in July 2007, dozens of new styles have been released. While we can’t test all of them, we used July 2010s report on sailing sandals as an opportunity to also re-visit sailing shoes, taking a look at some of the newest kicks from the makers of our past top picks. This report focuses on those results.

Top performers in the July 2007 test included shoes from Harken and Helly Hansen, so for this report, we checked out the Helly Hydro Power 3, Helly Hydro Moc, and the Harken HydroFlux. We also tested the Outpost Hybrid from Columbia Sportswear, which was not represented in the 2007 test but is the maker of one of our highly rated sailing sandals. All have non-marking soles.

Columbia is a quality American sports-apparel manufacturer, while Norway-based Helly Hansen started in the sailing gear market 133 years ago. Harken Inc., headquartered in Wisconsin, made its name as a marine hardware maker in the 1960s but has since added apparel to its product lineup.

For this test update, we followed a similar protocol and ratings systems as we did for the mens and womens boat shoe tests (June and July 2007) and the recent womens sailing sandals test (July 2010). We evaluated comfort, construction, foot protection, grip, weight, water retention, and odor resistance

To assess comfort, a group of testers wore each pair of shoes for an extended period and rated them. The ratings were averaged and noted in the Value Guide. (See page 30.) All of the test shoes in this update are well made, so testers noted the pros and cons of the designs, rather than rating construction quality.

Grip ratings were based on each shoes performance on an adjustable-incline testing device, which has interchangeable teak and nonskid fiberglass panels. Donning each pair of test shoes, testers stood atop the device while increasing the incline until the tester no longer had good footing. The tests began at 20 degrees of heel and maxed out at 45 degrees, as anything beyond that steep of an incline was deemed unsafe for testers. We repeated the process with water streaming down the teak and nonskid (via a hose) to simulate a wet deck.

Three of the four test shoes performed the same in all four grip categories-wet and dry teak and wet and dry nonskid. The Hydro Power 3, Harken HydroFlux, and the Columbia Outpost Hybrid all rated Excellent overall. The Hydro Moc rated Good.

Finally, we dunked the shoes in salt water and put them in a black plastic bag for a week to rate their resistance to bacterial growth and odor. The stinkiest of the bunch were the Columbia and the Hydro Power 3, but they showed no signs of mildew. The Harken Hydroflux had a mild odor but it also showed a few black spots of mildew on the inside of the heel.

We compared the shoes performances to the top picks of the July 2007 test and December 2007 test update. Out of the 13-shoe test field, the Best Choice picks in the 2007 review were the Helly Hansen Hydro Power (for teak decks) and the Teva Atrato (for nonskid fiberglass decks). The Teva Sunkosi, reviewed in the test update, was highly recommended, out-performing the 13 others. None of these are still being made, but the Hydro Power and Sunkosi have been updated and are available as the Hydro Power 3 and Sunkosi 2.

To see how some 2007 picks were faring after their time on the water, we re-tested their grip and inspected them for signs of wear. (See “Long-term Test Followup.”)

Helly Hansens Hydro Power 3 sailing shoes have an open-mesh construction from heel to toe that provides excellent breathability. Removable insoles with antibacterial technology allow sailors to take them out for faster drying. This definitely speeds up dry time, but testers found that removable insoles tend to slide around inside shoes. The Hydro Power 3 shoes stayed a little soggy once they were dunked, and testers found them to be the slowest to drain the squish out. Unlike the other shoes tested, the tongues sides are not attached to the shoe, allowing water to flow through freely.

The Hydro Power 3 is an upgrade to the original Hydro Power (July 2007). It has a sturdier frame (made of flexible plastic) and sole, neoprene along the back inside of the shoe and under the tongue, and a looped pull tab on the heel for fast donning.

The Hydro Power 3 also has an improved shoe-lacing design, trading the lace eyelets that were on the original for fabric loops. This is an attractive and easy to use system, but testers prefer a cord and toggle lacing system for sailing shoes. Once shoestring laces are wet, they become difficult to manipulate.

The overlay on the toes and heels offer added protection from toe-stumping cleats. These could be worn just as easily off the boat as onboard.

Strong, sturdy construction and a supportive frame make the Hydro Power 3 an excellent choice for those who have begrudgingly given up the barefoot lifestyle due to foot-support issues.

The Hydro Power comes in three multi-color designs and sells for $100.

Bottom line: Well-made, comfortable, and stylish shoes, the Hydro Power 3 scored high in grip tests but tended to drain slower than the others. PS recommends these for sailors seeking a lot of foot support.

Helly Hansens Hydro Moc is a lightweight water moccasin designed for activities on and around the water. The shoe fits like a low-cut water booty, and its Velcro fastener strap wraps across the foot for a comfortable, snug fit. The Hydro Mocs open-mesh construction allows it to breathe and dry quickly. It has an elastic collar for easy-on, easy-off wear but no pull-on tab. A comfortable neoprene lining runs on the back of the shoe, and removable EVA insoles allow for faster drying times.

As the Columbias have a trail-runner look, wed say the mocs have more of a futuristic Euro-styling. Helly does make a shoe that resembles a trail-runner, the Trail Moc, but the company did not send it for testing.

The shoes have the same Ultra Storm Grip rubberized outsole as the Hydro Power 3, but its grip-test performance wasnt as good, perhaps because the style lacks the support of the plastic frame.

The mocs are comfortable and well-constructed. They come in four colors and retail for $70.

Bottom line: These lightweight water moccasins performed well, but they wouldn't be our first choice for a boat shoe as they lack the toe protection and support other test shoes feature.

When we wrapped up the 2007 shoe test, we were disappointed to learn that the Harken Trimmer, which outperformed other shoes in that test, had been discontinued. So we were eager to check out Harkens latest footwear for women sailors, the HydroFlux.

The HydroFluxs features include toe protection bonded to the shoe body, an antibacterial silver-woven footbed that fights odor-causing bacteria, and a pull-on heel tab.

Made of double-layered, quick-dry mesh, the shoe has nine drainage ports, allowing for quick draining. The screened ports also prevent debris from getting into the shoe. Testers found that the HydroFlux drained quickly and completely, without holding in that last bit of water that tends to squish around.

The HydroFlux is manufactured like a podiatrists dream: It has full-length compression-molded EVA midsoles for shock absorption and neutral pronation; a stability track that controls ankle and foot rotation; metatarsal forefoot support in a wider toe box for improved balance; active arch support that reduces strain and aligns knees; and a molded heel cup for shock absorption and reduced fatigue. Testers found them to be lightweight and comfortable with excellent support and foot protection.

The lacing system uses webbing and a cord-and-toggle system, but the cord is much longer than it needs to be, in our opinion. The excess can be tucked into a neoprene “pocket” at the top of the tongue, but wed prefer the cord to be shorter so that it doesn’t pose the risk of snagging a cleat.

The HydroFlux has radial traction zone soles with a 360-degree siping pattern,

which gives each of the foots three pressure zones an independent area of traction. In grip tests, the HydroFlux rated Excellent overall.

The womens HydroFlux is available in one color and retails for $82.

Bottom line: The HydroFlux is very well made and provides excellent stability and support. Grip ratings were at the top of the pack. We recommend it for those working a foredeck thats often awash and for those with wide feet.

The Columbia Outpost Hybrid performs like a no-nonsense athletic shoe, but looks stylish and feminine. Its speed-lacing system uses a cinch cord and toggle. The Outposts wide-gauge, breathable mesh body with water-resistant overlays allowed the shoes to drain quickly in tests; they retained no water after a few minutes of squishing about. The removable insoles are thinner than the other shoes, but a tighter fit inside the shoe keeps them from sliding around. The shoes snug fit makes them a good candidate for sailors with narrow feet.

The footbed, treated with AgION anti-odor treatment, is contoured and constructed from high-density EVA for cushioning comfort and support. The Outposts support is so good that one tester found the shoes alleviated painful plantar fasciistis. To test the support a little further, one tester wore them for a jog and found them quite comfortable for a couple of miles, but she noted that she wouldn't run a marathon in them.

The shoe bottom features a non-marking omni grip rubber sole that provides traction in wet or dry conditions. The Outpost scored at the same level with the Hydro Power 3 and the HydroFlux: Excellent overall.

It is available in four colors and sells for $75.

Bottom line: The Outpost Hybrid offers excellent support, drainage, grip, and style for one of the lowest prices in the group. They get the Best Choice nod.

All four of the sailing shoe styles we tested for this update are well-made shoes that would serve well for onboard wear. The Helly Hansen Hydro Power 3 offers good support and excellent grip, while the Harken would be a good fit for those with wide feet or those whose feet are frequently soaked. But considering all of our test criteria, the comfortable Columbia Outpost Hybrid gets the top pick in this test field.

In comparison to our past faves, the Columbia performed slightly better in grip tests than the Helly Hydro Power original but was behind the Teva Sunkosi, which still has the best ratings.

While we only tested womens shoes, mens versions of these same shoes are available in the Outpost, Hydro Power 3, HydroFlux, and Sunkosi 2.