Twenty-one years ago, my planned four-year circumnavigation was going on its 11th year. (If you’re young and broke, that’s precisely how a four-year circumnavigation goes, trust me.) We were roaming around Phuket, Thailand when an enticing opportunity landed in my inbox. Friend and underwater cinematographer Peter Zuccarini had a proposition: Would I like to help him with script for a Disney documentary about sharks and volcanos? The pay for a couple week’s work would keep us sailing for another year—and carry us across our next big obstacle, the Indian Ocean. The catch? My fiance Theresa and I would need to take the long flight back to the U.S. to collaborate on it.

While we were back in the states, life­ happened—as they say. I stumbled into a fun job as an editor Cruising World. Theresa and I got married. We sold our wooden double-ender and settled down to raise a family. A year later, our first son was born. The sirens had nabbed us good and hard. (I don’t blame them, they’re just doing their job.)

I knew enough about being a boating editor and the dark abyss of debt to steer clear of big boats for a while. By the time I’d mustered enough funds to rekindle big-boat dreams, I’d learned that a good parent doesn’t fill his kids sails with their own aspirations. So the boat-dream money became kid-dream money, and it all worked out for the best. One son is a UChicago debater determined to solve all the world’s problems. The other is a talented jazz drummer preparing for music school auditions. Nurturing either of these passions while cruising might have been possible, but imagine the scene that would have met us in every harbor—diesels cranking and anchor chain rattling aboard as the other cruisers made a hasty exodus toward a more tranquil spot.

So now, after sixteen years at the helm of Practical Sailor, life keeps happening. Son number two has his bass-pedal foot out the door, Theresa and I split apart to chase different horizons, and every few years doctors scrape rebellious cells off various organs and tell me not to fret—but please come back for check-up in three months anyway. (The hazards of solvents and sunshine are real, my friends.)

Throw in a global pandemic and increasing signs that cabin fever has overcome the dirt-dwellers, and you’ll understand why my heart skipped when I came across a snappy little Sparkman and Stephens sloop for sale up the road. A week later the rough-cut gem was mine, for the tidy sum of $7,000—just $1,000 more than we’d paid for the heroic old boat that took us halfway around the world.

Her name is Opal. She’s a 1971 Yankee sloop, built in Santa Ana, CA by the same team that created the Dolphin 24, one of Practical Sailor’s favorite small centerboarders. I knew the Yankee 30 well, having sailed in the company of one for a few months in western Fiji. Each time our old gaffer lumbered into the next anchorage, we’d be greeted with the same sly refrain, “What took you so long?” (It will be nice to finally have a boat that moves well to windward.)

I’d started this column expecting to say more about Opal, but there will be time for that. And, upon reflection, a self-indulgent soliloquy is a fitting way to introduce a new sailboat. Born by imagination of a designer, and made real by the builder’s hand, a boat is never truly alive until awakened by the dreams of her owner.

Ashore or afloat, the real trick of living is to never stop dreaming. It’s easy enough. Just keep your head above the water—and cover up when you’re out in the sun. 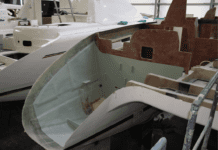 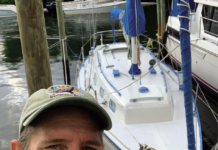 Rhumb Lines: Learning by (Not) Doing 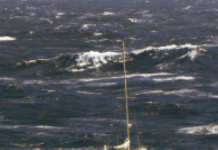