Around Bristol, Rhode Island-made famous by Nathanael G. Herreshoff-they tell this story: In the beginning, Bristol Yachts made rather ordinary boats. Along the way to success, Bristols boss, Clint Pearson, collected some of the most skilled workmen in the business. Somewhere in the 1970s, in order to support about 130 craftsmen, Bristol upgraded sharply and took aim at the big boat, high buck market. It made good sense.

And thats when the centerboard sloop called the Bristol 35.5C was born. She debuted in 1977 and disappeared with the rest of the line a few years ago.

The inestimable Ted Hood designed her. He probably knows more than anyone alive about centerboard cruising boats. Hes done a lot of them.

This one just turned out great, he said. Shes about as small as you can get and still have really big boat appearance and performance. The interior just worked out very well. Hood owned one himself.

She goes right along, doesnt she? he said.

The Bristol 35.5C, which also came in a full-keel version (without the C), is an extraordinarily orthodox boat. There simply are no extremes in design, construction or performance, unless it is in her ability to flaunt her stern downwind and burn a lot of boats when beating in light to moderate air.

Shes what is called medium displacement. Look at her dimensions. Nothing jumps out, except perhaps for slightly less beam than is seen in 35-footers of that era and certainly far less than is seen in more recent designs.

The Interior
Despite the 10′ 10″ beam, the interior reflects Ted Hoods attention to comfortable detail. There simply are no tight spots, no clumsy corners and no head or hip knockers.

You can walk into the head, turn around and even take a shower standing erect, if youre no more than 6′ 2″ in height.

The forward berths are more than adequate. Especially comfortable for one (but tight for two) are the pull-out extension berths in the main cabin. The big quarter berth is for that nose tackle in your racing crew. Luckily, only a few boats were built with pilot berths, because not having them means that the storage space is that much greater. With pilot berths, the boat theoretically sleeps no less than nine, but youd feel like a 49er on a crowded clipper ship headed for the California Gold Rush.

The galley is a joy, with more counter space than many larger boats. Unobstructed, durable flat surfaces are always at a premium when preparing meals or washing dishes. The truly huge ice chest obviously has superior insulation. Even with the engine running the ice lasts well.

The spacious cabin interior is enhanced by a wellengineered fold-down table, which, unlike many, can be rigged in five seconds.

If one were to be picky, the lack of a wet locker aft in a boat of this size might be noted.

Engine access is, at best, mediocre. Its in a narrow compartment, with access in the front only by removing some drawers and the heavy step panel and on the port side through a panel in the quarterberth.

All joinery, laminates and solid wood, reflect the individual skills of Bristols work force. The main and forward cabins are wood-sheathed. The sole is teak with a handsome ash inlay, all hand-layed, screwed, glued and bunged.

Many Bristol 35.5s were customized to some degree. Interior wood, for instance, could be mahogany, cherry or teak, with the latter two carrying a considerable premium. Double sinks in the galley were another fairly expensive option.

The boats deck is a first-rate work platform and, for comfort, the cockpit is the equal of any 35-footer. However, because the seats run the full length of the cockpit, one must climb up and over to reach the steering station behind the big wheel. Its annoying. You cant even slide aft.

Construction
The Bristol 35.5s are solid fiberglass. The hull is built in halves and joined down the middle, which makes possible Bristols fine hull-to-deck joint. The hull is flanged inward and the deck is bolted on top of the flange with a teak toerail also through-bolted. It makes for both a watertight joint and a very rigid structural beam at the rail.

Centerboards frequently are a source of major headaches. However, the Bristol 35.5Cs board, which does not protrude into the cabin sole, must be well designed and executed.

The board is controlled by a low-geared horizontal winch on the coachroof. A stainless steel wire runs forward to a stainless vertical pipe at the corner of the chart table, down and across to the centerline under the floorboards. It makes three turns. The cable is entirely enclosed. If it were to cause trouble, it would be difficult to fix. However, only two of the Practical Sailor readers who own Bristol 35.5Cs report problems. Only a few boats were built before Bristol made modifications to the centerboard.

Sailing Characteristics
Make no mistake: The Bristol 35.5C is tender, as are most centerboarders. In return you get a very lively boat that is quick in any air, like many more modern fin keelers except that with her moderate keel and centerboard, the Bristol 35.5 doesnt require slavish attention to the helm.

Despite being a centerboarder, the Bristol 35.5C, because of her ballast, has a very respectable calculated static stability of 115.

The boats phenomenal light-air performance is delineated in the Performance Package supplied by the United States Yacht Racing Union. In a true wind of 6 knots, close-hauled (44.5 degrees), the Bristol 35.5C, with a 120% jib, should do 3.9 knots. The velocity made good will be 2.8 knots. Shed be heeled only 5. Beam reaching in the same conditions, the boat should do 5.4 knots. In 20 knots true, the boat would do 6.1 knots, but would be heeling 31. Broad reaching in 20 knots, shed turn up slightly more than eight knots.

We’ve spent many happy hours sailing out of Newport, Rhode Island, aboard a 35.5C owned by Dwight Webb, who never has been known to overuse the engine. He’s a sailorman. Beautifully maintained (with all exterior teak varnished) and with excellentsails, including Hood furling on the headstay and a Doyle Stackpack on the main, Webbs boat always moves well in any air.

Hes passed on 10 years with the Bristol 35.5C, which he deems simply, Best boat Ive ever owned.

Conclusion
If a Bristol 35.5C takes your fancy, try for one with either a Westerbeke diesel or the equally satisfactory three-cylinder, 24-hp diesel made for a time by Universal. Avoid the Yanmar 2QM 20H, a twocylinder diesel that struggles unsuccessfully to get up to hull speed.

Beware of a 1978 model without the modified centerboard.

Also, don’t pay extra for a boat with a half dozen headsails. The Bristol 35.5C achieves her polar diagram optimums with a single 120% or 130% jib, which ideally will be on furling gear. Jibs bigger than that simply overpower the boat.

You’ll pay heavily for a newer one, and because so few were built, the older used ones also are somewhat dear. 1981 is about where the ideal prices seem to occur. Those built later than 1981 seem to carry premium prices. 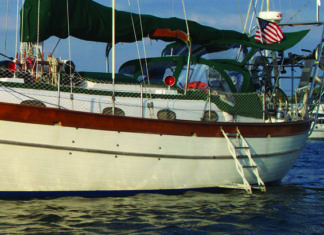