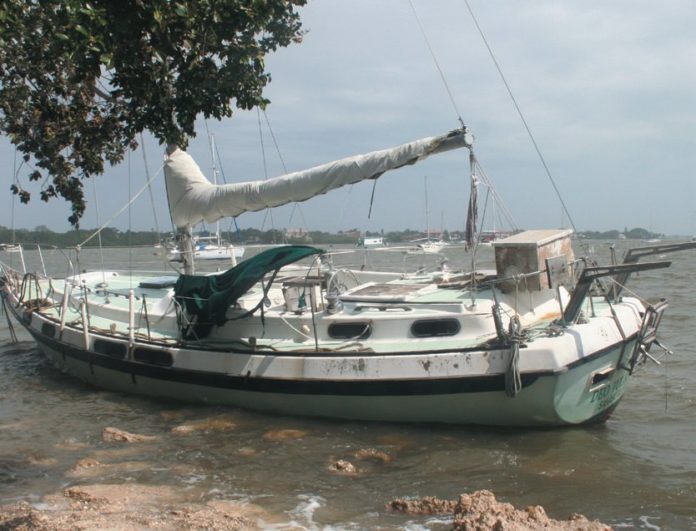 With $655 million dollars marine vessel insurance claims from the 2017 hurricanes Harvey and Irma, there is no shortage of broken boats accumulating in salvage yards. The nations three big damaged boat liquidators – Certified Sales, Cooper Capital and U.S. Auctions are gradually thinning out their listings from Irma and Harvey, but Florence will surely bring a new crop. But just how salvageable are these boats?

Unless you are a boatbuilder, repair boats for a living, or like messing around with a boat more than you like sailing, your first boat should probably not be a storm-damaged boat. The learn-as-you-go approach to boat restoration usually leads to some very expensive lessons.

Having restored a 31-foot Atkin gaff-rigged ketch that was liquidated from a boatyard in the late 1980s, I have a bit of experience. We bought the boat for $6,000, sunk at least five times that into it and sailed for 10 years, so it could be regarded as a success. The advantages of rebuilding your boat from the keel up is that you acquire the skills to be self-sufficient, and you truly know your boat inside and out.

Another success story was the 42-foot Endeavour Lost Boys, which served as a Practical Sailor test platform for several years. The owner, a boatbuilder, purchased her for $18,000 and invested another $40,000 in a refit (including a new diesel). If you ignore the many hours of labor, the boat sold for a profit five years later.

For the industrious sailor who has lots of time, a storm damaged boat can be an opportunity. Here, Ill share five things to consider before going this route.

1. How much does a ship-shape sistership cost? Generally, if the storm damaged boat is not deeply discounted by 75 percent or more, you might want to rethink the project. The used sailboat market is still soft, meaning there are many good bargain boats that are in ready-to-sail shape.

2. Is the engine, rig, and essential structure – hull and deck-intact? If not, a long project is on the horizon. Look for boats with mostly cosmetic damage and no structural damage.

4. Is the boat worth restoring? If you arent in love with the boat, and it isn’t a highly ought-after cruiser, do you really want to pour so much time and money into it?

5. Expect surprises. Apart from the obvious damage, there are almost surely some hidden problems. If the boat was under saltwater, chances are youll not only need to rebuild or replace the engine, youll also need to rewire the boat-a tedious and expensive project.

An old adage says that there is nothing more expensive than a free boat-and that would apply to any storm salvage. But if you believe, as I do, that more rescued boats return to sea than don’t, then you have at least one good reason to take up the charge.