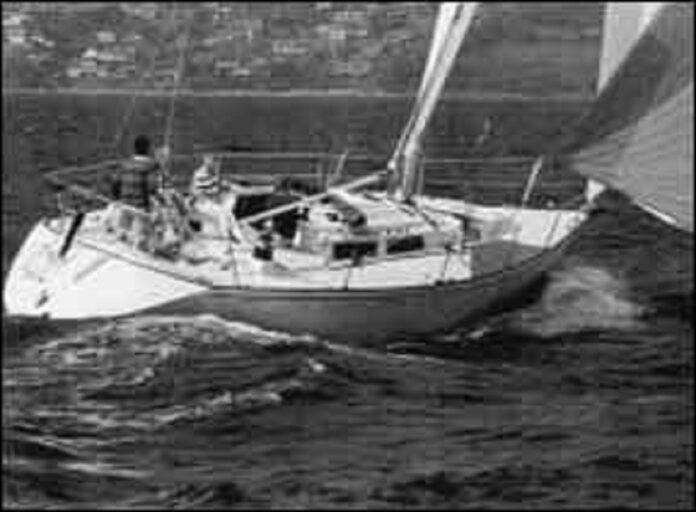 The Frers 41 was introduced in 1988, one of four collaborations between designer German Frers and builder Carroll Marine of Bristol, Rhode Island, which had opened its doors in 1984. She was aimed at the increasingly popular IMS racing rule, which attempts to encourage well-built, seaworthy boats with complete and comfortable accommodations. Frers described the design objective as “a competitive dual purpose boat combining our fastest hull and foil shapes with moderate displacement and a comfortable interior.”

The term “racer/cruiser” has been used by many builders to describe their products, with varying degrees of truthfulness. Some are really cruising boats fashioned after racing boats, but only competitive in races at the club level. Some are pure racing boats, with perhaps a dodger and an enclosed head added to qualify them as cruisers. This series of Frers/Carroll Marine boats, however, are “racer/cruisers” in the truest sense.

In 1988, hull number 1 of this design, Brigadoon V, took five firsts in five starts in the Key West Race Week and finished second overall in the SORC. The boats are still very competitive at all levels of racing,and perform with a degree of style and comfort that outshines many of the newer designs. No stripped out racing machines, they feature fully and finelyfitted wooden interiors, plus many details and creature comforts one would not really expect on a pure racing boat.

German Frers managed to combine sheer, rake of stem, and transom overhang to achieve a classical look that is becoming quite rare, especially in competitive racing boats and their pretenders. The entry is quite fine, and the midship section is gently rounded on the bottom with a narrow waterline beam and flared topsides. Beam and flare are carried well aft to the elegantly shaped transom.

The keel and rudder certainly reflect a 1980’s IOR influence, generous in area and elliptical in plan form. This keel shape serves to lower the center of gravity from what would be the case in a more conventionally tapered fin, though not to the degree of the blade and bulb arrangement now found on the hottest IMS boats. The rudder, too, is not as deep and narrow as found on the latest racers. These broader, less extreme foils serve to make the boat easier and more forgiving to sail, as well as inherently more strong structurally. The vestigial skeg ahead of the rudder is also reminiscent of IOR designs.

With a displacement/length ratio of 226, the 41 is no lightweight. This moderate displacement allows the hull to be built strong and rugged without having to resort to exotic and expensive materials and techniques. It also makes it possible to add the fairly heavy interior without overloading the boat. Further, it results in a seakindly motion and load carrying ability greatly appreciated by cruising sailors.

With the apparently increasing popularity of the fractional rig, the masthead rig appears rather conservative. With triple spreaders and rod rigging, plus a solid vang and hydraulic backstay, it is strong, efficient and competitive. It is also well-suited to the cruising sailor. With such an easily driven hull, the cruiser could be quite happy with a 110% roller furling jib in almost all conditions.

The hull is built with a balsa core, with skins of biaxial and tri-axial E-glass and vinylester resin. Unidirectional E-glass is used in highly stressed areas. An extensive grid of aluminum and E-glass is bonded to the hull to accept the rigging and keel loads. In general, racing boats experience much higher loads and stresses than cruising boats. Rig tension is far greater, and racers will continue to pound to windward long after cruisers have eased off or hove to. A boat that is designed to meet these stresses on a long term basis (that is, not a short-term, throw-away racer) is likely to stand up to anything the cruising sailor will experience.

Balsa coring is also used in the deck, with E-glass and polyester resin. Marine plywood and aluminum plates are substituted for the core in areas subject to compression. The deck is bonded and bolted to the inward-turning hull flange, with 1/4″ bolts on 4″ centers.

Except for small areas of the head and galley, there are no interior liners. Rather, the interior structure is built up of marine grade, teak plywood bonded to the hull and deck. This effectively reduces the sizes of unsupported hull panels and enhances overall rigidity while at the same time making it much easier to inspect, repair or modify the interior.

The difficulty of building a boat without liners is in achieving a neat and attractive finish. Here, Carroll Marine scores high marks. All the bonding is neatly executed, then covered with teak strips. All interior hull surfaces not concealed by furniture receive a handsome varnished ash ceiling. The overhead is finished with easily removed, vinyl-covered plywood panels.

Deck design is fairly conventional and, like the rest of the boat, works well in both racing and cruising modes. With four opening hatches and four large portlights in the cabin and deck, plus the companionway and an opening port to the cockpit from the after cabin, light and ventilation are fine.

All halyards and reefing lines are led aft from the mast to winches and stoppers on either side of the companionway. Primary winches are located on the coamings, with locations for two more winches on islands at the forward corners of the cockpit. Unfortunately, these islands impinge on cockpit space, especially in that they make it difficult to tuck up under the dodger for shelter in rough weather. Even in the best racer/cruiser, compromises are necessary.

Another compromise, of sorts, is the steering arrangement. The 48″ diameter wheel, set in a trough in the cockpit sole, surely makes steering almost effortless. It makes it possible to sit well outboard on the side decks for good visibility of the jib luff when sailing to windward. Standing behind the wheel, even when well heeled, is also convenient. What is not comfortable is sitting behind the wheel, as it is a long reach to the rim of the wheel.

We delivered one of these boats from Bermuda to Newport, shorthanded, and so often spent three or four hours at the helm. Sitting directly behind the wheel was awkward because of the large wheel diameter, and to sit to either side made it difficult to watch the binnacle compass. There was a digital compass among the instruments above the companionway, and its large digits were fairly easy to read except when the spray was flying, further complicated if the helmsman wore glasses, either sunglasses or prescription glasses. If a digital compass were not installed or not functioning, steering a compass course would have been inconvenient. It must be said, however, that the large wheel and the digital compass work out very well most of the time.

Both the headsail sheet tracks and the chainplates for the mast shrouds are located right at the corner where the side deck meets the cabin, leaving the side deck cleanly unobstructed for passage forward and aft. From the mast forward, there is actually a varnished teak toe rail, an attractive and functional touch. From the mast aft, there is an extruded aluminum toe rail with numerous holes for attaching blocks.

We found the boat to be quite stable, and very easily driven. When the wind rose above 20 knots we were able to reef well down and still close reach at 7 to 8 knots.

Down below on the Frers 41, you certainly do not feel that you are aboard a racing boat. As mentioned, there are no areas of exposed raw fiberglass, but rather an abundance of nicely fitted wood. In addition to the teak plywood panels and trim, and ash ceiling, there is a varnished teak and holly cabin sole. Headroom and berth lengths are well over 6′ throughout.

Perhaps the most surprising feature is the after cabin on the port side. On a boat like this, with fairly low freeboard and a very functional cockpit, we would expect a cabin that is tucked under the cockpit to be cramped, but it is not. There is full standing headroom on the fairly large cabin sole, with more than enough room for getting in and out of foul weather gear. Outboard are a hanging locker, drawers and cupboards. The berth is very large, with only a small portion of it tucked under the cockpit footwell, and even that area is still useful and comfortable. A removable panel also permits good access to the 3- cylinder, 35-hp. Yanmar diesel.

The only complaint we have about this cabin is its proximity to the long, nearly flat transom overhang. In port, in any sort of chop, the noise can be annoying. One of those inflatable transom skirts, or some earplugs, might be called for.

Another surprise is the large and functional galley, with double sinks, gimbaled stove with oven, very large refrigerator and abundant locker space. The companionway ladder and engine box are convenient for the cook to brace himself in a seaway.

Aft of the galley is a huge storage space, accessible from the galley and through a cockpit locker. Although there is a pipe berth located here, to use it would be like sleeping in a cockpit locker. Fortunately, the pipe berth is hinged so that it can be swung up and out of the way. Thus, there is room for large items like the life raft, fenders, etc. It is also a convenient place to keep wet foul weather gear.

The nav station is adequate in size, with lots of space for electronics but no convenient book storage. There is no handy and secure place to keep a sextant, but that is probably a sign of the times.

The main cabin is simple, but it works. Two pilot berths are large enough to be useful and comfortable, and also make great storage areas. Since IMS boats are required to carry a dining table, the builders have devised one which stows neatly and securely against the bulkhead when not in use.

Neat molded liners make the head, shower and wet locker useful and easy to clean and maintain. The tops of the forward V berth are fully removable, leaving great sail bins behind. With the nice after cabin, even cruising sailors might choose to keep this as a storage area.

Tankage of 24 gallons of fuel and 87 gallons of water is just adequate; we would like to have a bit more for even extended coastal cruising.

The base price for the 41 in 1989 was $125,000. By the time sails, electronics and other gear were added the price was very close to $200,000. These boats now appear used for $130,000 to $140,000. Though not inexpensive, it still is less than Tartans and C&Cs of the same vintage and size. We think the 41 represents a reasonable choice for the sailor who wants a boat on which he can race at all but the highest level, and still cruise in comfort and style.