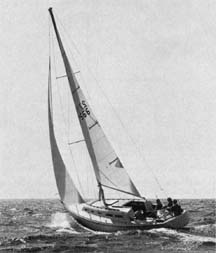 “Ericson Yachts,” we wrote back in a 1986 review of the Ericson 27, “was somewhat of the archetypal production boatbuilder: trendy, performance oriented, colorfully advertised, and, for the most part, successful.”

The company was formed in 1964 by Don and Gene Kohlman, two San Francisco Bay area sailors who moved south to Irvine, California to set up shop. Their first boats were what Don called “an eclectic line,” meaning they grabbed what they could—a modified Carl Alberg design, a 26-footer by W.B. Crealock and a 32′ 5.5 Meter keel boat similar to the Columbia Sabre of that same time.

The first boats were introduced in 1965. In 1971, the CML Group bought Ericson Yachts and ran it until 1984 when Gene Kohlman bought it back. He and Don managed things until 1990, when they were forced to shut down. Pacific Seacraft bought the molds for the Ericson 34 and 38 and resumed production of these two models (the former as the Ericson 35 and the latter as the Ericson 380—see PS, January 15,1998) in 1991.

Ericson was indeed an “archetypal production builder,” competing with Pearson, Cal, Columbia, Islander and the like, all but Pearson being neighbors in Southern California. Greater Los Angeles, specifically Costa Mesa, was the epicenter of production fiberglass sailboat building during the late 1960s and 1970s. Costa “Mecca” evaporated faster than styrene, the result of stringent air pollution laws that made manufacturing too costly, and as a result of a downturn in sailboat sales, one of many in this cyclical business that every 10 years or less beheads those with their necks still stuck out. 1990, if you recall, was the year of the Gulf War against Iraq, and imposition of the luxury tax.

The Designs
A close look at the ‘69 and ‘85 Ericson 32s makes for an interesting comparison. It would be fun to cut out sail plans of a bunch of 32s, designed every few years between 1965 and 2000, and stack them like cards. Flipping them quickly, one would see the overhangs come and go; keels break away from the rudders, get skinnier and deeper; and mast locations move back and forth along with aspect ratios.

The early Ericson 32 was influenced by the CCA (Cruising Club of America) rating rule, of which designer Robert Perry once wrote, “Like all good rating rules it was a development type rule and not a handicap type rule.” Among other traits, CCA-type boats tend to have long overhangs (because waterline length was penalized) and low aspect ratio sail plans with short masts and long booms. To emphasize the point, the ‘69 32’s E dimension (mainsail foot) is 13′ and the ‘85 32’s 11.5′; the P dimension (luff) increased from 31.5′ to 36′. Both have double-spreader masthead sloop rigs.

The ‘85 32 has a slightly longer waterline and retains some of the ‘69 model’s bustle just forward of the rudder—a trick to increase sailing length.

More noticeable are the changes King made to the underwater appendages. The ‘69 32 has a swept back rudder and keel, influenced probably by the latest thinking (then) in Twelve Meter design. On the ‘85 32, the appendages are vertical, with the trailing edge of the keel raked forward. In a Sailing magazine review of the very similar Ericson 35, Perry theorized this change “…may help to make the maximum thickness line more vertical and improve the general performance of the keel.” Nowadays, with so many designers concentrating ballast in bulbs at the bottom of very thin blades with narrow roots, you have almost the inverse of King’s mid-80’s V-shaped keels.

Both old and new 32s are attractive for their time.

Construction
Ericson Yachts, like other production builders of its day, didn’t do anything fancy in laying up and finishing its boats. Yet they are regarded as adequately strong. Hulls are solid fiberglass. Decks are cored with end-grain balsa, and, at least in the case of the ‘85 32, plywood was inserted in place of balsa in “high stress areas.” This is fine for handling compression loads, but does not ease the worry about delamination. In our opinion, no plywood should ever be used on a boat without the end grain sealed with epoxy resin or suitable substitute. Few builders, however, have then or do this now.

With the ‘85 32, Ericson stiffened the hull with a complex inner liner called a Tri-axial Force Grid (TAFG). This molded fiberglass unit incorporates many interior structures previously made from plywood and solid wood, from the anchor locker forward, to the floors and stringers under the cabin sole, to the ice box and engine beds. It’s a much less costly way to build a boat than using individual pieces of wood. The TAFG is bonded to the hull before the deck goes on, and one hopes it is never jarred loose. Where many builders incorporate berth foundations in their liners, however, Ericson built these up from plywood, anchoring them in the TAFG.

A few owners of both boats noted oilcanning in the hull; this most often occurs in the large, unsupported areas forward above the V-berth. An owner of a 1987 model said, “Heavy seas caused hull to flex, popping off starboard shelf trim.” An owner of an 1973 model said, “Hull distorts in heavy weather.”

Others noted the not uncommon problem of thin glass where there are sharp turns in the mold. And quite a few owners of both models complained about gelcoat flaws. Rubber rubrails deteriorate over time but can be replaced…if you can locate a supplier of the molding.

On the ‘69 32s, several owners complained also about mast compression cracking the deck (there is no compression post for the deck-stepped mast; the ‘85 32 has a keel-stepped mast), rudder bearings, wooden hatch leaks, cracked lifeline stanchion welds, and chainplate leaks rotting the bulkheads to which they are attached.

Ballast on both models is lead, much preferable to iron. In the ‘69 32, it is encapsulated in the hull mold. In the later model, it is external, with keel bolts through the TAFG.

Hardware quality is generally good though some items, like winches, may have to be updated. Ericson used Barlows on the early boats, Barients on the later models. Both companies are out of business now. If upgrading, self-tailers would be a big improvement.

Accommodations
The interior plans are workable and straightforward, with a V-berth forward, enclosed head and hanging locker just aft of it, dinette and settee amidships, corner galley to starboard with quarter berth (6′ 6″ in the ‘85 32) and nav table to port. Obviously, there’s more space all round in the later model.

Ventilation for the ‘85 32 includes deck hatches, a Dorade and several opening portlights in the forward cabin and head. In the saloon are two long and narrow fixed portlights—Ericson’s distinctive shape with forward and aft sides slanted. One owner complained that the hanging locker is too small, and that the starboard settee is “severely angled to bow end—narrow.”

The ‘69 32s did not have good ventilation. One owner said, “opening ports would improve ventilation.” (There are, however, two small opening ports.) “Another just called it, “terrible.” Others said the berths are too narrow and the head too small. But one exclaimed, “Interior layout excellent! Good compromise for a boat this size.”

Some like the ‘69 32’s T-shaped cockpit, some don’t. Water collects at the helm because the scuppers are forward but the boat trims stern down. And a number of owners criticized the cockpit lockers for not being adequately waterproofed.

Performance
Owners report that the ‘69 32 is only an average performer. Given its hull shape, it heels quickly to 20° or so, then settles in. Several owners said the boat stops “tilting” at 30°. This is typical of CCA-type boats, in order to immerse the ends and increase sailing length. “It likes to heel but remains stable,” said the owner of a 1975 model. The boat’s relatively short rig is cited as a liability in light winds. Most rate upwind performance better than off the wind. “Only boat I’ve sailed that beats faster than it reaches,” said the owner of a 1974 model. He figures 6 knots in 12 knots of breeze, sailing upwind. But then the owner of a 1973 boat said, “Goes to weather fair; off wind very fast.” Go figure.

An owner in Virginia said no one could ever get his boat to point to his satisfaction, adding that it tacks through 110°.

The boat has no significant weather helm problems and balances pretty well. A number of owners said they’d been through gales of 40-60 knots and the boat acquitted itself well.

Auxiliary power for the ‘69 32 was first a 27-hp. Palmer M60 or Atomic 4 gas engine. But readers listed a number of other power plants, including a Volvo MDIIC, 12-hp. Farymann. Access is poor. One owner modified the access “hole” from the quarter berth. The ‘85 32 came with a 21-hp. 3-cylinder Universal diesel and 22-gal. aluminum fuel tank.

Not surprisingly, owners of the ‘85 32 are much more positive about their boats’ performance. A tall rig was available, which helps in light air regions, such as the Chesapeake Bay. Similarly, the deep keel model outperforms the shoal and wing keels. “Unbelievable upwind and light air ability,” said the owner of a 1986 model.

The first reef is taken somewhat early, around 18 knots. And the fin keel requires some attention to the helm. “Wanders upwind,” said the owner of a 1987 boat. “Big rudder, easy to steer,” said one who owns a 1984 model.

Conclusion
It is clear from owner comments that considerable improvements were made to the 1985 model, solving problems with leaks, mast compression, rudder, and other niggling items. It would certainly be our choice of the two.

The early 32 seems to have an inordinate number of construction shortcomings, not the least of which is the mast cracking the deck, and gate valves on through-hulls that should be replaced with positive action seacocks.

“Aft lower shrouds should have been attached to chainplates bonded to hull or inner bulkhead. Stanchions have no lateral support, some not backed, some can’t be reached from inside. Bilge should be deeper. Preventer crimped original boom on an accidental gybe in heavy air/seas. Especially good light air performer with 150% genoa or drifter/MPS. Boat is sensitive to proper sail selection and set. Very comfortable cruising for two to four. Plenty of stowage. I highly recommend the boat for excellent overall quality and ability.”
— owner of 1974 model in Virginia Beach, Virginia

“Rudder is a spade type. I once bent the shaft crashing off a steep wave in gale conditions. Boat sailed fairly under jury steering. Wood frames for main hatch and companionway leak, allowing water to get to balsa core. Needs compression post for serious offshore work.”
—owner of a 1972 model in Foster City, California

“Extremely happy with my boat re: quality, performance and appearance. Excellent engine. Opted for shoal draft which restricts pointing ability though she turns easily.”
—Owner of a 1987 model in Hilton Head, South Carolina