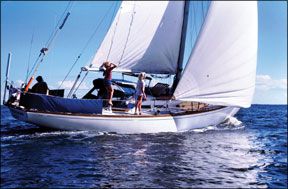 The Ericson 41s history follows a storyline typical of many early fiberglass designs inspired by the Cruising Club of America (CCA) rules. Ray Handy and others from Columbia Yachts started Ericson in the early 1960s with the introduction of the Ericson 26 and Ericson 30. Soon, Bruce King and the Kohlmann brothers, Gene and Don, were on board, and in 1966, the company sea-trialed a foam core plug that would be used to make the mold for the Ericson 41. Ultimately, 50 E-41s were built between 1967 and 1972. Decent boatbuilding and a bad business sense put Ericson on financial rocks by the late 1960s, and the Kohlmann brothers would play key roles in the companys resurrection and future financial ups and downs.

The Ericson 41 was more of an update of traditional yacht design than a radical departure from it. A graceful sheer, lean beam, and overhangs inspired by the CCA racing rules gave rise to a boat that is as easy to look at as it is to sail. Ironically, anyone visiting this years round of sailboat shows will have had a hard time missing the renaissance in lean, low freeboard, long-ended sailboats that are being built by some of the best builders in the country. Its nice to see that classic lines and utilitarian simplicity still have appeal.

As with most trends in marine architecture, when form and function are part of the styling equation its more likely that the boat will leave a lasting impression, but in the long run, the builder makes or breaks the deal. Ericson, based in Santa Ana, Calif., was part of a populist shift in boatbuilding fed by low prices for fiberglass, resin, hardware, and other materials, and even lower labor costs.

Hand-laid, molded, fiber reinforced plastic (FRP) construction had simplified boat building, and more middle-class sailors were stepping aboard 35-40 footers than ever before. To help make the dream come true, a few corners were cut, but ultimately, these boats of the 1960s were a legitimate paradigm shift. With plenty of feedback from the owners and crews who have sailed these boats for decades, the final evaluation of their worth is self-evident. The E-41 was built in an era of trial-and-error engineering and FRP boat building, and the team at Ericson got it mostly right.

The E-41s lean, 10-foot, 8-inch beam, rounded sections, cutaway forefoot, and fin keel reduced its wetted surface and skin drag, adding to the boats light-air capability. A separate spade rudder and modest 6-foot draft helped nudge the boat into a new era, especially when stacked up against much heavier frame-and-plank cousins designed by Sparkman & Stephens, Phillip Rhodes, and Bill Tripp during the early- to mid-1960s. This is a boat that can be sailed across the Bahama Banks and negotiate the Intracoastal Waterway, but still packs a limit of positive stability (LPS) that approaches 140, attesting to her willingness to recover from a deep capsize, an important attribute in a passagemaker.

The Ericson-41 featured in this review has been owned by our new technical editor, Ralph Naranjo, and his wife for thirty years. It has a roller furler on the headstay with a 120-percent genoa that reefs to serve as a working jib. Years ago, he added an inner forestaysail that continues to see considerable use. The inner forestay can be quickly moved out of the foretriangle to make tacking easier when coastal sailing. Spectra running backstays (added to counter loads on the inner forestay) make setting and tying off the backstays simpler. For light-air sailing, Naranjo favors a radial clew drifter/reacher that sets via hanks on a removable secondary headstay. A spinnaker, storm jib, and storm trysail make up the remainder of the sail inventory. Its a cruiser for those who love to sail and are content with the trade-
offs associated with simplicity and ease of handling.

The layout aboard the E-41 is fairly standard for the era. While narrow by todays standards, the beam can be an asset in heavy weather and Ericsons efficient use of furniture does not detract from overall useful space. To port of a user-friendly, four-step companionway ladder lies a functional U-shaped galley. To starboard is a chart table and quarter berth. The saloon provides a spacious dinette that converts to a comfortable double berth, and a pilot berth is stacked above the starboard settee, which extends out to make another berth. Just forward of the mast is an enclosed head compartment to port with hanging lockers to starboard and a comfortable V-berth. Adding a few opening ports and upgrading to modern hatches adds considerably to the comfort below.

The trim work is mahogany, as is the veneer of the plywood. Finish options range from varnish or sealer to paint on the bulkheads and bright finish on the trim. A big plus for this boat is that it is stick built free of pans and liners so its easy to access, clean, and inspect most of the hidden recesses.

The large cockpit and relatively wide sidedecks underscore the E-41s primary role as a sailboat, and although the original winches, tracks, and blocks are Stone Age by todays standards, the deck plan is all set for a modern gear make-over. The winch pedestals are strong and well-fastened, but if new blocks or tracks are to be added, its important to carefully check into how the loads will be spread. The deck will likely need reinforcement, or worse, repair. Backing plates and core replacement with G-10 or another stiffening material may be necessary.

The systems onboard original boats were minimal, and any original wiring will likely need replacing. Aboard most boats, the batteries were stored under the aft quarter berth, and although a few boats came with Atomic 4 gasoline engines mounted under the cabin sole, most owners opted for diesels aft, and the V-drive associated with this option proved to be a mixed blessing. The diesel was installed just aft of the companionway ladder, and the drive shaft angled rather sharply downward on its way to the fixed mounted V-drive. When Naranjo rebuilt the original Westerbeke 4-107 that his hull number 23 was equipped with, he found much more wear on the valve train components of the highest cylinder where the oil flow was most reduced. To compensate, he increased oil flow to the rocker arm assembly by drilling the rocker arm oil delivery holes to 1/8-inch diameter and by slightly increasing the oil pressure.

The V-drive tends to leak oil into the bilge, and the whole drive train arrangement is less than ideal. But the problem can be minimized with good alignment and the replacement of the shaft seal on the V-drive when it starts to become a problem. A few owners have eliminated the V-drive altogether, modifying the engine beds, adding a strut, new stern tube, and turning the engine around. Its a big job, but the boat has gained a following of owners who are serious about longterm ownership, and flip-flopping the engine or switching to a V-drive mounted on the engine block is worth considering if you intend to repower.

Contrary to many boats seen in marinas today, the E-41 is at its best under sail. Although it has been slightly overshadowed by the legendary performance of the Cal 40, the E-41 has distinguished itself well enough on the race course and in the minds of sailors to still be sought after as a classic cruiser capable of offshore as well as coastal challenges. It is the right size vessel for a shorthanded crew, whether it be in light air or when a gale blows the water sideways. The boat was built in an era that preceded reliable headsail and mainsail furlers, electric winches, and a host of other mechanical gear that today boosts a shorthanded crews ability to cope with larger sail plans. The boats light-air efficiency and easy conversion to a double-headsail sail plan allow a short-handed crew to do away with the heavy number one and two genoas and still hold onto good upwind and off-the-wind performance. The double-headsail sail plan and reasonable 715 square feet of working canvas make foredeck work easy. A big, but easy-to-handle, 160-percent, 2.2-ounce drifter/reacher can tune up light-air performance. The Ericson was built during a period when such light-air sails were the answer to near calm conditions, and the engine was held as the very last resort.

So whats an Ericson 41 worth? Today, many owners lavish tender loving care on their boats. Those who have bought new sails, re-rigged, repowered, and professionally painted might expect $75,000 when its time to sell. The cosmetically neglected boats that hit the market with worn out gear may be priced as low as $30-$40K. Either rendition may be a good buy, depending upon whats left to be done.

Naranjo has owned his E-41 for three decades, sailed it around the world, and grown more than familiar with its strengths, as well as its quirks and idiosyncrasies. Hes made deck core repairs and major upgrades, but ultimately the boat has stood the test of time. The hull and deck are sound, the original mast and engine are in-place, and the boat has a proven track record as a capable daysailer, weekender, coastal cruiser, and ocean-going passagemaker.