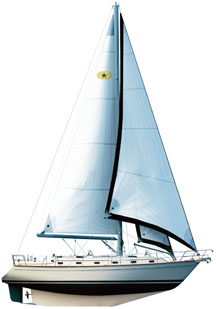 Under the direction of designer and CEO Bob Johnson, Island Packet has for nearly 30 years accomplished what few modern boatbuilders have been able to do—produce more than 2,000 boats targeted at liveaboard and passagemaking sailors who plan to spend months, if not years, on their boats. The Island Packet 440, introduced last year, is a good example of how Island Packet accommodates the peculiarities of dyed-in-the-wool cruisers without slowing production to a crawl, sacrificing safety or sensibility, or straying from Johnson’s original concept.

If you don’t share Island Packet devotees’ view that a full-keeled, moderate displacement cutter is the most sensible boat for long-term cruising, or you’re an around-the-buoys racer who can’t live without a lively helm in light air, then settling for an Island Packet will be as easy as switching religions. Sure, over the years, Johnson has tweaked his boats’ underwater shapes (streamlining the keels and rudders to generate more lift, widening the sterns, and sharpening the entries) and the furling staysails set on a self-tacking Hoyt boom (hardly passé), but at its very heart, the 440 is your father’s Oldsmobile—a station wagon at that. It is consistent, reliable, and built for long hauls.

Design
In profile, the IP 440 is a bit of a mixed breed. It has the traits of a traditional cruising boat: raised cabintop, high freeboard, a light spring in the sheerline, and a short bowsprit that is equipped to handle two working anchors. The stern, however, features a modern reverse transom with an expansive swim platform and stairs. This makes it easier to transfer jerry jugs from a dinghy, adds to waterline length, and helps diminish the slab-sided look that usually accompanies high freeboard.

Below the waterline, the cross-section harkens back to traditional full-keeled cruisers, but the keel is foil-shaped for better lift. The rudder, too, has been given a finer trailing edge.

In plan view, the beam widens fairly quickly at the bow, reaching its maximum—14 feet, 4 inches—midships. The aluminum, double-spreader rig from Charleston Spars features continuous rigging (no intermediates to tune aloft) and twin backstays. The mast is keel-stepped. The outboard chainplates are a rugged design that Island Packet modified about 10 years ago to remedy a potentially serious problem: Water leaks at the deck and collected in fiberglass pockets where parts of the chainplates were concealed, which could promote hidden corrosion.

The IP 440 comes standard with a roller-furling main. The jib is cut higher and leads farther aft than on previous IPs, permitting slightly tighter sheeting angles, but it still chastises those inclined to pinch.

Deck
Johnson’s pragmatic design philosophy carries forward to the deck details. In the cockpit, a huge sail locker sits under the starboard settee, allowing access to the shore power system, the steering, and the optional autopilot. Another big locker is accessed under the opposite settee.

All running rigging is led aft to the cockpit. Tending the mainsail or staysail sheets—led to winches at the companionway—requires leaving the helm, not a huge strike for a pure cruiser. There are four well-placed padeyes for the helmsman and crew to clip into. We like the nice, fat, 2-inch-diameter twin cockpit drains. Two cockpit line-storage bins eliminate clutter. The boarding platform has molded seats, and a hot and cold shower.

The divided anchor locker, accessible through a Lewmar deck hatch, drains to the bilge with a shutoff valve.

Accommodations
Four people can cruise comfortably for extended periods on this boat, and with 260 gallons of water and 400 cubic feet of storage space, you can probably carry six for short periods without a mutiny.

The galley is U-shaped to starboard with a clear view of the saloon and plenty of room for storage, dedicated shelves, and cabinet space to keep mealtime essentials close at hand. The 12-volt fridge/freezer, a Frigoboat keel-cooler design, keeps food cold, but there’s only one lid to access both, allowing precious cold air to escape unnecessarily. The deep double sink, a slide-out trash bin, and two hatches over the galley are nice touches.

The aft stateroom to port has an island berth running diagonally (awkward for sleeping at sea, but the saloon settees will do fine for this) and a separate door to the port head which is also accessible from the main cabin.

The saloon is well lit, and has excellent ventilation through three dorades, eight hatches, and 12 opening ports. The starboard settee pulls out to make a double berth.

The forward cabin is well aft of the bow, making room for an island berth. The L-shaped forward head allows for a separate shower, but puts the vanity sink outboard, requiring you to shut the seacock when the boat is on a starboard tack.

Systems
The diesel is a reliable 75 Hp 4JH3TBE turbo-charged Yanmar, with good accessibility. The alternator is a 110 Balmar with a digital controller. All batteries are AGM; the house bank is 400 Ah. A galvanic isolator and Charles Industries 60-amp, 3-stage charger are standard. Pre-tinned copper wiring is well labeled and cleanly routed. Our boat had the optional MAS 8 kW generator and a heavy-duty electric windlass from Lighthouse Marine, also optional.

Mast and all underwater metals are electrically bonded, although the boat does not have a lightning protection system. Tankage is low in the hull below the cabin sole, adding to stability and proper trim. Island Packet recently began building its water and holding tanks out of fiberglass. The fuel tank is high-grade 5052-H32 aluminum.

Performance
We sailed the boat on St. Petersburg Bay in St. Petersburg, Fla., with a half load of fuel and water. Winds were about 5-10 knots when we started, increasing to barely 10 knots by afternoon—lousy conditions for a full-bodied cruiser. There was a very light chop. Handling under power was good, given the handicaps of a full keel. It turned in about 1.5 boat lengths, and obeyed steering in reverse soon after starting from a dead stop. Our boat’s optional bow thruster took the challenge out of docking.

In the light stuff, the rack-and-pinion Lewmar Cobra steering felt a bit stiff, and we managed only about 4 knots in 7 knots apparent wind on a beam reach. The boat tacked through about 105 degrees, and though we could probably sail higher with more wind, the boat clearly at its best full-and-by. It lost steam broad reaching, when the staysail is best furled or used as a steering sail to balance the helm.

When the wind picked up to about 10 knots, we managed to hold about 4.2 knots on a beam reach. The boat tracked true for five minutes without tending the helm, one of the great advantages of a full keel. We’d definitely opt for a cruising chute and consider a folding propeller.

Conclusions
As much as “performance” cruisers denigrate full-keel boats, they make sense for cruising: They maximize stability with minimum draft, they track well, and they’re forgiving in the event of a grounding.

In terms of construction, systems, and accommodations, the Island Packet 440 sets a very high standard. Where it misses its mark, it misses by inches, not feet. The IP 440 has the essentials to cross an ocean, and we’d not hesitate to take it on a tradewind circumnavigation. Though a conventional mainsail likely would hurt resale, we prefer it for extended cruising. Island-hoppers and coastal cruisers, will, in all probability, be happy with in-mast furling, but we still like the simplicity and better performance of a well-cut cruising main.

Light wind isn’t the IP 440s strong suit, but on a long tradewind passage, it should hold its own with many fin-keel designs of similar length and displacement, and it will almost surely deliver a less strenuous ride.