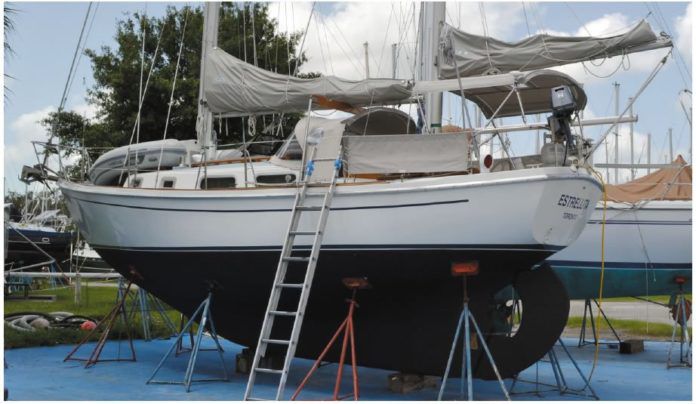 The hull of the Seawind II is a solid lay-up. The deck and cabin trunk are balsa cored. The top of the coachroof, in the way of the deck-stepped mast, is cored with solid, filled epoxy for greater compression strength.

The hull-to-deck joint is complex and extremely strong. Both hull and deck have outward flanges at the sheer line. These were coated with 3M 5200 sealant, and a teak batten was placed between them, laid on flat. Hull, deck, and batten were then through-bolted vertically with stainless-steel bolts. After the sealant cured (which took several days), the joint was ground flush on the inside and heavily glassed over. On the outside, a heavy aluminum extrusion was filled with bedding, slipped over the flange, and fastened horizontally with screws into the teak batten.

This was an incredibly labor-intensive joint, substantially improved over the previous Seawinds joint, which had a reputation for developing small leaks. The aluminum extrusion makes an excellent rubbing strake, but damage to it would require getting a replacement piece, rather than a patch job. This joint looks a bit massive for a boat of this size, but it is excellent for a serious cruising boat.

The ballast is lead, molded to shape and glassed into the keel. While this technique eliminates keel bolts, it also makes the fiberglass hull more vulnerable to grounding damage.

The Seawind IIs mast is stepped on deck, and uses a massive oak compression frame under the cabin trunk for support. This frame forms the head door framing, and is solidly, though a little crudely, attached to the top of the ballast. Some owners have reported having rot issues in the compression posts under the head thanks to standing water on the top of the keel. To get rid of the rot, the posts have to be replaced, and the new ones should be fully epoxied to prevent future rot.

Seacocks, used on all through-hull fittings, are through-bolted to the hull and have double-clamped hoses that are cheap insurance for any boat.

There is very little exterior wood on the Seawind II. The molded toerail is capped with teak. There are teak handrails on the cabintop, teak trim around the edge of the cabin, and a teak bowsprit platform. Thats it. Even the dorade boxes are molded in. This results in low maintenance, a highly desirable characteristic on a cruising boat, but one that leads to an appearance of austerity that can border on plainness.