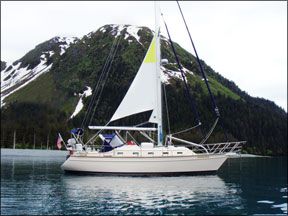 A storm trysail rarely gets the close look it deserves. Designed to replace the mainsail in a severe storm, it spends most of its life in the sail locker. The sail is required by offshore race rules and is a must for ocean-voyaging boats, but most modern production boats aren’t even set up for a trysail.

The trysail hoists on the mast, but must be capable of flying independent of the boom. To make setting the sail as easy as possible, the boat’s mast typically has a separate parallel track for the trysail. Feeder tracks that route the trysail into the mainsail track can work in some cases, but are generally less desirable. Stand-off tracks for in-boom furling, as well as some stack packs, and static lazy-jack systems can complicate a retrofit.

Trysail sheet blocks should be mounted port and starboard allowing the sheets to lead fairly to a winch. Snatch blocks are not the first choice for this job.

It is best to work closely with a sailmaker and/or the boat’s designer to get the right size and shape trysail. It should be cut flat, and the center of effort located to optimize stability and helm balance. Generally, the trysail’s clew should be just above the boom, its tack just above the furled mainsail’s head, and its head near the mid-point of the mast. It must be configured so that sheets clear dodgers and boom gallows. Corners and edges must be heavily reinforced. Always stow the sail with pendants and sheets attached.

International Sailing Federation (ISAF) Offshore Special Regulations state that a storm trysail’s luff and foot shall not exceed 17.5 percent mainsail luff x mainsail foot length. A cruising trysail will often be smaller. The ISAF regs also cover construction details. Aromatic polyamide fibers are out, but Spectra and Dyneema are fine. No headboards, no battens. A high-visibility cloth or patch is a must.

Hasse’s sails feature a lot of hand stitching, particularly for chafe protection. This raises the cost, but it also brings the project within the reach of the do-it-yourself sailmaker who is handy with a palm-and-needle. With your input, any good sailmaker can craft a rugged trysail.

The photos on the facing page compare two Dacron trysails for a mid-size cruiser. Both have about the same shape and cut, but a close look at the details reveals important differences. The observations in the photo captions serve as a guide for inspecting or commissioning a trysail, but many also apply to a heavy-duty cruising mainsail.