A leading cause of anchor dragging is yawing so vigorously that either the soil around the anchor is liquefied, or the anchor simply capsizes. We studied this phenomenon in a report last year (see “Yawing and Anchor Holding,” PS February 2020). The anchor may reset, but it may be either clogged with mud or moving so fast that it is unable to dig. We’ve investigated methods to reduce this and published some of them by bits and pieces (see “Other Methods to Control Yaw”). One of the things we tested was rigging a drogue from the bow to reduce the speed at which the bow falls off when yawing. However, it didn’t seem very effective when compared to other methods, so we abandoned that line of investigation. Since then we’ve learned a few more things and feel that perhaps we were a little hasty. So we’re taking it up again.

We’ve heard of cruisers lowering everything from buckets to storm drogues off the bow. Some attach the drogue to a bow cleat, others attach it to the rode 6 feet or so in front of the bow. We tested Davis Industries Rocker Stoppers and a Burke Marine Seabrake GP24L.

Our test boat can be adjusted from steady at anchor to yawing wildly by varying the bridle and the positions of the underwater foils. Raising the centerboard and leaving the rudder down is sure to make any boat unstable, as it tries to rotate around the rudder and sail off on a new tack. In this configuration the boat will yaw through 135 degrees and tug nearly three times as hard on the anchor as when anchored with a bridle with the board down. (We’ve sailed some of the best new generation anchors right out of the bottom in just 10-15 knot winds.)

We tested using 100 feet of rope rode in 5-15 feet of water in conditions ranging from flat water and 10 knots to 20 knots and considerable chop. We weighted the tail of the drogues with loops of chain ranging from 1-6 pounds. We tested drogues deployed from the bow and from the rode.

A drogue will always deploy at 90 degrees to the rode, whatever the angle of yaw may be. Obvious really, since the motion of the boat when yawing must follow an arc described by the rode. This means that once the boat starts yawing, the drogue will angle astern as much as 45 degrees. It also means that unless deployed from a bowsprit or from the rode, the drogue will pass under the hull when the boat tacks. A weight of at least 1-pound is required to sink the drogue below the bow.

Rode length. Shorter drogue rode allows the correction force to start sooner, but the drogue rode must be long enough to allow the drogue to stay in the water and pass under the bow when yawing. This will typically be about 1 ½ times the distance to the waterline, but adjust as needed. We started our tests with the drogues secured to a bow cleat. Because the anchor rode angles down to the water, the drogue rode can be shorter when it is attached to the anchor rode. This also increases leverage.

Weight. Our initial hypothesis was that a minimum weight would allow the drogue to quickly swing to the side and thus provide more correcting force. We reduced the weight until the drogue rose up near the surface on each swing.

However, we observed that a heavier weight insured that the drogue sank to the neutral position (straight down) more quickly, making it ready for the return swing sooner. More weight also kept the drogue below the surface chop which increased the available force. As we increased the weight to 6 pounds by increments, the drogues stayed straight down and were slightly less effective in lighter winds. We settled on 2-3 pounds as optimal, but this will vary with the size of the drogue, the boat, and the severity of the weather. We also decided that chain is the most convenient weight; it’s easy to adjust, easy to store, and it won’t harm the deck if you drop it.

Depth. Even with weight keeping them below the surface, the drogues were jerked violently up and down in choppy conditions, reducing their effectiveness and life expectancy. The Seabrake would collapse and refill and the Rocker Stoppers danced crazily. So we deployed them from the rode about 4 feet in front of the bow. We had been curious how that would change their effect on yawing.

Effect when attached to the anchor rode. Although a drogue can’t stop the up-and-down motion of the bow, it can reduce the vertical motion of the rode, behaving like a huge hand holding the rode at a fixed depth. A Seabrake may be only 24 inches in diameter, but it contains about 250 pounds of water and is not easily moved. The Rocker Stoppers also worked, although a bit less powerfully.

Effect of sea state. So long as the drogues are located below the moving portion of the waves, any tendency to fill and collapse, or in the case of the Rocker Stoppers, dance around, is completely eliminated. They just sit there, unmoving, holding the rode motionless.

Effects of current. In a current the boat will often do a crazy dance, and when the current gets against the keel, the forces are hard to predict. The few time we were caught in current, a drogue streamed from a stern cleat worked like a charm, pulling the boat back in line with the current.

Chafe. When the drogue was rigged to the rode, the motion of the rode on the bow chocks increased dramatically. This must be addressed with chafe gear or a very smooth bow roller. The farther in front the bow the drogue is rigged, the less noticeable the movement will be. At 20-30 feet out it becomes insignificant.

Because drogues act only after the boat begins to swing, they do not greatly reduce the change in the heading angle of the boat during yawing. Nor do they greatly reduce rode tension, which is mostly being exposed on the side to the wind and waves.

However, with the drogues deployed, the boat swings about 1/3 more slowly and the portion of the arc traversed is reduced by about 40 percent. This reduces the degree of change in angle of pull on the anchor, the rate at which it changes, and if the drogues is on the rode, it reduces the hobby horsing component of rode tugging at the anchor. Although we could not measure the combined effect, it seems clear a drogue increases anchor security far more than appearances suggest.

Yaw reduction by drogues does not seem to be additive with other methods. The hobby horse dampening, however, would supplement the yaw reduction of bridles and riding sails.

The required number of Rocker Stopper cones will vary. Four seemed about right for our 24-foot boat. We’d increase that to six for a 30-foot boat. A matching fabric drogue will be similar in size to one used for storm management (See “How Much Drag is a Drogue,” Practical Sailor September 2016).

If your boat is exceptionally active at anchor, yawing through 70 degrees or more, a bow drogue may have a place in your anchoring tool box. We also strongly recommend you explore other means to reduce the swing, such as a riding sail, bridle, kellet, hammerlock mooring, or chain rode. Each boat responds differently to corrective measures.

When deployed from the rode the increase in chafe potential concerns us. This shortcoming is not a show stopper, but it is something you will need to address when anchoring in open waters. Does the reduction in vertical movement of the rode outweigh this challenge? We think it will in bumpy anchorages.

The Rocker Stoppers are inexpensive, easy to store and easy to rig. Most storm drogues would work, although we believe cone-style elements are more stable in this pulsing application. A sturdy fisherman’s drift fishing cone should work, since we’re not sure we’d want to wear out our fancy storm drogue with this sort of every-night use. Or you make a sort of miniature series drogue, just for this use.

The drogue only begins to do its work once the boat begins to swing, so it does not completely eliminate the bow’s tendency to fall off in a gust, or when a wave shoves it in one direction. In addition, although they can reduce the dynamic loading once the boat is swinging, they don’t do much to reduce the amount of tension on the rode, as does catenary and some of the other methods we’ve looked at.

However, once the bow is moving, the drogues introduce resistance which ultimately limits how far the boat’s bow swings to port or starboard. Our testers found that the boat swings about 1/3 more slowly and in arcs that were about 40 percent smaller than those traversed without the drogue. 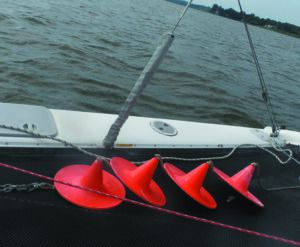 1. Elements are 18 inches apart, positioned between overhand knots. Chain is easy to handle and won’t damage the deck if dropped. 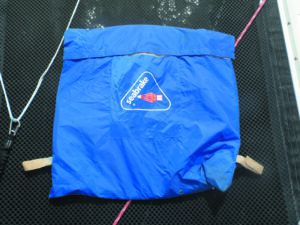 2. The Sea Brake stows flat in a 2’x2’ bag that fits in most anchor lockers. 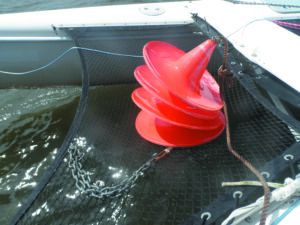 3. The Rocker Stoppers nest inside each other for storage. 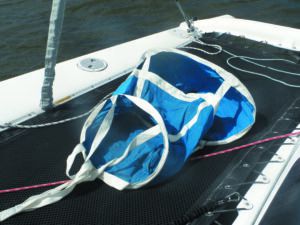 4. A Seabrake may be only 24 inches in diameter, but it contains about 250 pounds of water and is not easily moved. 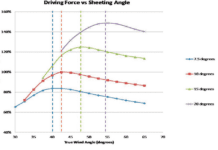 Setting Up Your Own ‘Floating’ Genoa Lead