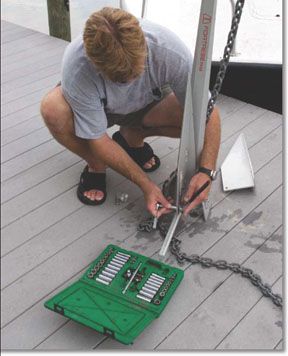 This spring, we published a two-part anchor series that tested 30 pieces of steel and aluminum for their holding power in soft mud. Some were indescribable, odd-looking contraptions, while a slew of others were standard Danforth-style hooks. To keep things under control with such a plethora of anchors, we elected to test all of the adjustable anchors at their standard setting only. Some manufacturers, as well as a few readers, questioned our decision, saying the anchors should have been tested in all configurations. And thats exactly what we did this time around.

Condo construction engulfed our usual anchor test site in Sarasota, Fla., and forced us to seek out a comparable location. We found one at a residential boat ramp in Palmetto, Fla. It had everything we needed. A diver confirmed the bottom composition to be equivalent to our old site: soft mud with a sprinkling of small shells.

As was the case in previous tests, we used an electric winch on shore to apply pressure to the anchor rode. the 12-volt DC-powered, 4,000-pound winch was mounted on a wooden frame and positioned in the back of a pickup truck parked on the boat ramp. Moving the truck up or down the ramp allowed us to change scope as needed. test procedures were as follows: About 15 feet of cable was pulled off the winch and attached to a Dillon dynamometer, which in turn was connected via shackle and hook to the anchor rode. the rode consisted of 5/8-inch anchor rope spliced to 10 feet of 3/8-inch chain, a setup typically found on boats from 20 to 45 feet. Shackles were used as needed to connect the anchor to the chain.

THE TEST
Adjustable anchors were tested in all configurations. Several loops were tied in the rode to provide quick connections to the test gear. this also allowed for variations in exact anchor sets and helped us test at both a 3:1 and a 7:1 scope. We calculated the amount of anchor rode to pay out by taking into account the water depth and the height of our winch above the water. crew aboard the test boat carefully placed the anchor and then retrieved it following the pull tests. Anchors sometimes came up with heavy mud clinging to the flukes. testers made sure each anchor was clean before the next attempted set.

Once an anchor was properly placed, a tester onshore pulled the slack from the line and attempted to set the anchor by hand. After a set was assured, the rode was connected to the test apparatus, and the winch was engaged. our goal here was not to apply maximum pressure, but rather to apply a reasonable load-in our case 500 pounds, and then see whether the anchor would maintain its hold in the soft mud once the pull stopped.

During each test, we rated each anchor for how well it set, made comments about its performance, and recorded its sustained holding power. Anchors that nestled right into the mud and immediately held line tension were rated excellent for setting. If an anchor was a bit slower to set and took less than a 5-foot pull of line, we rated it Good. Anchors that took multiple attempts to set were rated Fair, and if they failed to set after three tries, we rated them Poor.

When applying pressure with the winch, we tried to hit 500 pounds in a single steady pull. Some anchors hit it right away with minimal dragging, some took a longer pull to do it, and still others never hit 500. they simply dragged across the bottom. once the winch brought the dyno up to 500 pounds or we reached the length limit of our pull, we stopped the winch and watched the dyno. Some anchors held firm, some slowly let off pressure, while others fell off fast. We also noted approximately how far an anchor dragged during the test. Holding power shown in the table and mentioned in the text was the maximum load the anchor held after allowing at least a minute for any slippage to stop.

WHAT WE TESTED
This review covers anchors from three manufacturers that offer adJustable settings. Fortress FX anchors have two-position shanks: We tested the FX-11 and the FX-23. Spade makes the curved-shank Spade Sword (formerly the Oceane); it has a second hole in the shank to divert the chain angle for soft-mud anchoring. We tested the Sword 15. The last anchor in this test is the Super Max model 16; it has a three-position adjustable shank.

Fortress ships its anchors unassembled. After unpacking, it takes only a few minutes to put one together. Since these anchors can be disassembled, long-term, out-of-the-way storage is less of a problem than with some larger, more bulky anchors. If you plan to disassemble this anchor (or any anchor that uses Nylock nuts), have some spare Nylock nuts onboard. These nuts can lose their ability to lock after repeated use.

The Fortress anchors also have removable mud palms. These small aluminum plates bolt to the crown of the anchor, and according to Fortress, they make the anchor set faster in any type of bottom. Fortress recommends the mud palms be permanently installed, so we complied by installing them on both anchors.

Both the FX-11 and FX-23 performed well at the 32-degree fluke angle, generating between 350 and 450 pounds of holding power depending on the anchor and scope.

Switching the anchors from 32 to 45 degrees took one of our testers about five minutes, but it proved to be a fruitless task. We were able to set both anchors at the short scope, but when we applied pressure to the anchor rode, both dragged through the mud with the dyno reading between 100 and 200 pounds. At the longer scope, we couldnt get either anchor to set in three tries.

Bottom Line: These lightweight anchors are easy to tote, they disassemble for storage, carry a lifetime warranty, and hold well under normal conditions. In our test, the anchors performed poorly at the 45-degree setting.

SPADE SWORD
Sword anchors are single-fluke, plow-style devices featuring welded construction from hot-dipped galvanized steel. They are available in four sizes from 8 to 32 pounds. We tested a 27-pound model. It has one shackle attachment point at the end of the shank for normal anchoring duties and another attachment point several inches down the shank for soft-mud bottoms. A second shackle is attached to the chain rode and secured to the inboard hole in the shank when anchoring in soft mud. According to the manufacturer, this changes the chain angle and increases soft-mud holding power. The Sword has a one-year warranty. West Marine has dropped this anchor for 2006, so it may be more difficult to find than in past years.

In its normal, single-shackle configuration, this anchor set well at both scopes and had fair-to-good holding power. However, it dragged long distances at both scopes. When we added the second shackle and lowered the chain angle, setting ability remained excellent, but holding power fell off significantly as the anchor dragged through the mud with a dyno reading of 150 to 200 pounds, depending on the scope.

SUPER MAX PIVOTING
The Super Max Pivoting anchor is similar in design to its cousin, the Super Max Rigid. Both are plow-style anchors with a concave, shovel-shaped palm constructed from hot-dipped galvanized steel. They are available in six sizes, from 18 to 115 pounds.

PS tested a Max 16 model, a big, bulky, and heavy hook that tips the scales at 45 pounds. Add in another 50 pounds of mud, and pulling this brute proves to be a real chore without a windlass. (The crew on the test boat can attest to this.)

The pivoting Super Max has a three-position hinge located about mid-shank that can be adjusted for bottom composition. The lowest position is for sand, the middle for mud, and the highest for ooze and soup. We tested at all three positions.

In performance testing, the anchor set easily on the first attempt five out of six times. The one Fair rating came when we had a bit of difficulty setting the anchor at the long scope with the shank in the lowest (sand) position. Holding power variations were fairly substantial at the different scope and shank settings. The Super Max did manage to hit 500 pounds in five tests-three at the short scope and two at the long scope-but after about a minute, it always fell off. Holding power in these five tests varied widely and ranged from 150 to 375 pounds. On the remaining long-scope test, the anchor plowed through the mud while pulling 250 pounds on the dyno.

This anchor is quite a pricey piece of steel; the 45-pound Super Max Pivoting model 16 costs $475. It carries a one-year warranty.

Bottom Line: Its pricey, heavy, and performed erratically in this test.

CONCLUSIONS
Our tests indicate that the mud positions on the anchors we tested did not work to enhance performance in the soft mud of the test site. The For-tress anchor, in its normal 32-degree configuration, showed the greatest holding power. Were sure there is some mud somewhere with the right consistency where an anchor maker can demonstrate that their mud position is a valuable asset. We simply did not find that to be the case here.