A big rollbar-style anchor on a bow roller is now synonymous with cruising. They are efficient in many types of bottoms and reliably rotate or reset when the wind and tide change. Unfortunately, they are shaped awkward and are difficult to stow anywhere other than a bow roller. Lacking this, many smaller boats, both sail and power, are forced to store the anchor in either a shallow bow locker, a snag-prone railing bracket, or in a lazarette.

Shallow anchor lockers on many small boats only allow enough room for a Danforth-style anchor, a folding fishermen, or a Northill utility anchor, which has been out of production for many years.

Mantus first developed a no-tool knockdown mechanism for the Mantus dinghy anchor (See PS December 2015, Dinghy Anchors: Big Anchor Tech Scaled Down). A year ago, they provided us with a prototype of a 9-pound and 13-pound versions, attaching the shank to the fluke and the roll bar to the fluke using oversize studs in place of bolts.

To disassemble, the rollbar is pulled to one side to disengage a headed stud at each end from a slotted hole. The shank is removed from the fluke by pulling a spring-loaded retaining pin and sliding the shank aft. The entire operation takes about 30 seconds.

We’ve been using the 13-pound prototype for one season on our Corsair F-24 test boat. We’ve subjected both the 2-pound and 13-pound folding Mantus anchors to severe yawing, 180 degree reversals, and overloads countless times, wondering if the stud mechanism might come loose, but it never has.

Fine sand often makes the pin and stud mechanism a little sticky, but it never jammed solid. However, the rollbar became sprung after about 50 uses, the result of forcing it when slightly stuck.

Without the spring tension to hold it in place, the rollbar was no longer securely held. This is not something weve experienced with the smaller version of the anchor, which has seen far more extensive use. We reported our findings to Mantus, who said they had no immediate plans to introduce the anchor to the market, as it was still in development.

We like the idea of being able to set a roll-bar style anchor from a small boat, but were still searching for the perfect anchor that will lie flat in a locker. 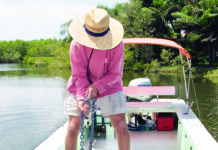