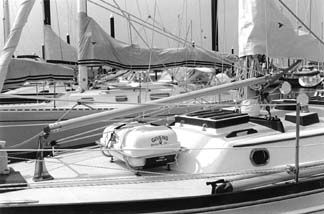 During the 1960s, the CCA (Cruising Club of America) rating rule promoted boats with large mainsails and smaller foretriangles. Despite the fact that many designs didn’t balance well with full main and working jib, even the genoas on these boats weren’t so large as to require big, multi-speed winches. Still, sheeting in could be a grind, and designers like Garry Hoyt sought to eliminate this chore by developing unstayed cat rigs, beginning with his Freedom 40.

Later Freedoms were sloops, but were forced to add small, vestigial jibs for improved upwind performance. The Nonsuch line never bothered. What’s a few degrees of upwind performance compared to the convenience of a single, self-tacking sail? The sales of such boats confirm the belief of Hoyt and others than many sailors don’t want to exert themselves sheeting in large headsails.

During last fall’s boat shows, we couldn’t help but notice the number of boats offered standard with self-tacking jibs, some on clubs. Now we’re back to pre-CCA days, back to WWII and earlier, when multi-speed, self-tailing winches didn’t exist and large headsails were, henceforth, an impossibility.

Designed properly, a modern boat can sail quite nicely with a large mainsail and working jib no larger than 100% of foretriangle. Today’s boats are lighter, which helps, too.

There is a long-standing debate over the use of clubs, that is, the “boom” used to attach the clew of the jib. On the one hand, critics say, the club clutters the foredeck, makes accessing ground tackle more difficult, and can pose a safety hazard should a wind shift send the club across the deck while a crew is in the vicinity. Its advantage is the ability to function as a vang of sorts, controlling the shape of the sail. When wung out, for example, the clew remains tensioned; without a club the jib would belly out.

Either way, a self-tacking jib is an energy saving convenience that seems to be growing in popularity. Indeed, we have also noticed an increasing number of older boats with retrofitted self-tending jibs, sometimes with clubs, sometimes without. If you don’t have to buy a new sail, it’s not a terribly expensive upgrade.

Here’s a look at some of the boats so equipped.