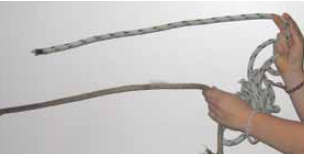 Practical Sailor followed manufacturer instructions for treating used lines, with one exception. Both the Granger’s and Rope Proof advise users to dry the treated ropes in a warm dryer after soaking them in the diluted solution and laundering them. As we’ve learned in past tests (PS, July 2011), most rope manufacturers caution against placing rope in a heated dryer, and cleaning them in a washing machine can be damaging (to the rope and the machine). So for this test, we opted to clean the test ropes by gently agitating them in a bucket by hand, rinsing them in a pillowcase on a shortened gentle cycle, and air drying them. (We did test one set of lines by air-drying and heat-setting, but there was no measurable difference.)

We learned that the treatment of lines can be a simple dockside task, since the lines need only 20 minutes to drip off, and they can be reinstalled while still damp.

Approximately 150 feet of 7/16-inch rope will fit in a five-gallon bucket. This requires one 500-milliliter bottle (17 ounces) of Rope Proof or 4 ounces of Granger’s—each had a different recommended treatment dosage. After treating a rope—particularly at the higher treatment rate recommended by Rope Proof—much of the treatment emulsion was still in the bucket. Testers treated four more ropes in the leftovers. (Waste not, want not.) Though the leftover treatment may have been somewhat less effective, it was enough to provide a water-repellent ability and freeze protection that withstood occasional use for eight months; we did not, however, test the ropes treated in the leftover emulsion.

Tests were carried out on one or more samples of each line, and the averages recorded. To find out whether the treatments reduced rope squeaking by replacing internal lubrication, testers applied the following treatments to running rigging on a 32-foot catamaran: starboard genoa sheet, fabric softener; port genoa sheet and mainsheet, Rope Proof; the working jib sheet was left untreated. All of these lines were in good condition before treatment, but they were five years old and starting to squeak while running when the wind picked up. The squeak test was carried out in 15- to 20-knots of breeze with sails close hauled. The treated lines were rated Pass (no squeaking detected) and Fail (audible squeaking detected).

To test treated lines’ resistance to freezing, 6-foot samples were cut from older polyester double-braid lines, soaked in a treatment (fabric softener, Granger’s, or Rope Proof) or water, and subjected to freezing temperatures. The treated samples were given Pass (did not freeze) or Fail (did freeze) ratings.

For the water weight-gain test, 6-foot samples of older polyester double-braid lines were weighed and treated (fabric softener, Granger’s, Rope Proof) per maker instructions (sans the heated drying). They were then soaked in water for 15 minutes, allowed to drip-dry for 2 minutes, and re-weighed. Other samples were exposed to an overnight rain, allowed to drip off for one hour, and re-weighed. It is noteworthy that soaking resulted in dramatically more weight gain than overnight rain exposure. However, our comments are generally directed toward the soaking results, as they were more definitive and more reflective of sailing hard in wet conditions.

Immediately after treatment, waterproofing treatments will reduce the surface friction of the line just a little bit, much as a new line is more slippery and runs more freely for the first few weeks before the coating rubs off. This generally requires a few extra line wraps around a winch until the slipperiness wears away. To determine whether the treated lines had reduced friction, we observed whether they required added turns on a winch after some use; the results were not significant. In the Value Guide, the number of turns on the winch required for adequate friction are listed.

Testers also observed whether the treatments had any effect on line soiling. While there was a slight reduction in mildew and algae growth after Granger’s and Rope Proof treatments, there was no noticeable difference in soiling. Testers noted that the treatments also had no effect on splices or knots.

Although we did not perform strength testing, field tests and research showed that when used at recommended levels, the treatments should not impact rope strength. At greatly exaggerated treatment levels, there could be a loss in strength, presumably because the rope never thoroughly dries.