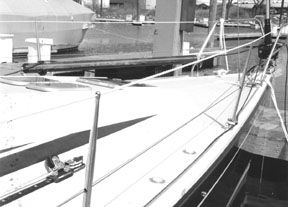 First, the obligatory horror stories: “Never use a winch on a furling headsail.”

That’s the view of Andrew Spiro, the veteran rigger at the Ship’s Store in Portsmouth, RI.

“If you have to use a winch to furl the headsail, something’s wrong,” Spiro told us, “and you’d better correct it before you tear up the pea patch. At the very least, you may wrap and jam the halyard.” To make his point, Spiro cited an incident in which the forestay twisted severely, resisting the pull on the furling line, so the boat owner went to low gear on his two-speed winch and the stay broke—bringing down the mast.

On the West Coast, the widely known rigger and author, Brion Toss, of Port Townsend, WA, concurred with that advice regarding winch usage with furling lines, but added: “There might be a rare exception—some condition of wind, water, and crew that would require using the winch, but trouble with furling generally means that the gear is not installed properly.”

A decade or two ago, jib furling gear often was said to be a bit of a pain, and horror stories circulated freely about singlehanders or couples entering harbors with the boat’s jib in tatters.

One afternoon in Bristol, RI, PS encountered a big Hinckley that had experienced a long, hard day coming about 75 miles from the Cape Cod Canal in heavy air with its genoa stuck in a position two thirds deployed. The boat owner and his son, taking turns in a boatswain’s chair, had been working since early morning with sharp knives and pliers trying to cut away the shredded remnants of an expensive headsail, which was bound tightly to the stay.

“It was a tough day,” the owner said. “We had a commitment to get here, so we just had to motor and keep going. The noise was very wearing.”

Furlers have improved immensely since then, and virtually all cruising boats—and many boats that are raced, especially by singlehanders—sport furling gear from long-established U.S. companies like Harken and Schaefer (both companies have been world innovators), and foreign brands like Furlex, Profurl, Facnor and Reckmann.

Toss expanded on his version of the “no winch” dictum by saying: “Furlers are interesting machines. Every one of the incremental parts must be just right. For instance, the first lead block from the furling drum should be at 90 degrees and as far from the drum as possible; a deck-mount block sometimes is the only way to achieve that. A ratcheting block on the other end is nice to have, too, especially if you’re shorthanded.” (PS reported in the May 1 issue this year on Harken’s new Carbo ratchets, both the switchable and automatic versions.)

Furling line fairleads are one of those very important increments mentioned by Toss. But they’re often given too little attention. The furling line itself doesn’t undergo much tensile stress, but it should be free of abrupt turns and run through leads as friction-free as possible. Unless the lead at a given point is almost in a straight line (in which case a plain bullseye fairlead will do), the fairlead should be able to articulate in one or more planes, depending on the installation, or, better still, have a swiveling-head universal joint.

There are many kinds of fairleads, which is what this report is about. Most boats need several fairleads for a single furling line. The cost for each one ranges from a few bucks to up around a hundred dollars—perhaps the widest price range of any type of gear you can put on a sailboat.

Even though they work fairly well on boats with wide decks, PS elected, for several reasons, to not deal with deck-mounted fairleads such as pad eye-mounted swivel blocks; stand-up blocks; upright blocks; pivoting lead blocks; half-moon blocks; cheek blocks or single-sheave organizers on teak wedges, etc. All such bits of hardware add unnecessary weight; can be noisy; require holes in the deck; are toe-stubbers and ankle-bangers, and—worst of all—infringe on clear access and egress along the sidedecks.

Unless you are one of those who accept unsightly deck clutter and annoying clatter as a sailing way of life, you’ll find stanchion-mounted fairleads make more sense. It’s important to get the furling line (it rolls underfoot) and fairleads off the deck, or at least close to the rail.

When a boat owner buys a furling system from Schaefer, he tends to use Schaefer fairleads, that are, like most Schaefer gear, very rugged stuff.

If the furler is from Harken, he probably uses Harken fairleads, which usually reflect Harken’s penchant for ball bearings. A lot of foreign furlers use Spinlock’s very clever WL/1 and WL/2 fairleads, which are unchanged from 1999, when they were introduced by this British company that specializes in line-holding equipment. The WL/2, with a sheave and “tracker ball angle adjustment,” goes for $27.The WL/1, with a plain bullseye, costs about $12. For contrast, Holt Allen makes a good little bullseye fairlead that Defender sells for about $5. Holt says its manufacturer’s suggested retail price is $9.70 in the U.S.

All of these fairleads work well, if properly installed. Of course, those with a sheave run easier than those with a simple bullseye, especially if the sheave has ball bearings or impregnated lubrication (like Antal’s modular web blocks made of high-strength composite plastic lubricated with “PTFE”).

Rather than waxing on about these important bits of hardware, it seems best, in this case, to simply illustrate them. A picture sometimes really is worth a thousand words; and one of these photos may give you an idea about how to improve the furling line arrangement on your boat.

Some of the fairleads are shown on stanchions with plain wire lifelines, some with the customary plastic-covered lifelines and some rigged with line.

(In the Nov. 1, 2002 issue, PS published a discussion about wire vs. lifelines made of rope such as Yale’s Aracom T, which has a Technora core and Dacron cover; New England Ropes’ T-900, which has a Technora-Spectra core and Dacron cover, or Samson’s Amsteel Blue, which is a 12-strand Dyneema braid with a UV-resistant coating. Because lifelines made of such line offer savings in cost and weight and are corrosion-free, easier to rig, and more comfortable, PS recommends their use.)

The Bottom Line
You may find that you’re restricted in what you can choose for that important pathway for the headsail furling line. The kind of stanchions you have may affect the decision. But if you want a free-running system, fairleads with sheaves equipped with bearings would be the choice.

The basic goals are fairleads that: 1. Line up exactly, whether fixed or articulating; 2. Run freely; 3. Are smooth and unobtrusive so that they pose no threat to toes and sheets, etc., and 4. Last a long time in the conditions to which you expose them.

If you’re sailing around the world, the stainless gear from Garhauer or Schaefer would be a wise choice. Choose either the new type that leads the line outside, or the old reliable stanchion clamps with stainless blocks attached. In either approach, the Garhauer equipment is the best buy due to its more economical pricing.

If sleek, smooth and minimal windage is called for, the Holt Allen and either of the Spinlock fairleads are most attractive. And the Holt Allen fairlead is surprisingly inexpensive.

But what if you’re looking for something in between? PS likes the Harken stanchion clamp, to which can be affixed a very small, effective block with a sheave that turns on bearings—as shown in the photo on the opposite page.

If something “techy” is irrestible for you, take a look at the photo at right. It shows how a Yale Loup, Harken Ti-Lite or Antal web block can be adapted to the task at hand.