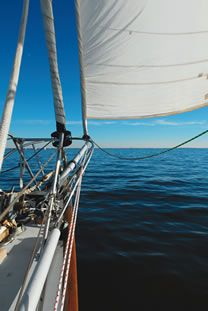 Today’s breed of well-engineered, conventional, slotted-luff headsail furlers affords a wonderful home for the compromise genoa—a 12- to 25-knot, easy to handle, 120-135 percent sail. The compromise genny is neither working jib nor light-air-optimized headsail—and the idea of making it a 4-ounce, 150-percent genoa defies both shape concerns and material constraints. The setup leaves many boat owners, in their quest to optimize power under sail, seeking a light-air solution.

One option is to simply drop the heavy, mid-sized genoa and replace it with either a light, 165-percent drifter or a heavy, working jib. Doing so—especially in a racing situation—without a dexterous crew can make piston-hanking sails seem the better option, and it also closes out some future choices. For example, once the heavy 135 is bagged and the 165 reacher has been wrestled into the slotted roller-furler foil, it’s probably time for the gusty 20-knot afternoon sea breeze to arrive. Overpowered with the new snoot full of wind, the large, fragile headsail must be furled, leaving the sloop rig one sail short.

In order to change back to a smaller, heavier headsail, the big light-air genny must be unfurled and peeled out of the luff groove—a process that redefines “mechanical friction” and “crew discontent.” It comes as no surprise that single-handed sailors often opt for three independent furlers to avoid just such sail-shuffling snafus.

Those who enjoy the time they spend under sail and are willing to invest in some aftermarket equipment to take better advantage of light-air sailing conditions (less than 10 knots) can avoid the sail-swapping hassle. Modern fractional-rig boats with a masthead halyard can supersize their light-air headsail response with a continuous-line furler, and owners of older, low wetted surface, masthead-rig sailboats will benefit just as much from them.

Many of the antique Cals, Rangers, Ericsons, and Pearsons sported narrow, light-air efficient, easily driven hull shapes, with fairly small sail plans. But when owners converted to a conventional extrusion-over-headstay roller furler, their compromise genoa was both heavier and smaller than an optimum light-air sail should be, and the trusty 165-percent, 2-ounce Dacron drifter/reacher was left in the basement along with the ability to enjoy a 7-knot breeze.

As we pointed out in our last review of foil-less furlers (PS, March 2008) and noted again in this test, all it takes is a sturdy stem projection or removable sprit and one of the new flying-sail furling systems for skippers to reincarnate the boost of the 165 drifter-reacher. An even better option lies in a whole host of more sophisticated code and reaching sails available from local sailmakers. These gennakers are ideally handled with a luff-line furling system like those in this test.

As with all large-area sails, there’s a need to recognize that modest increases in true wind velocity can add up to a large increase in energy generated by the sail. Boat motion in a seaway can also influence the load on the sail and rigging, and each crew needs to develop a set of guidelines regarding the wind velocity and point of sail in which the gear is used. Cruisers are usually shorthanded and will close down the show sooner than racers looking for a performance edge. By waiting too long, especially when the breeze is well forward of the beam, there’s a chance to blow out a light-air sail and perhaps even break the pole. The gear is not meant to “reef down” the light-air sail in heavier air, that’s the time to swap back to the genoa furled on the headstay.