Ever since lightweight ball bearing blocks were introduced they have been the standard anywhere a line needed to change direction. Tackles run smoother, and no maintenance is required, other than an occasional cleaning.

During the past decade or so, high molecular weight polyethylene (HMPE) line such as Dyneema (Amsteel) has become popular in racing boats, and along with it appeared magical low friction rings, finding application in many places where traditionally, ball bearing blocks were required. Blocks are more efficient (see Refining Furling Line Fairleads, October 2015), but they are also big, flop around on deck, and working loads are limited.

When tester Drew Frye recently downsized to a Corsair 24 trimaran in need some re-rigging and up-grades, the idea of using low-friction rings instead of blocks kept popping up. It became obvious that low friction rings offered considerable advantages in certain applications.

For example, Frye needed to add a barber hauler; in the past he had used ball bearing blocks, but he never liked the way they flopped around on deck-one more thing to trip over. The main outhaul needed some work, but space was tight and big blocks hanging down wouldnt do.

The fixed bobstay on the folding bowsprit was going to be replaced with an adjusting tackle. Ball bearing blocks plunging through waves were certain to clog with sticks and grit, and the loads are massive when the reacher is sheeted tight on a close reach. Blocks with a suitable load rating are big and pricey, and smaller blocks were too weak.

A low friction ring cascade rigged with Amsteel would be just the thing, here. Since it would not be adjusted under load, a little friction would mean nothing.

There are lots interesting possibilities, both for the racer shaving ounces and the cruiser in search of rugged simplicity.

Lightweight. For cruisers, its not so much about saving ounces as less gear banging around. Many cruisers have accepted soft shackles as a sensible alternative to metal shackles for sheet and sail attachment (see Going Soft on Shackles, April 2015). For the many of the same reasons that soft shackles drew our favor, we like the rings anywhere gear can bang around or get underfoot. Barber haulers, downhauls, and outhauls are excellent examples. Some other key advantages:

Inexpensive. Rings are at less than half the price of a comparable block-even more if high load.

Nothing to break. Modern ball bearing blocks are very reliable, but there are a lot of them on the typical cruising boat. There are also places were a failure could be devastating. Adjustment to standing rigging and bobstays come to mind.

Nothing to clog up. The rings have served well in the bobstay cascade. These blocks plow through the water for miles. A weed or stick is bound to find its way into the workings of a block. No bearings makes perfect sense here.

Inefficient. Although Teflon-coated and shaped to minimize friction, rings cant compete with ball bearing blocks in a multipart tackle. They really have no place in sheet tackles or other lines that are adjusted frequently through a wide range.

Splicing. They dont just clip on with a shackle. However, if mounted with a loop or soft shackle they can be quickly attached, and there is a splicing, sewing, or seizing trick to match every skill level.

Cascade vs. Conventional Tackle. Cascaded tackles have always been common for fine adjustments, in booms, vangs, and the standing rigging of dinghies. They reduce friction and the size and number of blocks, at the cost of reduced range of travel. A 4:1 cascade can only adjust through about 1/3 of the available end- to- end distance, and with higher purchases the range is further reduced.

We obtained samples from Antal, Harken, Ronstan, Scheafer, and Nautus. All make rings of a variety of sizes, as well as a few unusual products blending a number of approaches. This is a new area, so manufactures are still working to figure out how to apply it. Similar rings are available from Barton and Tylaska (not tested).

In the lab we measured the efficiency of the rings as pulleys by lifting a know weight with both polyester and Dyneema line, using both 2:1 purchase and 4:1 cascade tackles. In the 2:1 trials the polyester line was 3/8-inch and the Dyneema was -inch. In the 4:1 cascade tests both lines were 5 mm.

Although there were slight differences in appearance and finish, for a given size, the friction characteristics of all rings were quite similar, so we didnt test every one. A large size reduced friction, the reduction being very dependent on the size and stiffness of the rope. Results were averaged and some of the stiffest rope results were discarded as clearly unsuitable. The results are summarized in the adjacent table.

In the field we installed rings in a variety of applications, including barber haulers, bobstay tackle, fairleads, outhauls, and down hauls, living with them through a busy season. We also tested them as turning blocks during some backyard logging, moving massive oak logs with an electric winch to provide some good and proper abuse.

All of the products proved utterly reliable. The only ring that ever jumped out of its fixing was on a bungee cord; the eye stretched and the ring was pressed sideways by contact with a pad eye. The problem was solved by tightening the loop and switching to a high-sided Antal ring. Nautos rings also have deep grooves.

Although any rope that fits through the hole will work, any rigger will tell you that too-big lines through too-small blocks are a common riggers curse; the sailor increases the line size for better grip, but friction goes through the roof. The same is true with rings; a 10 mm line in a 14 mm ring can work for a barber hauler with a limited deflection angle, but as part of a vang tackle, 6 mm line in a 14 mm ring is more appropriate and will result in much less friction.

Likewise, a limp Dyneema single braid can bend far more easily than a stiff polyester double braid; we dont recommend rigging cascades with anything but Dyneema for this reason. It was obvious that the rings were less efficient than ball bearing blocks, but the testers agreed that the trade-off was worthwhile in the chosen applications.

Superbly finished with a nice deep groove and a lip to retain the fixing loop and the lowest friction, they worked perfectly everywhere we tried them.

Our first experience was with 14 mm Harken rings at the sheet end of our barber hauler, and they did not disappoint. Used to deflect the jib sheet, occasionally under high load and severe angles, they add more friction than a ball bearing block, but its not much of a negative, since the barber hauler is not under tension in our windward setting. Off the wind, a little friction hardly matters, and in light winds, it doesnt weight the sheets down.

Deep, square-bottomed groves make these the most secure when using webbing, nylon rope, or bungee cord, or in any situation where seizing the ring tightly is difficult. The trade off is strength; the groves were made wider by machining the rings a bit thinner. That said, they are still as strong as Dyneema line compatible with the ring size. Available in sizes ranging from 8-20 mm.

Bottom line: Recommended and our favorite for webbing and bungee cords.

Similar in dimensions and specs to Antal and Nautos rings, they are performing happily in a number of applications. They have the highest safe working load ratings for a given size.

The Shocks are easy to tie on to small control lines, making them more user-friendly in some applications

Bottom line: Not tested, but with similar dimensions and finish, they should work.

Tightly seized into loops, they served have served well as outhaul turning blocks and barber haulers. We did have one pop out of a bungee, but that was a tough application and we could have seized it tighter to allow for stretch. Really, this is not something rings are designed for, and yet we like the application, since chafe will always be a weakness of bungee materials.

Bottom Line: Good solid rings, thought we wish the sides of the grooves were a little higher.

Our testers also looked at a variety of devices that functioned like rings, but took a different shape. Some commonly used climbing hardware was included in this group.

A cross between a snatch block and a low friction ring, we tested this a number of places on the boat, including reacher and spinnaker turning blocks. The friction characteristics are the same as a low friction ring with the same dimensions. We also abused them as snatch blocks for some back yard logging; the loads were high, they ignored dirt and abuse, and proved light and darn handy.

Bottom line: Recommended anywhere a removable ring might work, such as a barber hauler or twing line.

Intended for reefing clews and applications where they will be tied rather than encircled, these employ the same approach, but with thicker material and a shorter radius.

Bottom line: We didnt have enough application practice to form an opinion.

We dislike these for many reasons, including their tendency to clip to lifelines and standing rigging when least desired. However, they are useful for testing ideas before rigging permanently and dang handy for jury rigs. We always keep a half dozen on-board. We were surprised that the friction was not that much higher than low friction rings, particularly with Dyneema.

The small radius and plain anodized finish resulted in slightly higher friction than low friction rings. On the other hand, they are simple to tie on a rope, dirt cheap, and numerous sailors reported being happy with them for barber haulers and lazyjacks on mid-sized boats.

Bottom line: Best Buy if you are on a budget.

Smooth and meant for the end of a rope, these have been used for lashings for generations. While the friction was slightly higher than low friction rings, they can be a budget solution for lazy jacks and lashings. Bottom line. A Best Buy for lashings and lazyjacks.

While not a replacement for ball bearing blocks, rings are probably the best choice for something on every boat. Next time you are rigging a small cascade, a rigging tweak, or something with huge loads, give low friction rings a look. 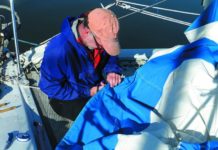 The Case of the Painted Jib 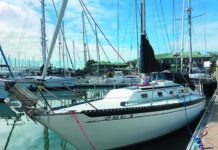 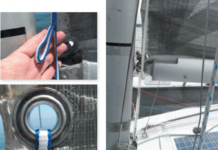