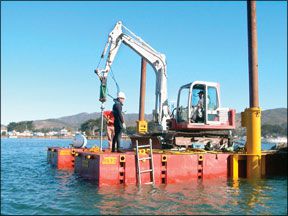 Practical Sailors home port of Sarasota, Fla., is becoming a test bed of sorts for mooring equipment. A contractor has begun work on a designated mooring field (Rhumb Lines, June 2009), while across the bay the Sarasota Sailing Squadron is working to reconfigure its existing mooring field to comply with the state and local laws.

A book could be written about the legal wranglings surrounding mooring fields, but what were interested in are the technical challenges of keeping the boats in one place. Ideally, the chosen mooring would also minimize harm to the sea bottom habitat.

In this article, the first in a series tracking the mooring gear selection and performance in Sarasota Bay, well look strictly at common anchoring options and their relative holding powers. Although this subject has been studied on many occasions and single-product holding power tests are common, actual comparisons between various types of mooring products are less typical.

The table at the top of page 19 displays results from two pull tests held 12 years apart. The first, in 1995, was carried out by the BoatUS Foundation for Boating Safety, the Massachusetts Institute of Technology Sea Grant College Program and Cruising World Magazine, using a tugboat to exert angled pulls. The second was carried out in the summer of 2007 by volunteers at the Sarasota Sailing Squadron using inflatable lift bags that exerted a vertical pull.

A key question when designing any mooring is what the designed load limits should be. In 2004, we examined the topic of anchoring and mooring loads and came to the conclusion that variables such as fetch, duration of the storm, etc. can quickly upset any formulas or pat conclusions. Ultimately, we consider the American Boat and Yacht Councils table of Ground Tackle Loads (see facing page) an acceptable guide for anticipated loads in a protected anchorage.

Once expected loads are determined, all the components in the mooring assembly should be sized accordingly, with an adequate safety factor. In a well-
engineered setup, the anchor itself is usually not the problem. Typically, the rode elements (including shackles and splices) or the attachment point on the boat are what fail. Chafe gear, shock absorbing rodes and/or snubbers, and well-reinforced deck fittings are essential.

Mooring anchors fall into two general categories: those that rely on sheer weight and mass to provide holding and embedment types that penetrate the sea floor. There are also some hybrids that rely mostly on their weight, but also embed themselves in the sea floor over time.

Concrete blocks (and similar large masses) are the most basic mooring anchors. Sized properly and with the right sea bottom (sticky mud) and a 4:1 scope, they usually are adequate, but reports of blocks dragging in storms are not uncommon. It is important to keep in mind that any weight-reliant anchor will lose weight in the water. Due to its buoyancy, concrete can be up to 45 percent lighter submerged; denser materials like iron only shed about 10 percent of their weight.

Mushrooms, typically made of iron, improve holding power with a cup-shaped cap that can sink into mud, presenting more resistance.

Dor-Mor inverted-pyramid-type anchors are designed to penetrate quicker and deeper than mushrooms, burying themselves into soft bottoms to increase holding power.

Two types of embedment anchors dominate the market, and both require professional installation to be reliable at high loads.

Screw anchors, like the Helix, consist of an 8- to 20-foot-long shaft with helical discs that screw into the bottom. They can be installed from a barge or by a diver. The shaft length and the number and diameter of the discs are increased for softer bottoms. Screw anchors are of limited use in granite shelf or soupy mud, although these bottoms will stymie any of the anchors profiled here.

Penetrating anchors such as the Manta Ray are driven into the sea bottom like giant harpoons. A hydraulic driver operated by a diver punches them into the bottom. Once the shaft is buried, a hydraulic “lock-down” device pulls upward on the anchor, and this opens the hinged plate barb at the tip of the shaft, embedding the anchor. The length of the shaft and size of the plate can be increased for softer bottoms. Unlike screw-type anchors, the Manta Ray cannot be unscrewed.

In both tests, the embedment-type anchors clearly showed greater holding power than those that relied mostly on weight and mass for resistance. The need for a diver and/or specialized equipment for proper installation, however, raises the price. They also suffer in soft mud. Another concern is that if the embedment anchor pulls out, there is no hope of it resetting itself or even slowing the boats drag. Both Helix and Manta say that anchors installed more than a decade ago are still going strong.

The Manta installation is a relatively compact underwater operation that disturbs only a very small area of sea bottom, making them popular in sensitive reef dive sites. The makers of the Manta also claim better holding power in loose soils like cobble stone or gravel, since no sea bottom is loosened as the anchor is embedded.

The screw devices like the Helix have a long history of proven success and sheer numbers to back them. Tens of thousands of helical screws from Maine-based Helix are in use. They can be found in 45 states and 25 countries. The Helixs unique top attachment arrangement-a collar that encircles the 1- inch thick shaft is extremely strong and directs the load at an angle to the shaft-further boosting the screws holding power. Being able to add discs to increase resistance is a plus.

Ultimately, either of these devices would suit the Sarasota projects. Both the city and the squadron have opted for Helix-type moorings. Core samples have revealed a rock layer 8-feet below the sand and clay bottom, which may limit the holding power of some sections of the mooring field.

Pull tests in the municipal field put the Helixs holding power at 18,000 pounds, far greater than the expected loads on a 40-foot boat in 60-knot winds. In the next segment, well look at the various options for rode, including some of the new elastic rodes. Shortening scope and reducing or eliminating chain offers the greatest promise for protecting seabeds.