In the time weve had our seven bits of mooring chain in the water-2 years-we could have gotten a masters degree. We could have had two kids, maybe three if we hurried. We could have paid, say, $100,000 in college tuition, put 30,000 miles on the family car, or watched 44,000 back-to-back episodes of “I Dream of Jeannie.”

Instead, we monitored and pondered the dissolution of steel chain, molecule by tedious molecule.

To recap, the seven 5-foot lengths went into Long Island Sound in November 2005. We reported the initial setup in the March 2006 issue, a first inspection in the September 2006 issue, and a one-year look in the July 2007 issue.

When last we left our links, they were twisted into what we called a chain skein and hung beneath a dock, weighed down by a cinder block and bobbed by a large Taylor-Made buoy. That lasted a month or so before wave action chafed through one of the suspension lines and dropped the cinderblock and buoy free, after which, they kindly floated ashore in equilibrium to a convenient spot. The chains were left hanging vertically like rusty tresses off one bollard.

It was just about that time that we received and published a letter from Dr. Charles F. Barth, a reader and metallurgist who cautioned us that having the chains twisted in contact with each other in the skein might produce skewed results.

So we went back to a variation on our first torture rack, lashing the chains individually between two cross-pieces. At dead low tide, we tied the two ends of the lower crosspiece between two dock bollards. We then suspended the upper crosspiece from the center of the dock, so that the chains hung with a fair amount of slack, tuning the slack with the lashings. We put the big Taylor Made close to the top crosspiece, so that as the tide rose and fell and the waves rolled in, there would be a lot of bobbing, increased tension, and random eccentric loads. Parts of the chains were exposed to air twice a day at low tide.

This setup was used for another three months. When we took the chains out in November 2007, we didnt see enough difference to make a new report. So back in the drink they went, this time dangling individually from the dock with bricks zip-tied to the bottom links. Again, the chains saw some air exposure at every low tide.

We pulled the chains for a final look in late April 2008. Final, because two to three years is about the longest any upper chain can be trusted, especially in the chain-hungry waters of Long Island Sound. (The upper, or top chain, is the smaller chain that is suspended in the water between the mooring ball and the heavier chain, which lies better protected on the bottom-in dense mud in this case.)

The upper chain is subject to constant wear (fretting) from the links chafing each other as the mooring ball bobs in the water, and as the boat tugs at the mooring in a breeze or current. It can also be compromised by galvanic corrosion. In this evaluation, probably all of the loss of material has come from a combination of simple, gradual fretting and oxidation (rust).

When we retrieved the chains this time, we found the greatest loss of material just below the halfway points in the 5-foot lengths. This part of each chain was subjected to both air and water during testing. It also saw more movement and fretting, and so it was here that we looked for the weakest link in each specimen. These turned out to be within a few links of each other. We put the weakest links on a cinderblock, hammered away the rust to get down to the bare steel structure, and measured at the thinnest points with a ruler and calipers.

There were no real surprises in the early inspections of this chain, so why expect any now? The deterioration has been straightforward, with no sudden losers or come-from-behind winners. The basic results are shown in the chart and accompanying photos.

Other Notes of Interest

* Most chain designated as “mooring” chain starts at 3/8-inch, but we used 5/16-inch chain in order to get faster results. The actual diameter of the link wire varied a bit. Both of the Campbell chains-plain and zinc-coated-had stated true diameters of 5/16 inch, just shy of 8 millimeters. The Chinese proof-coil was made to the same dimensions. Published specs from Acco and Suncor show slightly larger wire sizes, with original diameters from 0.32 to 0.34 inches, or a bit over 8 millimeters.

* The three Acco chains have shown good consistency throughout the test. In terms of material loss, the more expensive grade-40 high-test chain, rated for more than twice the safe working load (SWL) of the grade-30 chain, has fretted away at about the same rate as the standard proof coil. Since this test began, Acco was bought by the Peerless Chain Co., but seems to be still operating as before.

* When we began this test, Campbell did not make (or we failed to find) a marine grade-30 hot-galvanized proof coil in the 5/16-inch size we needed. The company does now make such a chain, and it comes in the shorter link length (pitch), with a slightly greater diameter (0.34 inch as opposed to 0.31 inch), similar to the Acco chains. It also makes a mooring chain, starting in 3/8 inch, of the same hot-galvanized, low-carbon steel, but with longer links to allow easy insertion of the right-sized shackle. Sight unseen, but based on the performance of the steel in this test, we would guess that the U.S.-made, marine-grade Campbell proof coil would be comparable to the Acco proof coil.

* As mentioned before, the Chinese-made generic grade-30 proof coil chain looked identical to the Campbell proof coil (made in York, Pa.) at the time of purchase, except for the stamp. We began to see some difference between them at the one-year point, and in our recent measurements found the difference more pronounced, with the weakest link in the Chinese chain down to 4 millimeters, as opposed to Campbells 5 millimeters. Its hard to know for certain whether this single millimeter indicates an inferior or compromised product, but given a choice between these two identical-looking chains, wed buy the one made in Penns woods.

* The Campbell shiny zinc-plated proof coil chain, which we bought at a local hardware store at the second-lowest price-per-foot of all seven chains, did surprisingly well, at least in terms of wear. Until it was eaten away, the zinc coating seemed to protect the steel underneath, which measured out on par with the three Acco products.

* Suncors 316L stainless steel chain showed no wear, just some rusty discoloration, which Dr. Barth wrote should not be a cause for concern. As mentioned in the July 2007 issue, the worry with stainless steel chain that lives in a low-oxygen underwater environment, going through work-hardening, is that it can look great right until it gives way without warning. Since weve put very little stress on these chains so far, and also exposed them repeatedly to the air, wed be surprised if the Suncor chain is hiding a secret, but well know better when we go to break it. We should also note that the Suncor chain is a BBB size-its meant to be used as deck-anchor rode, not permanent mooring chain.

Among these chains, wed still go for standard Acco grade-30 proof coil. Its the best all-around chain for the price. We would also consider Campbells marine-grade proof coil, if we found it at a similar price-per-foot as the Acco.

And just when you thought we were done with these chains…our curiosity has gotten the best of us and we want to know which one truly is the weakest link. So we plan to test the breaking strength of the links. Stay tuned for the report. 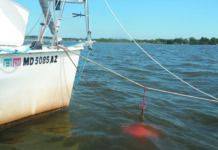 Other Methods to Control Yaw 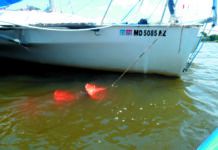