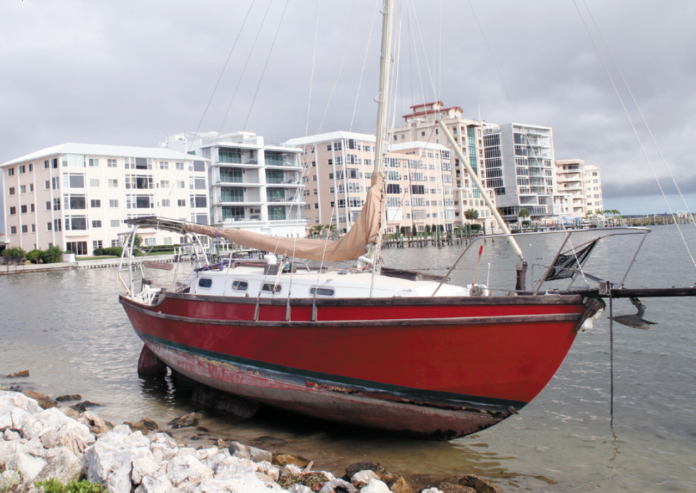 This months report on tandem anchoring rigs was on my mind as the winds began gusting above 30 knots in the Dry Tortugas. Wed stopped there to wait out the passing of a late-season cold front during our recent voyage from Sarasota, Fla., to Havana, Cuba, aboard a friends 42-foot Endeavor, Lost Boys.

Several other boats were also seeking shelter in the shallow, well-protected anchorage behind Bush Key. The holding ground behind the low-lying island-a mixture of carpet grass and sand-wasnt ideal, but we found a promising sandy spot for our 60-pound CQR on 3/8-inch chain, and I dove on it to check its set.

By late afternoon, as the gusty winds began building, we set a second anchor, a 45-pound Super Max, on 60 feet of 3/8-inch chain leader and 3/4-inch nylon rode. The two anchors were arranged in a 45-degree angle, facing toward the northeast, where the strongest winds were forecast to be.

Shortly after sunset, the first line-squall appeared, bringing waterspouts and low dark clouds. The fleet of nine boats, most on long, nylon rodes, began dancing around. One boat, a 60-foot commercial fishing boat that was anchored to windward of everyone, skated in wide arcs. Winds quickly jumped to 40 knots, and as darkness fell, our snug little anchorage converted to a scene of chaos.

The fishing boat began dragging rapidly down on the sailboats astern. Lost Boys was not directly in its line of drift, but as the fishing boat crew madly tried to recover its anchor, the boats erratic course was hard to follow. Two boats directly in its path began furiously adjusting their own anchors. Our nearest neighbors, in a 42-foot Hunter, who also had two anchors out, madly scrambled to get out of the boats way. The Hunter blasted its horn and turned on its spreader lights. I began planning our own escape, just in case.

The research in this months issue regarding tandem anchor systems is meant to shed light on the behavior of two anchors of various types and various arrangements, some of which are suggested by anchor designers. In some situations, two anchors can be better than one, and will give you greater peace of mind, but as our experiment showed, tandem anchor rigs can bring complications, and some of the rigs are of dubious advantage in soft bottoms.

In the real world, when you may have to quickly weigh anchor, adjust the rode, or maybe even leave your buoyed primary anchor behind, a reliable primary anchor-preferably one with all chain rode set in a bottom known for good holding-is always your best first defense. Once multiple anchors and soupy bottoms start entering the equation, the complications mount.

Our friends on the Hunter were unable to retrieve either anchor in time, but just as it seemed a collision was inevitable, the longliners diesel pushed it clear. Its deck lights still glared as it steamed out the channel, in search of another place to rest for the night.