It’s no secret that any product stamped “marine” likely will be more expensive than its counterpart in a different market. In some cases, we’ve found, that crossover gear serves us just as well as “marine” gear, but it can be had at a better price. There obviously are exceptions, but we’re always on the lookout for crossover products that can be used in lieu of pricey marine gear.

In this “Ocean Tested” report, PS contributor Drew Frye, an avid sailor and rock climber, makes the case for using recreational climbing gear in marine applications. He’s had over 20 years of experience with the climbing products described below in all sorts of marine applications.

NOTE: While this recreational gear is certified to perform reliably in its intended environment, it is possible to overstress the gear by using it in ways it was not designed for. Also, gear that is to be used for climbing or other safety-critical applications should be used only for that purpose.

From rock faces to heeling decks

Like sailors, rock climbers and mountaineers demand a lot from their gear. It must be strong, dependable, versatile, simple, and light. Because the cost of gear failure is often death, standards development is advanced and quality control is strict. And because the climbing gear market is significantly larger than the marine gear market, the pricing is dramatically lower—often two to five times cheaper than equivalent marine gear.

Also, climbers use the same gear over and over again, but in different combinations. It is designed to be versatile, so that a climber can piece together a rigging solution with what he has—and do it with one hand quickly. While there are marine alternatives that offer better durability for permanent installations, there are few alternatives that can offer the same combination of speed, versatility, strength, reliability, and economy.

The test standards for rock climbing equipment, as set by the International Mountaineering and Climbing Federation (www.theUIAA.org), are based on the energy generated by a “standard” falling climber, 5,000-6,000 pounds of load. The Occupational Safety and Health Administration (OSHA) and sailing safety gear standards are often based on UIAA work, and so generally have similar load limits.

About 20 years ago, the rock-climbing industry realized that wire-gated carabiners had substantial advantages over conventional carabiners. Because of their simple construction, they are not prone to corrosion or jamming with grit. The gate is also very light and does not flutter open when slapped against a cliff in the course of a fall. Marine chandleries are now filled with stainless-steel look-alikes of the aluminum carabiners. However, the strength and corrosion resistance promised by stainless steel doesn’t deliver much real advantage in most on-deck applications, and the weight and cost of stainless is many times greater.

While we would not advise using a climbing carabiner in place of marine-rated hardware on safety tethers, harnesses, or halyards, we have found multiple other onboard uses for them: lifting the tender on davits; lifting an outboard from the dinghy to the stern rail; re-directing mooring lines to avoid chafe; setting up boom preventers and other temporary rigging. We’ve also found they are much easier to use than fiddling with shackles while leaning over the rail in a lumpy sea. However, using any non-locking carabiner as a halyard shackle is bad; they have a nasty tendency to clip onto the lazy jacks and standing rigging, which leads to much swearing.

All climbing carabiners are tested to 50-percent of rated strength, and most are tested to destruction. With proper care, the aluminum carabiners have good corrosion resistance—just don’t expect a long service life if they are continuously in salt water. They should be rinsed with fresh water after use and stored ashore or in a dry box.

The gate action on climbing carabiners is super smooth—climbers, clinging to the smallest of holds, have no use for carabiners that won’t clip on easily every time, nor one that unclips too easily. Lightweight aluminum carabiners—weighing 27 grams versus 136 grams for stainless—also have less potential for chipping gelcoat. In 20 years of using them onboard, I’ve never had a wire-gate climbing carabiner fail.

Carabiners can be subject to abrasion, if worked long and hard against a burred steel fitting, but they are hardly fragile, and when ease of use and economy are factored in, wire-gate climbing carabiners are often the better choice. This is not so true of conventional solid-gate carabiners, which are prone to seizing when salt dries in the hinge. However, one locking solid-gate aluminum climbing carabiner, the Kong Tango, has made its way to the marine market and is found on West Marine’s newest tethers made to International Sailing Federation (ISAF) specifications. Practical Sailor testers gave the tethers top marks (PS, May 2009 and September 2011), but tests revealed the Kong Tango has some corrosion susceptibility, so rinsing the clips with fresh water and lubricating them with waterproof grease is advised.

Look for carabiners with anodized coatings, which will greatly reduce corrosion. Black Diamond (www.blackdiamondequipment.com) and Omega Pacific (www.omegapac.com) are quality brands, and prices start at about $7.

We’ve all seen the pictures: a rock climber working his way up a cliff, with all manner of gear slung over his shoulder and distributed on his harness. The staple of this rack is the runner, a tied or sewn webbing sling measuring 24 to 48 inches in length and rated to handle more than 5,000 pounds of load.

The potential onboard uses for a climbing sling—a strong link requiring little time or effort to place, with minimal bulk and without knots—are many. Some sailing gear makers have begun using slings and “loops” in place of harness and tether shackles to save weight. However, the climbing equivalent is cheaper, and perhaps more versatile. We’ve used them for rigging blocks, as a forward genoa lead, or as a spinnaker sheet twing for an asymmetrical chute. A sling and carabineer can redirect a dock line for reduced chafe. In combination with carabiners and rescue pulleys, simple tackles can be rigged in moments. They also have serve well as dinghy hoisting slings.

The added benefits of using a sling are that there are no knots to deal with, their low-profile stitching makes for easy handling, and many lengths are available, from 4 to 48 inches.

Need a strong and dependable attachment point? If you have an accessible single 3/8-inch bolt on deck, then look no further than the bolt hanger. On the sheer granite faces of Yosemite, thousands of feet above the valley floor, climbers secure these to wedge bolts drilled into the rock and trust them to catch epic falls.

Rated at 5,400 pounds in shear and available in stainless steel, these are secured by a single 3/8-inch bolt and will accept two carabiners or a shackle up to 3/8-inch. Direct lashing is not recommended for critical applications.

Onboard, we’ve used these for lashing deck cargo and rigging running gear. They have served us well for attaching swivel blocks to the end of a genoa track, extending the track without drilling holes. They’ve also allowed us to add blocks at stanchion bases, the mast base, and toerail. No one likes drilling holes in their boat, and these can save a lot of angst, particularly for temporary modifications or testing ideas. You can give a theory a test drive before drilling, sealing, and bedding fittings. But remember that they are only as strong as the bolt and backing plate.

Note that if the available bolt is smaller than 3/8-inch, some strength is sacrificed; however, in most cases, the existing hole can be drilled to accept a 3/8-inch bolt and the penetration re-bedded. Make sure the backing is sufficient.

Caveat: We do not recommend using bolt hangers as anchors for jackline webbing or to provide a tether attachment point. Bolt hangers are intended to swivel to meet the load, which is usually down in rock climbing; a tether anchor can be loaded in any direction.

Acme Climbing (www.acmeclimbing.com) and Metolius (www.metoliusclimbing.com) both offer stainless bolt hangers, which cost about $2-$3 each.

The climber’s rescue pulley is a simple pulley comprising a sheave and two side plates that swivel to open but are locked together with a carabiner when in use. It is simple, light, and strong, making it a good fit for odd onboard lifting tasks like raising a dinghy outboard, an engine from a well, or a tender up on deck.

Both Black Diamond and CMI Gear (www.cmi-gear.com) make quality rescue pulleys priced about $20-$40—a big savings over a $100-$400 snatch block.

MOB Tackle: Putting it All Together

Though every boat is different, testers found that climbing hardware—basically purpose-built rescue equipment—can be put together as a very compact, fast, and simple solution for man-overboard tackle. It’s quicker to rig than to describe and is compact enough to live in a cockpit pouch. For example:

• Clip a carabiner to the boom end, using a sling if needed, or a spinnaker halyard. Tie a figure-8 on-a-bight on the end of the halyard and clip on a carabiner; do not use the shackle.

• Tie a figure-8 on-a-bight in the working end of the spinnaker sheet (leave long tail), and clip a wire-gate carabiner to the end. The spinnaker sheet is always available during pick-up, has a dedicated winch, and the turning block is near the cockpit.

• Load the working part of the sheet into a rescue pulley and clip it to the boom-end carabiner (or the halyard).

• Clip the end of the halyard to the MOB—who has been pulled to the boat with a Lifesling—and grind. When he gets hip-high to the deck, pull him through the side or stern gate opening. 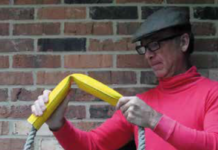 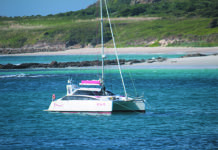 A Snubber & Hook for all Occasions 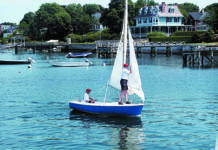