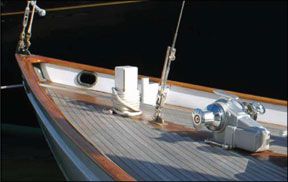 On average, a sailboat thats used 60 times a year actually spends only about 6 percent of its annual cycle underway. During the rest of the time, its either tied up, moored, anchored, or hauled out for maintenance, and when tallied up, this time can total as much as 94 percent of the year. That means that cleats (and docklines), rather than the person at the helm, will likely be in control of your sailboats destiny when the worst squall lines and cold fronts batter the fleet.

From this data, we can draw two important conclusions. The first is that we all need to spend more time underway, and the second underscores the importance of the cleat as an elegantly simple, yet most essential piece of hardware.

For centuries, timber-built craft relied upon one or two parallel vertical posts, often call “bitts,” that passed through the deck after being fastened to the keelson, floor frames, and deck beams. Lines were secured to these “Samson posts,” a nickname that alluded to pillars that only Samson was able to tear down. The trend to secure these line-handling bitts to major structural components of the vessel was based upon function rather than fashion, and it stemmed from the huge tension loads that could be imparted by docklines, tow warps, and anchor rodes. Bitts, along with the spoon-bow sloops and schooners that sported them, have all but disappeared from the waterfront, but the need for secure points to attach the cleats that usurped the role of the Samson post are as important as ever.

The concept of a cleat as a securing mechanism goes back to the 1400s, when antecedents to modern horn-type belaying cleats began to arrive on the scene. Eventually iron and bronze cast renditions were bolted to timber deck planking that incorporated additional under-deck reinforcement and load-spreading backing blocks. Today, in a era of stiff, light, foam-core decks, theres a need to carefully consider how energy is dissipated around cleat attachment points. For one thing, higher-density “infills” are necessary in regions where bolts secure a cleat to a cored deck. Some builders avoid this extra effort by placing cleats near the toerail, where the core is eliminated and the two fiber re-inforced plastic (FRP) skins of the deck have been brought together. This can be an adequate approach as long the laminate is thick enough or backed with a reinforcing (load-spreading) plate or extra units of FRP, and shoulder washers are used.

In addition to the structural issues involved, there are concerns over line leads and the need to make cleat use as safe and efficient as possible. Its easy to lose sight of how much energy a cleat must handle. In addition to steady-state line loads (normally in shear), there are a variety of angle and load oscillations associated with surging line loads. Fluctuations in the intensity can be linked to tidal rise and fall, along with force multipliers such as gusts and boat wakes.

Seiching, for example, is a low-frequency sloshing akin to what happens in a bowl of soup thats held in shaky hands. The net effect of such outside forces is to accelerate a tied-up vessel, adding a tension oscillation to the docklines or anchor rode. In many West Coast harbors, submarine canyons enhance this large-scale undulation, and seiching can greatly increase the wear and tear on both lines and cleats.

Cleats are the lynchpin in keeping a vessel where it belongs when conditions deteriorate. Recognizing their importance, we sent Practical Sailor Technical Editor Ralph Naranjo to the recent Annapolis and Miami boat shows on a mission to scrutinize the amount of attention designers, builders, and brokers have been placing on these crucial components. On his checklist were bullet points such as hardware positioning, fastening means, and most importantly, how the cleat handled the job at hand. He also looked to see whether the cleats (and chocks when used) were large enough to accommodate appropriate sized lines and anti-chafe gear. And finally, if a storm was in the forecast, how would the “doubling up” of docklines be handled?

These cleat-focused show visits revealed more than we initially anticipated: They highlighted that in many cases, a seafaring tradition lives on, and hardware and securing methodology were sound enough to do the job. In a few cases, such as with the “flip-up” horn cleats found of the luxury line of Oyster Yachts, there were true design innovations. But we also noted that some of the other hide-away cleat designs had to cope with water drainage and less-than-robust support structure, compromises that may not pay off in the long run. Even worse, some designers and builders seem to have dubbed cleats pass, substituting hard points such a rings and eyes as alternatives for line attachment. A few builders seemed to be placing cleats wherever they could find room to stick them. And in some cases, this meant on the transom rather than the deck itself. The result was a new set of point loads on the hull skin, plus a very awkward perch for line-handlers. This lackadaisical approach to cleat placement and the growing trend in the race-boat fraternity toward eliminating “cleat clutter” altogether, occasionally resulted in docklines being tied to pulpit stanchions, chainplates, and even stays and shrouds!

It seemed that less and less concern was given to the ergonomics of handling a line on a cleat. Its understandable that a foredeck crew in the midst of a spinnaker peel doesn’t want obstructions in the middle of their “court,” especially ones with lethal horns eager to snag a lazy guy or sheet. But from the opposite point of view, a crew adjusting docklines in a rough, gale-swept harbor needs easy access to securely mounted hardware.

A growing concern is that many manufacturers seem more concerned with how cleats and chocks look, rather than how they work. The most important consideration is whether or not a deck cleat carrying a full load can be handled without potentially sacrificing fingers.

Sheet-handling cleats in the cockpit belay lines that have been load dampened via turns around a winch drum. Just the opposite is true with a deck cleat. The energy contained in a stretching bow or spring line goes directly to a cleat. The load in the line is only slightly abated by a partial or full turn around the cleat, and when a crew member has a line in “hand,” good cleat placement allows a quick wrap to be taken without any appendages having to be placed in harms way.

Our boat-show foredeck roundup revealed a wide array of cleat/chock designs, and an even wider variation in how crews made up docklines and secured their prized possessions at center stage of these in-the-water events. Some boats, like the elegantly designed and artfully built mega-daysailer, the Friendship 53, featured cleats and chocks that kept with the theme of vessel-adding to the overall function and aesthetic appeal. The low-profile chocks and dropped-to-deck-level cleats handled braided docklines efficiently. The brokerage crew understood what they had in line-handling capability and displayed it well. With bow, stern, and double springs set, a crew could go home knowing that their sloop was securely tied to the dock. However, if storm warnings are posted, theres neither room for anti-chafe gear or room to double-up the lines.

Well over half of the boats tied up at the 2009 Annapolis and Miami boat shows displayed misled lines, foul leads, incomprehensible cleat hitches, and their brokers either ignored or were unaware of the glaring lapse in seamanship. One of the welcome exceptions to the rule belonged to Don Backe and members of Chesapeake Region Accessible Boating (CRAB), a sailing club for developmentally challenged individuals. The CRAB crew had several of their training boats on display (see photo on page 2), and despite the tight cramped confines, their lines ran fair, and anti-chafe gear had been used appropriately. Not one line was snaked back and forth like a cats cradle. Cleat hitches were properly made-in short, they displayed a fine example of good seamanship.

Line disarray was often more than just a hint about the priority given to cleats. In some cases, it was just the tip of a construction-shortfall iceberg. On several vessels festooned with floral arrangements, bowls of fruit, bottles of wine, and cute pillows, the cleats were jammed too close to the toerail, making line-handling difficult and fair leads all but impossible to attain. In the anchor lockers, we discovered little or no sign of extra reinforcement where the nuts and washers associated with cleat attachment came through the under deck. A few builders even preferred to bury aluminum plates in the laminate in order to provide reinforcement, a bad practice that, among other things, invites poultice corrosion.