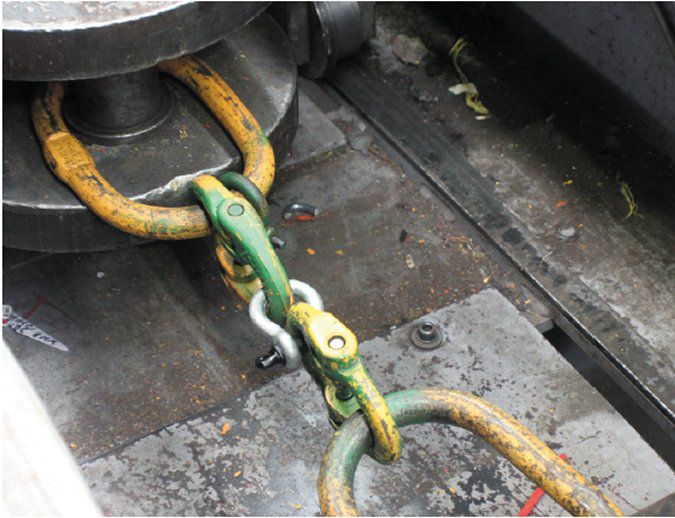 All testing was carried out at an approved test facility in Newcastle, Australia: J.L. Robertsons, which is adjacent to one of Australias large coal-mining areas. The test rig is used to certify lifting components for the local mining industry on a daily basis. The facility can test up to 95 tons, far more than we require. This is the same facility where we tested all of our anchor chains. (See PS June 2014, November 2014, January 2015, and March 2015 online.)

The rig is fairly simple. A ram loads the components, and a load cell tracks the increasing load versus deformation. One of each shackle was tested in exactly the same way, one after the other. Testing just one unit, as we did, is of limited statistical value, but we will be testing more units in the future.

Two notes about safety factors and ratings. A safety factor, as we described in our previous study of chains (see PS June 2014 online), is the ratio between what would be considered the safe working load limit (SWL or WLL) and the minimum tensile stress (MTS), also called minimum break stress (MBS). MTS is the minimum point at which a shackle or link can be expected to fail. It is mathematically derived, based on the type of steel and structural dimensions; WLL is a fraction of MTS. Ultimate tensile strength (UTS) is the breaking point based on actual data, and manufacturers are supposed to batch test to ensure UTS is higher than MTS. Finally, there is proof test, which is two times the working load limit and should result in no deformation. Crosby, Campbell, and Peerless proof test every shackle they make.

When assembling an anchor rode, use the working load limits for matching shackles and chain, but be aware of the different safety factor being applied. The safety factors for the shackles we tested range from 4.5:1 to 6:1; so a shackle with a slightly lower working load limit might actually be the stronger one. To further confuse the issue, some shackles are rated in metric tons, others in imperial or short tons-even when the sizes are advertised in inches.