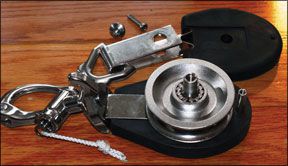 In our August 2007 issue, testers evaluated six snatch blocks currently on the market: the Antal 9060, Garhauer 60SN (Budget Buy), Harken 1609 (Best Choice), Lewmar SZ2 (Recommended), Schaefer 11-99, and Wichard 34500. Missing from the lineup were products from Ronstan, which offers a wide range of functional snatch blocks with interesting features that set them apart from the crowd. So, as a follow-up to the 2007 test, we took a close look at the Ronstan line of latching blocks.

One of our favorites was the all-stainless-steel, heavy-duty RF-6751, a block that sports an investment-cast stainless-steel sheave, a heavy-duty latch, and side plates covered with thick, thermoplastic rubber cheeks. This block is the latest evolution of the Nicro Marine gear that has stood the test of time. One of the notable changes Ronstan made is the switch from bronze to stainless-steel sheaves, which run on stainless-steel roller bearings. The slow turning rate and massive support eliminate the galling often associated with stainless-to-stainless contact.

All that stainless comes with a price: weight. The 6751 weighs in at 52.2 ounces, making it the big daddy of the Ronstan line and heavier than all of the blocks we tested last year. It also is the most expensive of the blocks.

This is an ideal block to have on board a cruiser, even if there’s no plan to hoist a spinnaker. Its ruggedness and user-friendly latching function make it just the right block to use for kedging. Much more pulling power is derived by using a smooth-rolling snatch block than a high-friction hawse hole or chock to fairlead the anchor rode.

Another of the Ronstan range that impressed testers was the RF-6831 with a cam lock and trunnion head. It was built around a 316 stainless-steel frame with an anodized-aluminum sheave and tough PVC cheeks. The cam-lock feature assures that when the block has been properly closed, it will remain that way until both the cam and the latch are undone. This double locking process is a simple one-handed operation. Testers prefer trunnion-type snap shackles. The extra articulation keeps the block from being damaged if the snap shackle gets hung up.

Although it has a comparatively small sheave diameter (1.75 inches), the RF-6831 can handle loads up to 3,310 pounds, which is on par with the other test blocks. Though not the most friction-free block on the block, the 6831 is representative of Ronstan’s alloy-sheave blocks with its high-quality construction, mid-range cost, and average safe working load.

Both the 6831 and 6751 stood out as rugged and serviceable blocks, well-suited for cruising sailors. But our favorite overall snatch block remains the Harken 1609. A top performer in bench tests, the Harken is user-friendly and easy to maintain.