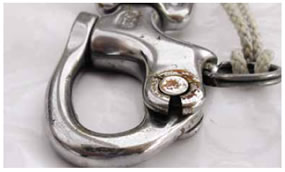 When it comes to stainless steel, nothing seems more baffling than the latest array of alloys that have migrated into the marine market. Not so long ago, stainless steel was referred to as 302, 304, and 316. These differing grades of stainless varied according to chrome and nickel content and the corrosion resistance they afforded.

During the time that these three alloys ruled the waterfront, a piece of hardwares proclivity to develop brown stain was a quick and easy means of distinction between the two lower grades and more costly 316. A quick test with a magnet could also confirm your assumptions. Weldable 316L alloy was the gold standard; nonmagnetic and the least likely to corrode, it endured use above as well as below the waterline.

These three grades of stainless steel are known as austenitic stainless, a term relating the metals cubic crystalline structure. Lower-grade 302 and 304 stainless was used when minor amounts of staining was tolerable and when hardware was used above the waterline. As the quest for lighter and stronger hardware became the status quo, stainless steel was looked upon as more than a moderately strong, perpetually shiny, rust-resistant material. Additional mechanical qualities such as higher tensile strength and improved isotropic characteristics (ability to cope with loads on several different planes) became very important. Unfortunately, austenitic stainless can’t be heat-treated to raise its tensile strength.

Martensitic stainless steel contains carbon and is able to be heat-treated, tempered, and hardened. The toughened stainless is characterized by a tetragonal crystalline structure and a magnetic signature. Many of these Martensitic stainless-steel products are similar to 410 type stainless, which has a 12 percent chromium content and the introduction of a small amount of carbon that helps improve yield strength. In precipitation-hardened PH stainless steel, the long-term addition of heat, sometimes called aging, causes the metal to develop intentionally inserted impurities in the crystal lattice structure, which keeps this structural backbone from prematurely collapsing under higher loads. Along with increased breaking strength comes a more corrosion-prone metal similar in its corrosion characteristics to 304 stainless steel. Hardware manufacturers go to great lengths to develop surfaces on precipitation hardened (PH) stainless steel that mitigates this tendency to corrode, and this is accomplished through post-casting processing.

In order to cope with this new demand for a high-strength, corrosion-resistant alloy, two types of Martensitic stainless steel have come into widespread favor: PH 15-5 and PH 17-4. Both have good corrosion resistance, but not on a par with 316 stainless-steel alloy. However, they have a much higher yield strength and deliver impressive safe working load ratings. The metal can be machined, forge welded, and investment cast. Its commercially available in rolled and flat stock, and is manufactured around the world. There are significan’t variations in quality and stock. Samples from the U.S., Western Europe, and Japan tend to be of higher quality than equivalent grades of stainless steel made elsewhere in Asia. Much of the success of this material lies in the quality control during the initial manufacturing process. A look at whats involved in the investment-cast parts manufacturing process details why each step along the way is such a critical link. Many hardware manufacturers subcontract an independent foundry to cast the key components. Strict adherence to specific alloy ingredients is essential and the addition of impurities can set the stage for failure.

When the raw castings arrive at the hardware manufacturing facility, the first step is often to tumble them in a heavy-duty drum to remove scale, slag, and other foundry debris from the surface. This is followed by a hot alkaline wash and then a freshwater flush. The next step is to electro polish the parts, which is actually a reverse plating process. It involves submerging the castings in an electrostatic bath with a combination of heated sulfuric and phosphoric acid-the goal of the short-term immersion is to make part act as an anode (instead of like a cathode in the plating process). This sacrificial role causes surface imperfections to be shed as chromium and nickel concentrate at the surface where they will oxidize in a beneficial process known as passivation. Another round of cleansing in multiple baths is followed by heat drying. Some manufacturers follow with an interim acid bath to dissolve any salt residue left behind, and finally, each part is mechanically buffed with an abrasive compound.

In each of these steps, theres a chance that all of the ferrous surface contamination is not removed and whatever is left lurking can be a source of staining, pitting, or even worse, crevice corrosion. Often its not the original alloy that causes the problem, but its the ferrous metal contaminants introduced in the finishing process that can spoil a batch of material. Theres also a big difference between slight cosmetic staining, and much deeper, more pervasive ferrous metal contamination that will lead to structural flaws sooner rather than later.

Not to be rolled over by the martensitic movement, austenitic advocates have Nitroic 50 and siblings like Aquamet 22-part of whats known as superaustenitic metallurgy-these hybrids put high chromium and nickel alloy percentages to good use, but also incorporate small amounts of manganese, nitrogen, and molybdenum to chemically leverage higher yield-strength and superior corrosion resistance. Nitronic 50 has nearly three times the yield strength of 316 and excellent corrosion resistance, and thats why its a premier choice for Navtec standing rigging. Aquamet 22 (22 percent chromium/ 12 percent nickel) remains the top end choice for prop shafts.