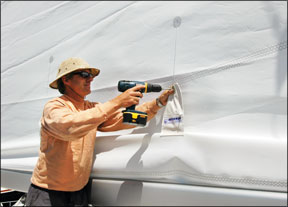 The mainsail continues to be both the heart of most sailplans, and the bane of many short-handed cruising sailors. In its modern bigger-than-ever context, the sail’s overpowering presence can be so daunting to a couple that they daysail their boat with only the jib unfurled. Others spend tens of thousands of dollars to automate mainsail handling—winding it up in a specially designed mast or boom. In addition to being a costly option, these in-spar and in-boom furling systems add more weight and more complexity to the boat’s sailplan, while at the same time, decreasing the efficiency of the sailplan itself. On larger boats, such trade-offs can make sense because the mainsail becomes so large and unwieldy. But for boats in the mid-range, 30 to 45 feet, there are less costly and more sailing-friendly alternatives to wrestling with an uncooperative mainsail.

Market analysis has shown that boatbuyers are indeed looking for bigger boats, and modern rigs that sport larger mainsails than ever before. This trend toward putting more sail area in the mainsail means that one jib can serve a larger wind range, which is most definitely a good thing. But the flip side of this bonus means that handling the larger, heavier mainsail becomes more of a chore, and there are several tasks that must be accomplished in a timely manner. Setting and dousing the sail are the most frequent rituals, but unanticipated reefing and the dreaded thunderstorm-induced fire drill seem to generate the most anxiety.

The best way to get a grip on the situation depends on the skill, number, and agility of the crew. Racing crews and young, fit cruisers lean toward the equivalent of manual “stick shift” transmission on a car—preferring the simplicity of a mainsail equipped only with a halyard, topping lift (or rigid vang support) and slab reefing with no other form of setting or flaking aid. This is the lightest, fastest, least complicated mainsail arrangement, and it maximizes performance when the sail is hoisted and the vessel and crew are happily underway. However, when it comes time to reef, or douse the sail, this configuration can take on the demeanor of a clothesline-hung bedsheet in a gale. Barring significant intervention from the crew, the breeze decides where the leech of the sail will go once the halyard is released, and mainsail reefing and flaking can become a substantial chore.

Lazy jacks, cover/lazy jack combos, and the innovative Dutchman systems have grown in popularity in recent years, offering a more practical, affordable advantage in the battle to tame the main. For a 35-foot boat, prices range from about $250 for a lazy jack kit, $700 for the Dutchman, to anywhere from $800 to $1,500 (not including sail costs) for a lazy jack/sailcover combo. A close comparison of each of these options will provide some valuable insight into taking the gymnastics out of handling a mainsail.

For centuries, sailors have appreciated the value of lazy jacks, a set of lines that act as a sail-gathering guide, catching and coaxing the mainsail into a stack on top of the boom. When the halyard is released, the sail falls in submission on top of the boom as if guided by an invisible hand—at least that how it’s supposed to work when all goes according to plan. And when lazy jacks are properly set up and a few simple guidelines are followed, they are as much a friend to a modern sailor as they were to the short-handed schoonermen who coasted New England. However, in other situations, lazy jacks can snag a batten tip of a sail being hoisted, or on a dark night, a loose lazy jack can even snag a spreader tip just before the crew jibes onto a new tack, resulting in a very different outlook toward the system. In short, this double set of lines is put to use infrequently during a sail, but is permanently carried along for the ride.

It’s essential that the crew develop a routine for setting and unsetting the “jacks” in order to minimize sail chafe and eliminate and chance that a spreader or any other protrusion is snagged. It’s also crucial to keep the boat head-to-wind or at least have the boom in line with the wind when hoisting sail, and—to a lesser extent—when dousing sail.

Some sailmakers offer a mainsail cover that’s attached to both the boom or sail and a set of lazy jacks. When the halyard is released, not only does mainsail drop to the boom, but it ends up in a cozy hammock-like cover and is just a zipper pull away from being completely stowed. This cover/lazy jack combination goes by several names depending on the sailmaker who builds it. One of the early innovators was Doyle Sailmakers with its StackPack—a combo full-batten main, lazy jack, and Sunbrella sail cover. The lazy jacks are fastened 50- to 75-percent of the way up the spar, and the StackPack is sewn directly to the sail. North Sail’s QuickCover attaches to the boom track but functions like the StackPack. Mack Sail’s Mack Pack fastens to the boom at intervals. Other sailmakers offer slightly different renditions of the cover/lazy-jack combo. All take the sail cover as well as the lazy-jack line system along for the ride.

Naturally, in our world of “no free lunch,” there are always some strings attached, and in this case it’s the lazy jack lines themselves, along with the Sunbrella or other acrylic cover that’s part of the package. In some designs, the “jacks” are kept fairly taught and the cover is raised, while in other designs, the lazy jacks can be slacked and the cover is secured to the boom sides. Once a crew gets the feel for how these additions to the sailplan behave, they become less of an inconvenience.

In our testing, we found that the Dutchman system simplifies the lazy jack concept. However, it does mandate some additional sail work and minor rigging additions, but the cost-to-benefit seems a bargain. At the heart of the system are three or four light lines clamped to the topping lift that drop vertically through fairleads in the sail to small tabs along its foot, just above the boom. The mainsail is set up with a series of grommets that allow these lines to be laced through the sail, and when a mainsail has been properly trained to fold along its creases, it simply slides from full hoist to the boom.

The system’s simplicity and functional design utilizes monofilament lines (some owners prefer Dacron) that are all but invisible, and the topping lift that they are attached to is already present on many sailboats. Aboard boats with a rigid vang or high-tech hydraulic vang, a topping lift still can be easily rigged to provide attachment for the Dutchman lines. The best bet is to set up the topping lift to function like a conventional halyard rather than a permanently fixed line near the masthead. One advantage of an adjustable topping lift is that should a mainsail halyard shackle get jammed in the topping lift, you can usually free the shackle by slackening the topping lift.

Once the sail has been lowered, both lazy jacks and the Dutchman system add a bit of complication to snapping a sail cover in place. In the case of the Dutchman system, covering up usually involves a series of small secondary zippers that accommodate the vertical monofilament lines. The traditional lazy jack system may only need to be eased a little in order to put on a conventional sail cover. Unfortunately, lazy jacks can also complicate mainsail hoisting by trapping batten tips as the sail gently flogs during the hoisting process. Many sailors prefer to ease the lines and gather the tackle together just behind the spar, keeping it there until it’s time to douse or reef the sail. Care must be taken to ensure that the lazy jacks are stowed tightly. Many a newly painted mast has been dinged by the small blocks used in lazy jack tackle, hardware that can slap relentlessly against the mast when a breeze fills in and the lazy jacks have been poorly stowed.

Reefing lines were easy to use on all of the systems we tested. The most user-friendly systems took into consideration the stack height of the cars used on the mainsail track, and incorporated a block, pendant, and jam cleat tack rather than a tack hook to engage the reef point. The real challenge in many of these setups, however, was how a crew could cope with extreme conditions and the need to set a storm trysail. Once again, the Dutchman system, when set up with an adjustable topping lift, provided for the easiest transition to a storm trysail. All that had to be done, once the mainsail was lowered, was to slacken the topping lift and gather up the loose monofilament line—this cleared the area aft of the mast and allowed the storm trysail to be easily set.

Mainsails up to about 250 to 300 square feet are easy enough to handle that flaking aids are optional rather than essential. Over this size, and up to about 500 square feet, any of the three options mentioned can be as valuable as an extra crew member. However, we found that the Dutchman system did get our most enthusiastic nod of approval, even though all three systems certainly improved mainsail handling significantly. Our testing revealed that the single set of mainsail-penetrating lead lines of the Dutchman system provided a more positive guide for the mainsail, directing it into a neatly flaked stack on the boom with fewer strings attached.

The fact that each of these approaches allows a crew to use a well-cut conventional mainsail is a big plus. There’s no need to succumb to an overly flat, roachless, in-mast furling mainsail, or a furling boom as heavy as an extra crew member. There is a point however, where the sheer size of the mainsail makes a mast or boom furling system a preferred option, and in a future issue, we will take a fresh look at how mast and boom-furling systems stack up and what new features they offer.