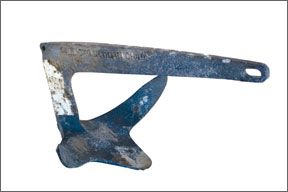 Once the test results of our first soft-mud anchor test hit the street in the February 2006 issue, anchor manufacturers continued to send us new hooks to test. Heres our latest follow-up.

Hunter Boat Anchors is a small, Florida-based company that produces three styles of anchors: plow, grapnel, and spade. We tested the spade. Like all Hunter anchors, the spade features a sliding collar on the shank that serves as the anchor line attachment point. This patented, sliding mechanism is unlike the anchor-line attachment on other anchors. It is designed to pull the Hunter out of the bottom backward, which reduces the damage to bay bottoms and seagrass beds. “That is what this anchor is all about,” said Hunter President Mike Moran. Hunter anchors are available in either stainless steel or galvanized steel.

The 25-pound Hunter we tested set right away in both scope tests and received two Excellent ratings for doing so. Holding power was high, too. It held 375 pounds at both scopes while dragging very little.

Our stainless steel test version costs an extravagant $586. In galvanized steel, the same anchor is still expensive, but drops to a more reasonable $352. Hunter warranties their anchors against breakage to only the original owner.

It performed well, and were impressed with the thoughtful, environmentally friendly design. But the Hunter is too expensive and has a weaker warranty than our previous top picks.

Powerhold anchors, built by the Marine Division of Indiana-based ERL Inc., are single-fluke, plow-style anchors. They feature welded construction of the fluke and shank base. The extended portion of the shank is bolted to the anchor and can move vertically a couple of inches to optimize the penetration angle.

ERL President Larry Wilkins explained how the system works: “The Powerhold series of anchors have an adaptive dive angle. This patented system allows the angle between the shank and the anchor body to change automatically depending upon the density or hardness of the seabed. We provide three different angle-control elastomers with each anchor. Typically, you install the correct one for your cruising

area when you get the anchor. The softest elastomer is for soft mud. The midrange is for soft sand, and the hardest is for hard, packed sand.

“By installing the proper elastomer, you can automatically optimize the dive angle, and hence maximize the holding power for a given size of anchor. If your boating area has very diverse bottom conditions, you always want to use the softest angle control elastomer. This will maximize the hold in the soft bottoms and degrade the holding somewhat in the hardest seabeds.”

All STL anchors are built from polished 316 stainless steel. Four sizes from 17 to 65 pounds are available. The 28-pound STL 350 we tested performed well. It received an Excellent set rating at both scope lengths and provided good overall holding power. Though it did drag several feet at both scopes, it still managed to hold 300 pounds at the short scope and 375 at the long. We sent the test results to Wilkins, who said he provided us with the hardest elastomer, which was the worst choice for the mud test. “The setting characteristics were not adversely affected, but the

maximum holding power was decreased substantially due to my error,” he said.

STL anchors carry a lifetime warranty against breakage and bending but are very expensive. The Powerhold 350 we tested is a whopping $995. According to Wilkins, a less expensive version of this anchor will be available within the next year.

The warranty is impressive, and the anchor performed well. We look forward to testing the less expensive model with its mud elastomer.

Illinois-based Ton Anchor makes its namesake anchor in three different weights: 15, 17.5, and 20 pounds. We tested the heaviest version of this cylinder-shaped anchor. The anchor line is attached to the Ton via a sliding ring that runs on a stainless steel bar extending nearly the full length of the anchors plastic-covered body. The weighted cylinder is capped at one end and the hollow section is cut into a scoop shape at the business end to dig into the bottom.

The Ton performed poorly in our tests. Even after trying three times, we could never get it to set or register any significant pull on our dynamometer.

Ton Anchor Manufacturing President Tom ONeil explained, “Our anchor is about [lighter] weight. Our product will not break boat or your back. Our anchor is for small boats up to 25 feet, as a lunch hook, [to] slow down, or stern anchor.”

The 20-pound Ton is quite cheap at $50. Lighter versions cost even less. Ton anchors carry a two-year warranty.

The Ton failed to perform in the mud bottom at our test site.

The Hunter and the Powerhold performed well, but neither eclipsed any of our previous top picks or Best Buy choices in mud-bottom testing. Even if the Powerhold was equipped with its mud elastomer and hit 500 pounds for a max pull, it still would only tie the best anchors of previous tests. And the hooks we tested earlier are less expensive. For anchors from $200 to $500 (April), we recommend the HydroBubble and the XYZ. In our test of less expensive anchors (under $200), we liked the original Bruce and its knock-off, the Claw, and Danforth-style hooks from West Marine and Tie Down Engineering.