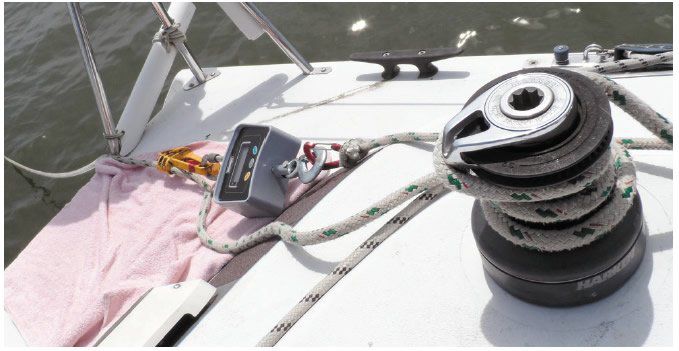 Each anchor was pulled in both a straight line and at 90 degrees in both soft mud and firm sand at a 10:1 scope. All findings regarding load were recorded with a calibrated load cell.

Testers performed the 90-degree test by lightly setting the anchor (with a 15-pound load in mud, 40 pounds in sand) and then slowly pulling at a 90-degree angle, as though the wind or tide changed. Additionally, each anchor was used day-in, day-out aboard an inflatable dinghy to evaluate ease of use and real-world effectiveness.

To push the limits of these anchors, we also used both the Guardian G5 and Mantus Dinghy Anchor as lunch hooks in good sand for an 8,000-pound catamaran. We wanted to see how they responded to surging and shifts over a period of hours, under what would amount to storm loads for a dinghy anchor.

We used a 10:1 scope in 4 to 6 feet of water and a polyester rode to avoid the damping effect of chain, inducing shock loading similar to a chain stretched tight by a powerful squall, exacerbated by the steep chop of shallow water. Both held through significant shifts in winds up to 15 knots in an exposed anchorage.

The Mantus began to slowly drag when gusts hit 20 knots, while the Guardian simply kept digging deeper. Results were impressive for bits of metal weighing little more than a paperweight. Needless to say, anchoring a 34-foot catamaran with a 2-pound anchor is a dumb idea that we would never recommend.