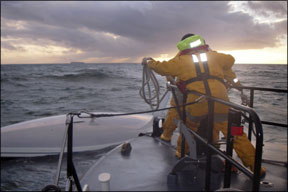 Whats happening here? In June, the Cynthia Woods, a Cape Fear 38, lost its keel while racing in the Gulf of Mexico. One of the crew members, Roger Stone, died while helping his crewmates evacuate. That same month, a J/80 lost its keel during a race on Long Island Sound. Thankfully, no one was hurt in that incident. Both accidents are still being investigated.

The fate of the Cynthia Woods recalls other accidents involving lost keels. Hooligan V (pictured above), a Max Fun 35, lost its keel off the coast of England while racing in May 2007. In 2005, a Bavaria Match 42 lost its keel while racing in the Med. In each case, one of the crewmembers died.

Just two months prior to the Cynthia Woods incident, the International Sailing Federation (ISAF), the governing body for international racing, issued a notice regarding a “spate of keel failures” that was prompting a re-assessment of acceptable criteria for design and construction. Practical Sailors special report on hull strength (August 2007) highlighted similar concerns. According to the ISAF statement, the International Standard ISO 12215, “Hull Construction and Scantlings for Small Craft,” shall now be the prevailing certifying standard for hull construction. Previously, the ISAF accepted a variety of standards.

swims in a sea of acronyms for the agencies that are in the business of certifying products. We know from experience that these standards, while helpful, are an imperfect way to judge product quality. Manufacturers can bend a standard in their favor, rapid technological change can make a standard obsolete, or an overzealous committee could zero-in on a nonexistent problem.

Two articles this month prompted me to reflect again on the role of certifying standards that apply to boats and sailing equipment. One is our review of the new Navy 44 MkII, a boat whose enviable design and construction process took no standard for granted. We are fortunate to have one of the key players in that project, Ralph Naranjo, as a part of our team here at Practical Sailor.

The second article where standards come into play is our updated review of combined inflatable life jacket (PFDs)/safety harnesses. As the article points out, ISAF recently made crotch straps mandatory on PFDs. US Sailing, the national governing body for racing in the U.S., however, wisely kept crotch straps as “recommended.” In our experience, crotch or thigh straps have several drawbacks, the most notable being that they make the PFD more difficult to don. As an option, they are fine (check the foredeck crew in the photo above), but were not convinced they should be required for adult PFDs.

Personally, Id rather have the safety experts spend more time looking at the keels and hulls of todays production boats than debating what belongs between a sailors legs. 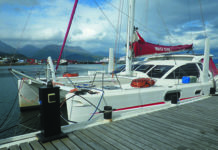