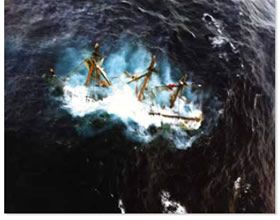 The Oct. 29, 2012, sinking of the HMS Bounty off the coast of North Carolina during Superstorm Sandy left 14 crewmembers injured and shaken, one crewmember dead, and the captain missing, presumed dead.

The 108-foot ship, designed and built for the 1962 movie Mutiny on the Bounty, sank before dawn about 130 miles southeast of Cape Hatteras, N.C., after being battered by Sandys 30-foot seas and 100 mile-per-hour winds. Several hours after the sinking, Coast Guard helicopters rescued the crew members.

The events have been well-publicized, but it was Michael Tougias and Douglas Campbells retelling of the tragedy in the Rescue of the Bounty: Disaster and Survival in Superstorm Sandy (Scriber, April 2014, $18, $11 Kindle) that prompted us to dig into it to see what lessons could be gleaned from the loss and passed on in Practical Sailor. In addition to a short review of Rescue of the Bounty, we offer here synopses of other Bounty-related books, media accounts, and government reports, and a look at how the event itself was addressed by each outlet or entity.

Still in the works is a final report by the U.S. Coast Guard, which is expected to offer some safety recommendations and possibly new USCG rules or restrictions.

HMS Bounty in the Media

Currently, there are two paper-printed books and one Kindle-single electronic book published about the 2012 Bounty sinking. Practical Sailor reviewed Gregory Freemans The Gathering Wind: Hurricane Sandy, the Sailing Ship Bounty, and a Courageous Rescue at Sea, (New American Library/Penguin Group, 2013, $20, $11 Kindle) in the January 2014 issue. The book takes a narrative approach to the loss of the Bounty and the dramatic, courageous U. S. Coast Guard rescue of most of the ships crew, and offers an in-depth look at the death of crewmember Claudene Christian and the loss of the skipper, Capt. Robin Walbridge.

The Sinking of the Bounty: The True Story of a Tragic Shipwreck and its Aftermath (The Atavist, 2013, $2 Kindle edition), by Matthew Shaer, runs approximately 54 pages and draws on interviews with Bounty survivors and Coast Guard rescuers. Shaers journalistic drama reconstructs the ships final voyage, the dramatic night-time capsize, the Coast Guard rescue, and the investigation that followed.

Rescue of the bounty

Tougias and Campbell present the most riveting account we have read of the Bounty capsize and Coast Guard rescue. Part I of the three-part Rescue of the Bounty: Disaster and Survival in Superstorm Sandy sets the scene with background on the captain, crew, and the ship itself. Part II meticulously takes us through the building storm and mounting trouble onboard as the ships systems began to fail in the pounding seas and driving wind. By the end of the section, an injured captain and crew have lost control of the ship, and the Bounty, listing heavily as it fills with water, capsizes in the seas.

What follows in Part III is an amazing account of crewmembers being catapulted from the decks, sliding down the lurching hull, and jumping into the sea. Several crew jumped clear of the ship, only to get caught up on gear, lines, and the mizzen mast. Tougiass description of crewmembers struggling in their survival gear, and being sucked down by debris caught on their harnesses, echoes several other accounts. His storytelling of the Coast Guard rescue is cinematic and stunning, focusing on the pilots, the ships crew, and the unbelievable heroics of the rescue swimmers.

Lessons of the bounty

Capt. G. Anderson Andy Chase, in the July/August 2013 issue of Wooden Boat Magazine (www.woodenboat.com), wrote an excellent assessment of the Bounty capsize and rescue, highlighting lessons that can be learned from the tragedy.

In the article, Lessons of the Bounty: Drawing experience from tragedy, Chase lays out the background of the ship and the crew, some of whom he knew personally. A professional sailing teacher at the Maine Maritime Academy in Castine, Maine, Chase also was an aquaintance of Capt. Walbridge. Chase described the skipper as a kind and earnest teacher.

After introducing the players involved, Chase points out some significant facts. The Bounty was over 50 years old and had just been through an extensive re-fit. The short-handed crew got underway in a hurry, and many had little experience. The long-range weather forecast was poor to terrible. As the bilges filled with water from leaking decks and hull, the bilge pumps were unable to handle the ingress. Tired crew members became injured more easily.

Chase delves into bridge resource management, and how the leadership model can be used in distress situations. He refers to the U.S. Coast Guards risk assessment model and says, …You must be able to assess and evaluate all the things that make up your margin of safety, and acknowledge each failure of equipment or loss of function that chips away at it. It is critical that they be viewed in sum, not in isolation . . . You must build in safety margins deliberately, and recognize them when they fall away.

The Last Voyage of the bounty

Award-winning Tampa Bay Times staff writer Michael Kruse penned a three-part interactive series on the Bounty, The Last Voyage of the Bounty, which was published on the TBT website (www.tampabay.com) in October 2013. The character-driven narrative depicts how the events unfolded, with some contextual background, and sidebars including information on the specifications of the Bounty, the Coast Guard planes, and the path of Hurricane Sandy.

The newspaper story focuses on the human drama of the disaster and the heroic rescue. It includes testimony from the Coast Guard hearings and interviews and suggests probable causes, however, its aim was clearly not to provide readers with seamanship lessons or to be used as a model for assessing storm tactics. Although it infers that mechanical breakdowns and questionable leadership were at the root of the tragedy, it does not offer advice on how to avoid a similar fate.

Well-written and engaging, Kruses series was a finalist for the American Society of News Editors Punch Sulzberger Award for Online Storytelling.

Kathryn Miles, author of All Standing: The Remarkable Story of the Jeanie Johnston, the Legendary Irish Famine Ship (see PS January 2013 online), casts a critical eye on the Bounty sinking in her article, Sunk: The Incredible Truth about a Ship that Never Should Have Sailed (Outside Magazine, April 2013, featured on www.outsideonline.com in February 2013). She proposes that the Bounty should never have sailed: What was a 52-year-old, leaking replica doing in the eye of a storm? she asks.

Miles begins with the Coast Guard rescue and suggests that when playing the blame game in the incident, questions over Walbridges rash decision to leave port ahead of a hurricane should take a back seat to the overall condition of the ship and the responsibility of the ships owner, Robert Hanson.

Rather than looking closely at the personalities of the crewmembers and their individual experiences during the storm as the other media accounts do, Miles addresses the hull limitations and describes Walbridge as one who operated in the margins. She points forward to the anticipated results of the Coast Guard findings and suggests that the hearings will address whether Walbridge was capable of making sound judgments, both before leaving the dock and after he was injured.

Miles concludes that the loss of the Bounty under these circumstances affects the future of tall ships. The Coast Guard could choose to enact more rigorous regulations, seeking to reel in these ships sailing out on the fringe.

The Coast Guard website (www.gocoastguard.com) gives a succinct wrapup of the facts of the rescue, written the day after the event, Oct. 30, 2012. We highly recommend checking out the summary.

The National Transportation Safety Boards Marine Accident Brief, released Feb. 6, 2014, is important reading for anyone trying to understand the loss of the Bounty. The report includes an accident summary, lists probable cause, and features a downloadable PDF of the extended report. (See www.ntsb.gov/investigations/fulltext/MAB1403.html.)

The NTSB report is based on interviews with surviving crewmembers, the Coast Guard, shipyard employees, weather forecasters, rescue swimmers, and pilots.

The sinkings probable cause is explained in the report: The NTSB determines that the probable cause of the sinking of the tall ship Bounty was the captains reckless decision to sail the vessel into the well-forecasted path of Hurricane Sandy, which subjected the aging vessel and the inexperienced crew to conditions from which the vessel could not recover. Contributing to the sinking was the lack of effective safety oversight by the vessel organization.

Few sailing dramas have been parsed so quickly by so many various sources, offering insight into the challenges that the modern sailor faces. Because so many of the decisions in the Bounty case were linked to poor judgement before leaving port, Practical Sailor is working on several studies covering pre-departure topics, beginning with a nuts-and-bolts article recognizing reliable weather forecasts and choosing a weather window for departure.