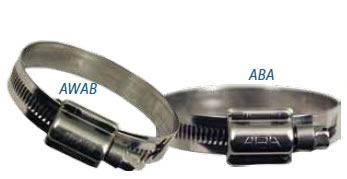 General-purpose, relatively inexpensive hose clamps are all over most boats, but there are some applications where using a higher quality, corrosion resistant clamp is critical-such as engine hoses and through-hulls.

Most quality clamps are stamped stainless steel, but there are many grades of steel, and making an alloy stainless and corrosion resistant is complicated and costly. You start with iron, which rusts easily, and through multiple processes, you add proportions of elements such as nickel, manganese, molybdenum, and chromium. Different percentages of these elements will improve the desired strength, hardness, and flexibility, as well as corrosion resistance, of the steel.

Without getting too technical, with some of these additional materials, the steel becomes less magnetic. In general, the less magnetic a metal is, the less likely it will corrode, although some exceptions exist. Using a magnet to test for this usually shows a better grade stainless steel-but not always.

A hose clamp comprises three components: the band, the bolt, and the bolt housing that holds them all together. Each can be made of different steel, and some nuts and bolts may be brass. Since the bolt housing is usually thin, stamped metal, it may be the weakest link.

To find out which hose clamps can be considered high quality, we launched a long-term test of stainless-steel hose clamps from 11 manufacturers at the end of 2012. (See PS February 2013 online.) Heres an update on our findings.

The test field included clamps from Shields, ABA, Murray, AWAB, Breeze, American Valve, Ideal/Tridon, Trident, Koehler, and Norton. We tested sizes 28 (for hose sizes 15/16 to 2 inches) and 32 (for hoses 1 to 2 inches), so prices arent directly comparable, and some are sold only in boxes of 10.

Two of the test clamps, the Shields 720-2000 and the Trident 720-2140, are the smooth-banded T-bolt design. T-bolt clamps are typically more expensive than regular hose clamps, and because they are only available in larger diameters, they are best suited for use at the marine head outlet or in exhaust systems.

Seven of the test clamps are tightened via a worm-screw mechanism with a regular bolt, bolt housing, and a perforated band. The other two worm-drive clamps, the ABA and AWAB, feature bands with embossed indentations rather than perforated holes.

Our test included an initial bench test, followed by long-term exposure testing. We started the bench testing with a simple magnet test of the whole hose clamp, then its individual components like the bolt and bolt housing. (Testers noted the results in the accompanying Test Results table.) Some parts showed no magnetism, and others-the screws, in particular-showed varying degrees.

Testers also measured the thickness of the metal bands with a digital micrometer. All clamps were closely examined and compared for quality of construction and workmanship.

To measure the failure point, we tightened the clamps on a PVC pipe until the hose clamp broke or began to slip. Based on our experience, corrosion is the chief cause of failure, so we were most interested in the clamps resistance to corrosion.

For the second round of testing, we torqued each clamp to 60 pounds. All but two of our test clamps survived this final test.

The two heavy-duty T-bolt design clamps, made by Shields and Trident showed enough tarnish to warrant close monitoring, but they still worked perfectly. The bolts and nuts were clean and worked perfectly.

One of the worm-screw clamps that also showed just a little tarnish but worked fine was Murray. Four other clamps (Breeze, Ideal/Triton, Norton, and All Stainless) all showed significant corrosion on one or all of the component parts. None of these clamps failed during our torque test, but if you saw these on your boat, you would definitely consider replacing them. Two (American Valve and Koehler) showed considerable corrosion after only a few weeks in the salt bath and significant corrosion on the bolt and housing after 18 months. Both failed the torque test because the bolts were seized.

Our two winners were the clamps from ABA and AWAB. These nearly identical-looking clamps use 316-grade stainless steel, were completely non-magnetic, use stamped serrations instead of cut-through perforations, and now have the same parent company. Practical Sailor gave them our Best Choice rating back in February 2013, and an Excellent in our 18-month followup.

The two T-bolts, Shields and Trident, cost over $10 each, and the ABA and AWAB were more expensive than any of the other worm-gear clamps at about $5 each. However, the ABA and AWAB are clearly made of higher-quality materials, are constructed well, performed smoothly with good compression, and excelled in our long-term corrosion test by showing no signs of tarnish. Practical Sailor recommends either of these hose clamps for all on-board general purpose and critical use applications. For extra measure of security, it is recommended that you put two hose clamps on each hose-fitting union that is below the waterline when the boat is heeled.