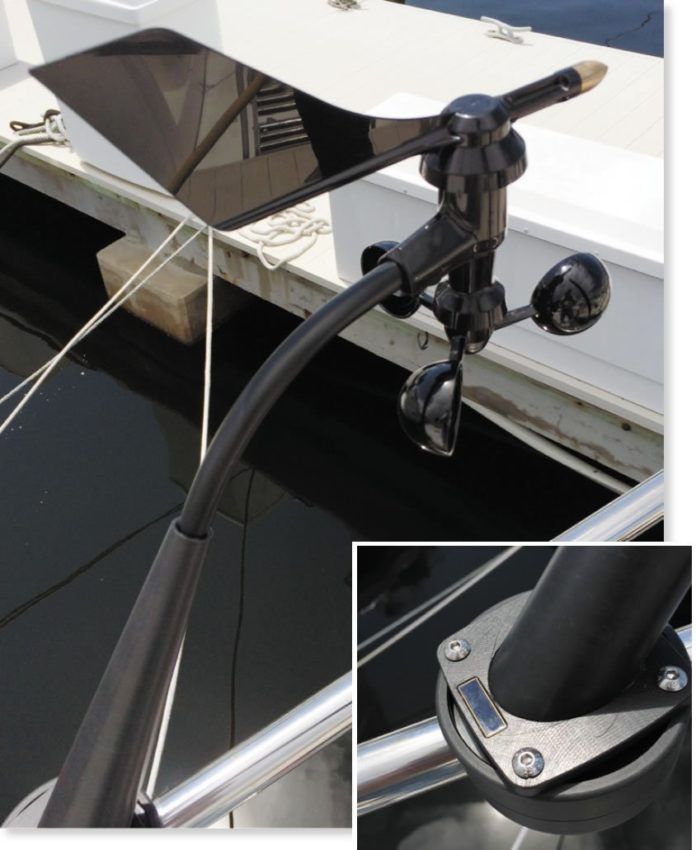 Wireless wind sensors offer many advantages for the sailor. In recent years, weve tested Raymarines Tacktick, the Nexus Gwind, and the Sailtimer. (See PS March 2014, Wind Sensor Testing online, as well as the followup articles in the May 2014 and August 2014 issues.) All worked well, but some were certainly better than others. Features we rated included durability, battery life, accuracy, ease of use, and ease of installation. One interesting new entry into this field is the Calypso Cups 4.0 system, which combines a Davis Instruments wind sensor with a user-friendly smartphone app.

The basic Calypso system uses either an Android or iOS mobile device as its display, although an optional NMEA 0183 interface to link to your existing NMEA display(s) is available. The Calypso system we tested came with a very sturdy and versatile mounting system. It can be rail mounted, as we chose to do for our test, or it can be mounted on the side or at the top of the mast using a supplied bracket. Although the Davis sensor was not the best sensor in light winds in our previous tests, it is well built and will serve most sailors just fine.

The base of the wind sensor contains a small, embedded solar panel that charges an internal battery capable of 2,000 charge/discharge cycles and is specified at 260 milliamps. Power consumption is tiny: 10 microamps on standby and 100 microamps when operating.

To communicate with your phone, the sensor has a low-power Bluetooth transmitter with a range of about 150 feet. Our unit was able to stay connected (direct line of sight) to an iPhone at distances well beyond the claimed range. This bodes well for most mast installations, as long as there is a reasonable line of sight between the unit and your smartphone or digital tablet. With the unit mounted on the bow rail of our test boat, we got clear signals everywhere on the boat, even below deck.

With the NMEA option, the system sends its data to the boats NMEA 0183 network and can receive NMEA data from other networked devices, relaying it via Bluetooth. The maker said its latest app release would allow any networked NMEA data to be displayed through the app.

The bow-rail installation was straightforward, and the high-density plastic mount was rock solid. The cups and wind vane attach to the mount with setscrews that can be tightened with a small hex key (included); the metric hex keys were the only tools needed for installation.

Operation and setup were intuitive; testers never felt the need to look at the instructions. The app downloads from either iTunes or Google Play. When you first open the app, it asks for permission to use your phones GPS. You turn on your phones Bluetooth, pair it with the Calypso, and it starts working. The Calypso system is also compatible with other apps such as iRegatta, Sailracer, and eStella as well.

Wind data is viewed in two modes. Basic mode has a traditional analog-style gauge showing wind direction and heading. The numeric wind speed and ships speed-over-ground appear below that. If mapping is enabled, Google Maps shows the boats position on a satellite map. Tridata mode is strictly numerical, showing wind direction in numerical compass degrees, along with wind speed and boat speed. Both modes show either apparent or true wind values.

Bottom line: Testers liked the Calypso wireless wind system, and we expect it would hold up well in day-to-day use. It is well designed, solidly built, and easy to mount. The $570 price tag puts it within range of other comparable units like the Sailtimer. The NMEA 0183 option ($180) allows it to pair with an existing multi-function display (and allowing it to send and receive networked NMEA data, and to relay it via Bluetooth); the total price with this option is about $800 with a mount, which is also competitive with mainstream sensors from Raymarine, Garmin, and B&G. PS still leans toward wired devices for their reliability, but if you have no desire to run wires up your mast and like being able to track wind on either a smart-device or your NMEA-compatible display, the Calypso makes sense.

Calypso also has a new ultrasonic wind sensor in the works. The Bluetoothed, self-powered wind reader will be much smaller and have no moving parts, making it well suited for dinghy and other small-boat sailors. Stay tuned for our review.