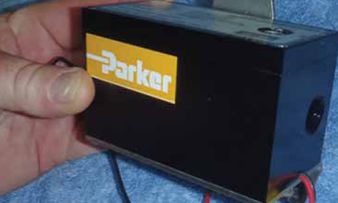 No good ever comes of fouled diesel fuel. And while it’s true contaminated fuel affects rag-bagger and stinkpotter alike, sailors have to be particularly vigilant due to lower engine run time (and less fuel turnover) than their powerboating brethren. Passive treatments such as fuel additives help to a degree, but one of the best ways to keep fuel free of contamination issues like condensation buildup—and the bacteria growth it promotes—is fuel polishing. Fuel polishing in its most basic form is the act of circulating the diesel in your tank through a filter.

Always looking to simplify boat—and engine—maintenance, we decided to check out the Parker (Racor) FPM-050 Fuel Polishing Module, which is advertised as a simple way to integrate fuel polishing into an existing fuel system. The FPM-050 is designed to be plumbed into the fuel supply line between the existing primary fuel filter and engine (i.e. on the suction side of the fuel pump, immediately downstream of the filter). A third outlet (the polished fuel return) is plumbed into the engine fuel return line. The FPM-050 incorporates an automatic full-flow bypass valve (eliminating the need for manual switching when installed in the primary fuel line), but it can also be installed as part of a separate, dedicated fuel maintenance loop.

The FPM-050 utilizes a solid-state piezoelectric pump that contains no moving parts in the traditional sense—like rotating shaft seals that can wear over time and leak. It draws 150 mA per hour and pumps 50 gallons of fuel every 24 hours. Two gallons an hour doesn’t seem like a lot, but the concept here isn’t to polish a lot of fuel quickly. It’s more akin to a battery trickle charger, allowing you to slowly polish the fuel supply over days or weeks at a time. Add the optional programmable controller, and you can schedule automatically timed fuel-polishing sessions, even while you’re away from the boat.

At 3.6 Ah/day, most boats should be able to afford the FPM-050 from a power consumption standpoint, even if used continuously (while hauled or during the off season), although this wouldn’t be a concern for those with shore power. For those off-the-grid boats that can’t spare the amps, the FPM-050 can also be powered by a small solar panel.

The FPM-050 comes with a one-year warranty and retails for $395, but it does not come with fittings, hose clamps, etc. Parker does sell kits that contain optional items such as filters and a timer.

For testing, PS plumbed the FPM-050 to recycle fuel into a container for seven days. Clear instructions and 9-inch power leads make the unit easy to install, but you will need to buy all mounting hardware and fittings separately.

Its flow rate was comparable with that advertised by the manufacturer. The FPM-050, by design, is not a “powerhouse” polishing unit, meaning tanks that are badly contaminated with sludge and gunk would first need to be emptied and cleaned. Measured noise levels were low, and even if it were operated for extended periods, its noise likely would not be noticed by those onboard.

Bottom line: The Parker FPM-050 is an easy, economical way to retrofit most any vessel with fuel-polishing capability. It would be a great preventative tool to help maintain a healthy fuel system. However, plumbing a mini-continuous duty pump into a primary filter likely will result in the need to replace the filter more often because it’s doing double duty. It also means more connections are plumbed into the suction side of the system, a potential source for air leaks.

The automatic fuel polishing feature and ability to leave the pump running with no one on board will be a selling point for some, but we’re not big fans of having any type of fuel pump running without adult supervision.

In April 2007, we reviewed KTI Systems’ FilterBOSS (www.ktisystems.com), a modular dual fuel-filter system with a fuel polishing feature that can be added to an existing system or bought as a full pre-mounted system (the 500FG Dual Filter Package). FilterBOSS has replaced the 500FG with a more expensive $2,162 Commander FC60, a dual-filter model that offers the same fuel polishing option as the 500FG.

Comparing the Parker FPM-050 to the FilterBOSS FC60 is tough. The Parker can clean about 50 gallons of fuel per day, while the FilterBOSS’s flow rate is 25 to 30 gallons per hour. The FilterBOSS also includes dual Racor filters, which lets you easily switch filters if one gets clogged. The Parker—or any fuel system—can, of course, be modified to take two primary filters. It’s a handy option for cruisers who do a lot of motoring.

The Filter Boss is a higher capacity polisher, and the value of keeping the polishing fuel cycle separate from the fuel delivery loop is a big plus.